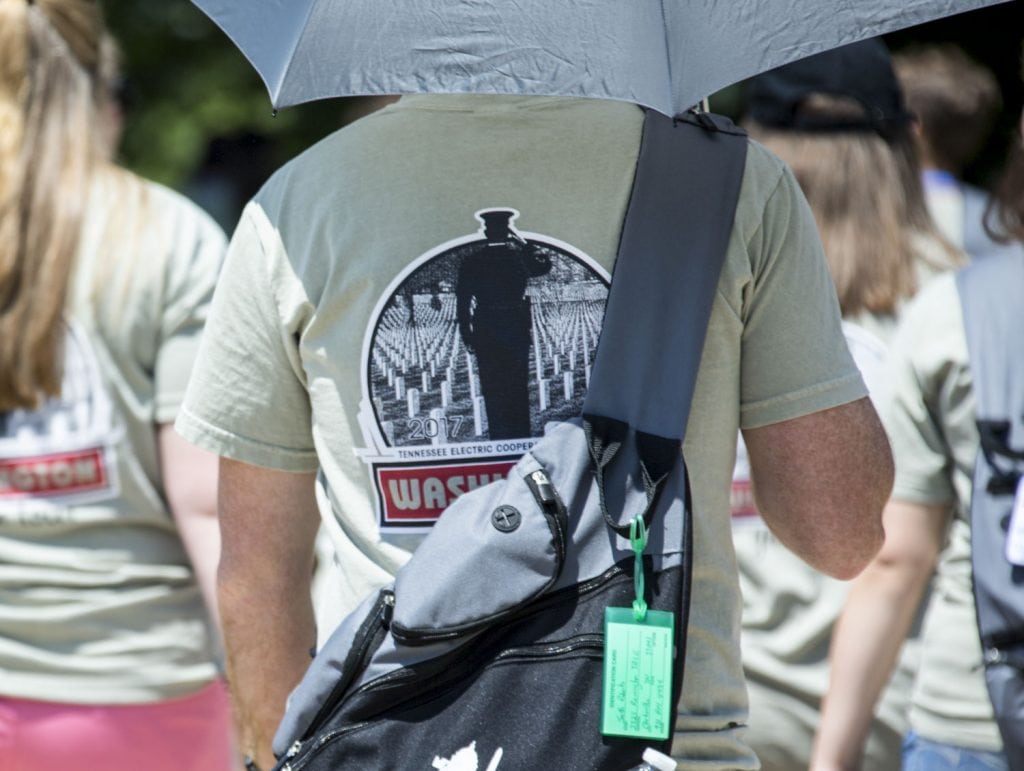 Over the past 50 years, Tennessee’s member-owned electric cooperatives have sent thousands of rural youth to Washington, D.C. The frequently heard description from current and past participants is that each June’s Youth Tour is truly “the trip of a lifetime.” It mixes a glimpse into our nation’s past and the opportunity to meet the political leaders who are building our future.

Much of the “sightseeing” is educational — designed to strengthen the character of these young leaders. Students spend time learning at the homes of our founding fathers: Monticello, home of Thomas Jefferson, and George Washington’s Mount Vernon. They also visit Arlington National Cemetery, final resting place for men and women who helped defend and preserve our nation.

I’ve enthusiastically joined the tour the last three years. Each day, we wear similar shirts to give the students a tidy, uniform look and help busy chaperones keep track of everyone. On the day we went to Arlington Cemetery this year, our group also visited the National Holocaust Memorial Museum. As our students moved through its hallways, a man approached and asked who we were. Our shirts had caught his eye.

This happens periodically on the trip; people are curious about a large group of teenagers and adults — all dressed alike — and want to know more. The students making up our large group are frequently complimented on their behavior and appearance.

The man and I talked for a few minutes. I explained who we are and gave him a brief overview of electric cooperatives. As we ended our conversation, he pointed to the shirt of a student. “That’s me,” he said. “My last tour was at Arlington.”

I thanked the veteran for his service, and we continued on our ways.

Later that day, at Arlington Cemetery, I thought about that chance encounter. Our students were solemnly watching the changing of the guard at the Tomb of the Unknowns. If you’ve never observed the ceremony, it is a powerful event. A few hours earlier, a former solider from that detail had been watching us. That precision-trained, dedicated soldier was impressed by a group of our high school students.

Throughout the seven-day visit, we can’t be certain what aspect of the tour will have the strongest impact on the students. It could be the dedication to duty of Gen. Washington, the genius of Thomas Jefferson, the marble memorials to past conflicts and heroes or the recounting of the political movement that led to the Holocaust. It is the sum of the trip as well as the individual moments that we hope make an indelible mark on each student’s life. Hopefully, the lessons learned will help each student grow and mature in character. Going forward, these students will have opportunities to make an impact on their communities — just like they did for an old soldier that day.