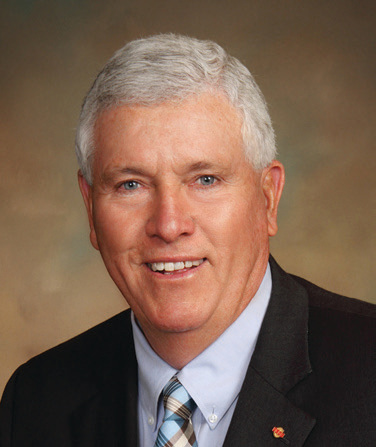 Let us say a final thank you to Gordon Bone. Our veteran board member and longtime chairman passed away suddenly in July. He was 77.

I will take a personal privilege to start, though I will fall short in adequate expression. Mr. Bone (he preferred Gordon) was a mentor, adviser, encourager and friend. His help was fundamental in the opportunities I have been blessed to realize at Middle Tennessee Electric. I am further motivated to do my best in the position I am so honored to occupy in hopes of honoring his memory and encouragements. Thank you, Gordon.

Let our board of directors say thank you. There are many examples of Gordon’s leadership for which our directors are grateful. These include a demonstration of selfless leadership in 2015 when Gordon stepped down as chairman. Even though his fellow directors were happy for him to continue, he was conscientious of not overextending his capacity, so he told the board he would not accept another term.

Let MTEMC’s employees say thank you. Gordon always had a special appreciation for our employee team, and he was always determined to support them. His leadership over the years helped make MTEMC a great place to work where team members enjoy competitive wages and benefits and a servant’s heart culture.

Let MTEMC’s members say thank you. Directors are elected, representative voices of the cooperative’s members. Gordon rewarded our members’ trust by being a model board member. He championed member satisfaction, and he was always careful to consider how decisions affected the most vulnerable.

Let our communities say thank you. It was Gordon’s passion and leadership that should be most credited for establishing MTEMC’s charitable arm, SharingChange. It was fitting that just before Gordon’s passing, we began the celebration of achieving the $10 million mark in contributions to charities and community causes. What a tangible difference his leadership helped produce.

And let many others say thank you. As we attended his visitation and funeral in Lebanon, attendees represented all walks of life. As they paid respects to the family, there were so many accounts of tokens of kindness Gordon had bestowed, unknown to even his beloved family — wife Patricia, children Hal and Suanne, and five grandchildren.

Harold Gordon Bone was a native of Wilson County and a graduate of Lebanon High School, Cumberland University and the University of Tennessee. He served on many bank boards and was a leader for several nonprofit agencies and foundations like the Crohn’s and Colitis Foundation of America. He was a businessman, lifelong farmer, charter member of the Lebanon Breakfast Rotary Club and elder at Lebanon First Presbyterian Church.

So, while we say a final thank you to Gordon, let it also be a perpetual one … because the mark he left on Middle Tennessee Electric and so many of us will last forever.

FILLING A VACANCY ON THE BOARD OF DIRECTORS

Anyone interested in filling the vacant seat should submit his or her name and contact information to MTEMC’s managing counsel, Denise Miller, before the close of business on Friday, Sept. 20, 2019. Miller can be reached at [email protected] or by mail at 555 New Salem Highway, Murfreesboro, TN 37129. To be eligible for consideration to fill this vacancy, such persons must reside in District 4(B). Following Sept. 20, the Nominating Committee will meet and select a replacement director from the list of eligible candidates who have come forward.