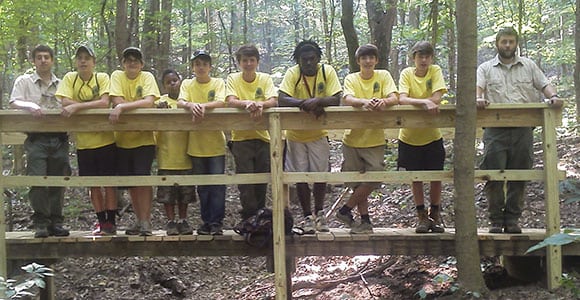 Ask a kid what he wants to be when he grows up, and chances are you’ll get classic answers like fireman, police officer, ballerina or professional athlete. They come up with these answers because they’ve seen adults in these professions. They love to dress up and pretend they are those things now. But through the Junior Ranger programs offered by Tennessee’s state parks and the National Park Service, those youngsters can learn about the great outdoors and the history of parks on their way to earning their very own park ranger designation.

The purpose of Junior Ranger programs is to introduce children to all the various aspects of state and national parks — their rich biodiversity, their history and the recreational opportunities available. When a child has completed all other requirements to become a Junior Ranger on the national level, he or she takes an oath in which they pledge to appreciate, respect and protect all national parks. That goal of generating a lifelong appreciation for parks can be applied to these programs at all levels.

“When they take the pledge, we have them raise their hand and repeat it,” says Park Ranger Burke Greear at Andrew Johnson National Historic Site in Greeneville. “It’s a good photo opportunity for the parents.”

Greear says that at parks that have heavy visitor traffic, the sight of kids taking the Junior Ranger pledge often results in applause from other visitors.

At the state level, the program is for ages 6-14. The first, easy step is to simply stop by a park office or visitor center to pick up a “Junior Ranger Get Outdoors Adventure Guide.” Or a PDF file of the guide can be downloaded at tnstateparks.com/get-involved/jr-rangers in advance of a park visit. The guide includes a listing of the duties of a Junior Ranger, things such as protecting the parks by staying on trails and encouraging others to visit state parks. The different age levels have different tasks that must be completed to earn a Junior Ranger designation. These tasks fall into the categories of history, plants, wildlife, astronomy and water. Other steps toward becoming a Junior Ranger include completing a safety section in the guide, performing a stewardship project and finally taking the Junior Ranger pledge to receive your Junior Ranger badge. Children can learn about opportunities for stewardship projects by asking one of the park rangers on duty.

Another way to earn a Junior Ranger badge is to attend one of the Junior Ranger camps. According to Laura Franklin with Tennessee State Parks, 32 camps were held at 29 parks last summer.

“Burgess Falls is one of our most popular programs,” Franklin says. “It was one of our very first camps and won the Governor’s Environmental Stewardship Award for Excellence. It tends to fill very quickly.”

In fact, three of the four camps at Burgess Falls, all held in June, were filled by mid-April with only a few spots left in the fourth. The best plan for those wanting to attend a camp is to call the park you’re interested in and inquire if it hosts a camp and, if so, if there are any spots available. If not, you might want to put it on your calendar to call well in advance next year.

Kids wanting to become a state Junior Ranger don’t have to take part in a camp to do so.

“The program can be self-guided,” Franklin says. “They can complete it over multiple visits at multiple parks. Once they have completed all of their requirements, they can be sworn in by any of our park rangers.”

One facility that’s hosting its first camp this year is Standing Stone State Park in Hilham. The day camp set for July 30-Aug. 2 is limited to 50 participants and will include activities such as fire-building, tomahawk-throwing, plant identification, crafts, basic first aid and paddling across Kelly Lake.

“We hope to ‘unplug’ the kids for the day and educate them through these programs while they’re having fun,” says Park Ranger Keifer Helle. “We always talk about making memories, and I hope that by the end of the week, when they go home, and when school starts, that their time at Standing Stone for the Junior Ranger week was the highlight of their summer.” 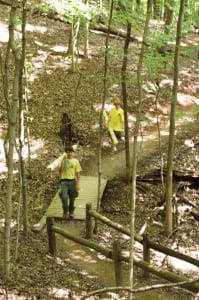 The camp is the launch event for the park’s Junior Ranger program, which will have a lot of interesting programming to offer in fields such as astronomy, history, wildlife, safety and much more.

A different type of Junior Ranger program available at Radnor Lake State Natural Area in Nashville is a summer internship program currently in its 12th year that is modeled on the national AmeriCorps program. Radnor Lake’s program is funded through private dollars with the partnership of the Friends of Radnor Lake. The program’s activities focus mainly on trail work, water quality and some educational events.

“We’re the only park I know of that does this kind of program,” says Steve Ward, park manager at Radnor Lake, in describing the Junior Ranger Intern Program. “We actually pay the kids a stipend, and they are required to do trail work. Working with these young men and women is the high point of our summer.”

Tennessee is also home to several units of the National Park Service, which has its own Junior Ranger program for ages 5-12. Booklets with required activities are available at park visitor centers for different age ranges within the overall group. Though kids can become NPS Junior Rangers any time of the year, ranger-led programs designed with aspiring Junior Rangers in mind are available from spring through fall. These special programs showcase the diversity within each park. For instance, since Great Smoky Mountains National Park is rich with flora and fauna, programs focus on topics such as salamanders, black bears and the abundant wildflowers. Other parks with a wealth of Civil War history such as Shiloh National Military Park will have programs geared more toward the war, what life was like during that time in American history and related topics.

Greear says the basic part of the Junior Ranger program is similar nationwide, with kids earning badges specific to the parks where they complete the program. But for aspiring rangers who go above and beyond, there are a wealth of patches to be earned that can be affixed to a vest, much like you see with other organizations such as Boy Scouts and Girl Scouts. For instance, the special Junior Civil War Historian patch will only be available through 2015 and commemorates the sesquicentennial (150 years) of the Civil War. To earn the patch, kids have to visit three different Civil War-related parks that are participating in the patch program and complete the required activities. Or they can visit two of these parks and complete one online activity at the Junior Civil War Historian site. More than 20 parks are participating in this special patch program, seven of which are located entirely or partially in Tennessee.

The Junior Civil War Historian patch was the brainchild of Jim Lewis, a park ranger at Stones River National Battlefield in Murfreesboro.
“As we were coming up on the sesquicentennial of the Civil War, we were looking for ways to use this special time to encourage people to visit several parks and help them understand the connections between these parks and the events,” Lewis says.

Nine parks in the Southeast got together and received some grant money to develop the special program and patch, and from there it expanded to other parks. Lewis says he got the idea from seeing a previous program for a Junior Archaeologist patch. The Junior Civil War Historian program has been successful, considering that nearly 3,000 kids have completed the requirements so far.

Activities and the types of history and conservation efforts will also vary from park to park because some are dedicated to preserving Civil War history while others such as Great Smoky Mountains National Park are focused more on the natural world.

At Cumberland Gap National Historical Park, Supervisory Park Ranger Carol Borneman says staff members see in Rachel Carson’s “A student is a candle to be lit, not a vessel to be filled” the perfect metaphor for its Junior Ranger Program. “The park’s free ‘Junior Ranger Activity Book’ is designed to engage youngsters and young historians in discovering the significance of the Cumberland Gap as the nation’s first doorway to the west,” she says.

Borneman says the workbook for aspiring Junior Rangers at Cumberland Gap is chock-full of cool activities such as Pioneer Playhouse, best completed by youngsters visiting the park, where they can don pioneer clothing and touch bear and other animal pelts; Operation Overlook, which encourages youngsters and their parents to visit the Pinnacle Overlook for a commanding view of the historic passageway itself; and Beat Brush Mountain, a tribute to those folks who, in the early 1900s, moved to the top of Brush Mountain in what is now the park. Adhering to the pioneer lifestyle, these self-sufficient people walked nearly five miles to leave Brush Mountain to go into town for supplies. At first, there was no clear route off the mountain. Settlers had to create trails that could be navigated by foot. The Beat Brush Mountain activity includes a maze in which youngsters must create their own trail to travel off the mountain.

The number and frequency of programs may also depend on the park’s visitor numbers. For instance, since Great Smoky Mountains is the most-visited park unit in the entire National Park Service system, it’s no surprise that more than 24,000 children took part in Junior Ranger programs there last year. By contrast, Stones River is a smaller park but still had 1,350 kids inducted as Junior Rangers in 2013. 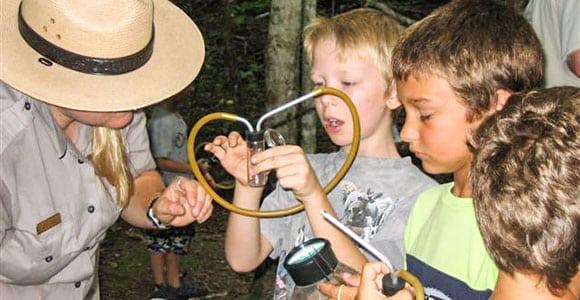 If a child wants to become a National Park Junior Ranger but can’t visit a park in person, online opportunities are available. Great Smoky Mountains National Park offers an electronic field trip to the park, online games and activities and videos on topics such as the Junior Ranger blacksmith program at the Mountain Farm Museum. WebRangers, the National Park Service’s website for kids, allows visitors to solve puzzles and mysteries, play games and earn rewards, all while learning not only about parks in Tennessee but also ones throughout the United States and its territories.