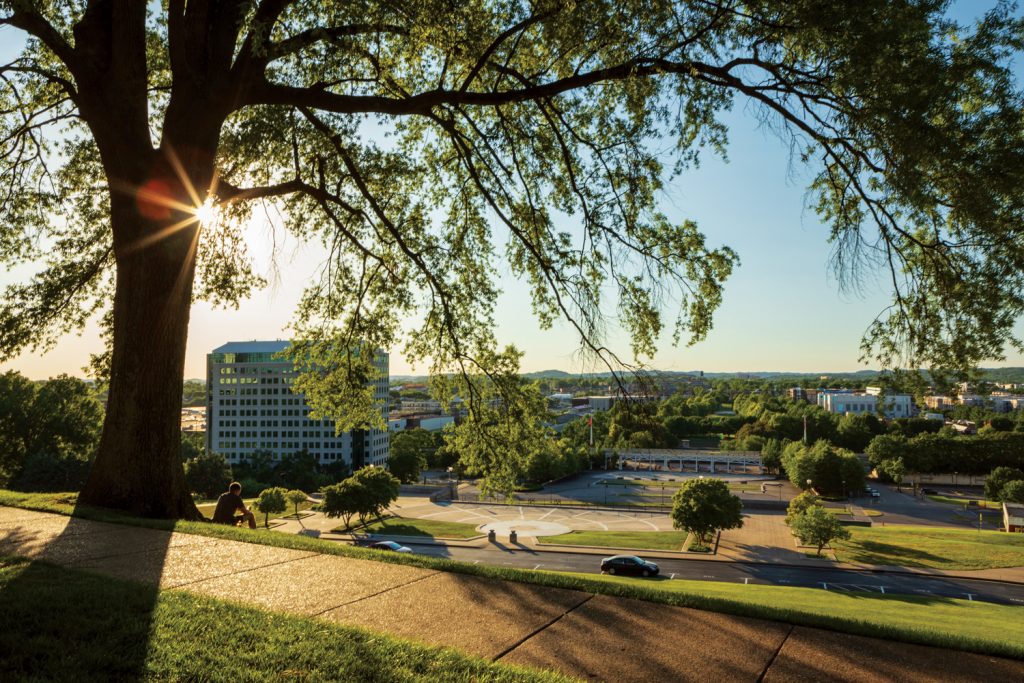 Following an uncertain spring characterized by “safer at home” advisories, travel restrictions are easing, and Tennessee is opening to welcome visitors ready to get out of the house. Perhaps you’re forced to stay closer to home instead of traveling farther away for a summer vacation. The state parks system stretches across Tennessee, so outdoor recreation and education are easy to find no matter where you live.

You could start your exploration of our parks at the symbolic center of Tennessee: Bicentennial Capitol Mall State Park, located in the literal shadows of the State Capitol in Nashville.

“The Bicentennial Mall is an extension of the State Capitol grounds,” says Park Manager Jerry Wooten. “I guess you could say we’re ground zero for the state parks system because all the Department of Transportation milage is measured from a marker right here at the foot of the park. The zero mile marker for the state of Tennessee is right here, and having that in the park is sort of a natural start for people who want to visit all 56 state parks.”

Dedicated on June 1, 1996 — Tennessee’s 200th birthday — Bicentennial Capitol Mall State Park is one of the smallest in the system at only 11 acres, but it’s the most-visited, welcoming more than a million visitors from around the world each year.

“Our theme here is Tennessee statehood,” Wooten says. “So Bicentennial Mall is a historical park, but it also incorporates elements that have to do with the natural and cultural history of the state.”

Among the main attractions are Tennessee’s official World War II monument and the Court of Three Stars where 50 columns house a 95-bell carillon that chimes or plays Tennessee-themed songs — standards like “Rocky Top,” “Walkin’ After Midnight” and “Wabash Cannonball” — throughout the day. The Pathway of History is a wall stretching the length of the park and chronicles Tennessee’s historical highlights from 1796 until 1996. There’s also an amphitheater in the middle of the park that hosts performances and other events, and the Tennessee Fountains out front represent the 31 significant waterways of Tennessee. (Popular for summertime cool-downs, the fountains have, sadly, been shut off in complying with coronavirus prevention measures.)

“Both sides of Bicentennial Mall are lined with tulip poplars, the official state tree, and every shrub or tree in this park is native to Tennessee,” says Wooten, explaining the natural history aspects of the park and adding that berms on one side mimic the geographic features of the state. “So you start at the foot of the park in ‘West Tennessee.’ Then you enter ‘Middle Tennessee’ where the berms begin to rise a little higher. And as you get to the very end of the park in ‘East Tennessee,’ the berms are the highest.

“The berms feature foliage and trees that are found in each of the three Grand Divisions. There are hemlocks and rhododendron on those far berms for East Tennessee. Middle Tennessee has poplar and redbud trees. And in the West Tennessee section, you have cypress trees and swamp oaks. So all the vegetation and foliage is positioned to signify each section of the state.”

Unfortunately, some of the trees were damaged by the March 3 tornado that tore through Nashville. But cleanup has long since been completed, and replacement native trees are being procured for the park.

Rangers design free programs like walking tours as well as more in-depth, fee-based programs. The third weekend of October is the Tennessee Timeline event, where the Pathway of History comes alive with interpreters representing figures from state history. And there’s usually a Statehood Day commemoration on June 1, but the 2020 event had to be cancelled. Rangers have recorded presentations and posted them to the park Facebook page, facebook.com/BicentennialCapitolMallStatePark/, where you can also stay up to date on programs and events.

One of the most striking features of Bicentennial Capitol Mall State Park is a huge map of Tennessee and its 95 counties on the ground at the front of the park. When the map was installed, each county seat was identified with a light, but over the years, the electrical system was compromised. The lights no longer worked and were replaced with metal disks. The park maintenance staff identified a solution, replacing the disks with solar-powered LED lights typically installed in roadways. The durable fixtures require no electricity from the grid, and the state map is once again illuminated once the sun goes down. 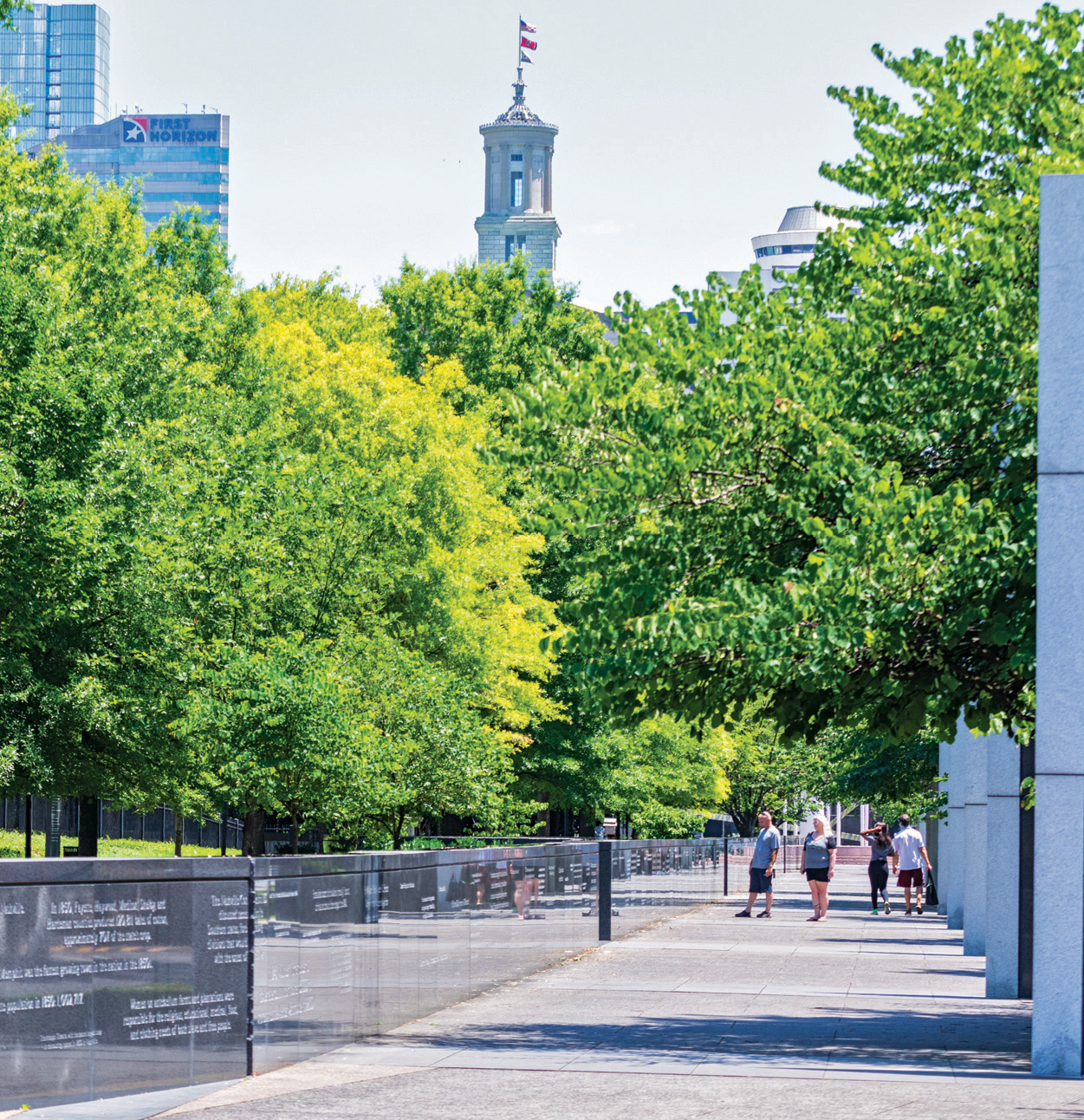 “It is amazing,” Wooten says. “Visitors need to go to the top of the grand staircase toward the Capitol and look down. It is just spectacular.”

For its durable, energy-efficient solution, Bicentennial Capitol Mall was awarded the 2019 Excellence in Innovation Award for Tennessee State Parks.

“We’ve brought the lights back to the state map,” Wooten says. “It’s one of the biggest attractions in the park.

Next year is the 25th anniversary of the showpiece state park’s opening. Wooten says he hopes there can be a celebration of the milestone, but as with many things in today’s world of coronavirus precautions, he’s not sure how that event might look. But formal celebration or not, the park remains a showcase of the 16th state to join the Union.

“The Bicentennial Mall is a memorial to the people of Tennessee,” Wooten says. “The design was to have cultural institutions bordering the park just like the National Mall in Washington, D.C., so once the Tennessee State Library and Archives opens across from the Tennessee State Museum, those two institutions will be part of this entire campus with the park as the centerpiece.”