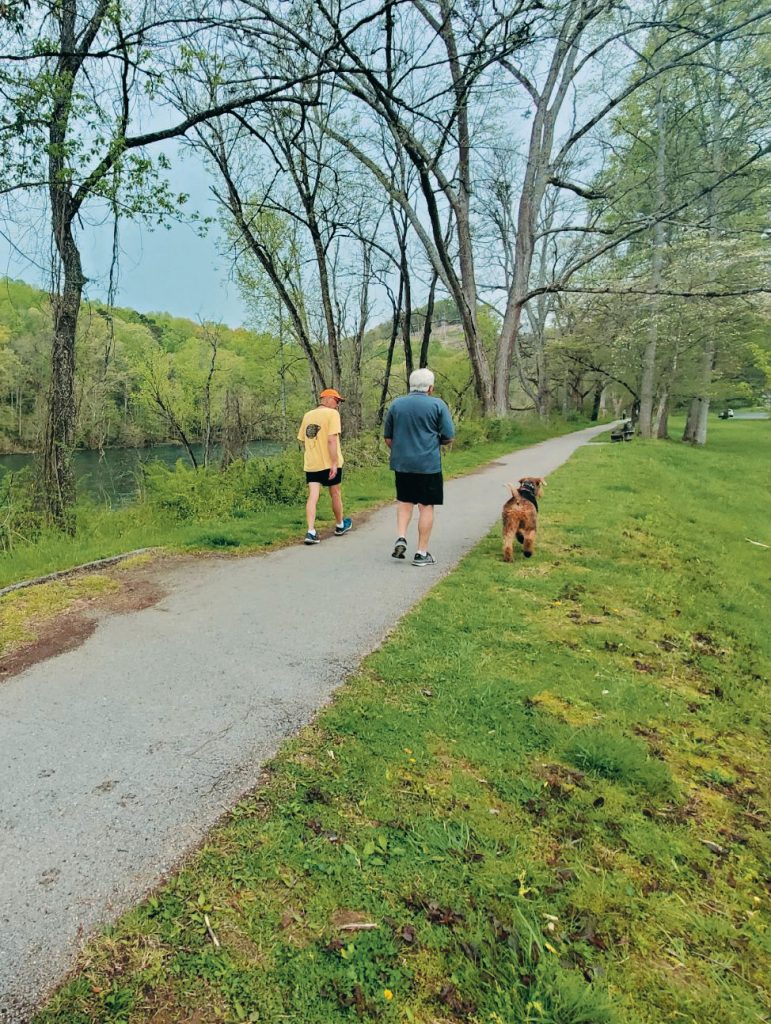 From left, Ken Huff and Steve West stroll with Jake along Norris Dam State Park’s Songbird Trail, which is popular with walkers and four-legged friends. The first half-mile of the 2-mile loop is a paved, wheelchair-accessible route that meanders beside the Clinch River and provides plenty of opportunities to spot some of the birds for which the trail was named. Several points along the way offer access for rafting, canoeing or fishing.
Features

From learning to leisure, Norris Dam State Park in Rocky Top has something for everyone, according to Park Manager Victoria Greear.

“We’re a family-friendly park with high-quality interpretive programs,” she says.

Whether it’s hiking, camping, enjoying the abundant water recreation opportunities or learning about the park’s rich New Deal-era history, Norris Dam State Park is a great destination for weekend recreation or a longer vacation. It sits on more than 4,000 acres and has more than 800 miles of shoreline, providing tons of space to enjoy the great outdoors.

“This is an iconic Depression-era park,” Greear says. “It was originally a TVA park in the early 1930s, and Civilian Conservation Corps labor was used to build the park.”

In fact, the park still rents out 19 historic cabins that were built by the CCC and are listed on the National Register of Historic Places. The CCC also built the Tea Room, which is used for various types of gatherings, including weddings.

You’ll definitely want to make time to explore all there is to see at the Lenoir Museum, which is filled with artifacts from Appalachian prehistory to pictures of what the area looked like prior to the impoundment of the Clinch River to create Norris Lake, the first major Tennessee Valley Authority project. The museum complex also includes the circa 1798 Rice Gristmill and the 1830s Caleb Crosby Threshing Barn, time capsules to bygone years.

In May, the museum will be hosting a new exhibit titled “Families of the Valley Remembered” that focuses on the families that lived in the area before being relocated for the building of the dam and lake. This exhibit will be composed of photos by renowned photographer Lewis Hine, who was hired by TVA to document the area and the families who called it home in the predam years. Hine, who was also a sociologist, was known for taking photos to encourage social reform. His photos of child laborers in the early 1900s were instrumental in the eventual abolishment of child labor in the U.S. via 1938’s Fair Labor Standards Act.

Part of the history of the park that visitors may not know is that it was an important part of the Manhattan Project, the research and development project undertaken during World War II to develop nuclear weapons. The park was actually closed for a period of time when engineers who were building the secret city were housed in the park’s cabins. Because of the large population of Oak Ridge that resulted from the Manhattan Project, the park was the most visited in the state in the 1950s.

Decades later, Norris Dam State Park proved to be a welcome outdoor respite and refuge for people during the pandemic, same as many other state parks across Tennessee. Greear says comparing February 2020 visitation to that of February 2021 shows a 70 percent increase.

And like at other parks, Greear and her staff have had to make some adjustments to ensure the safety of the influx of visitors as well as park employees. Some measures taken have been to limit attendance at events and following the CDC’s cleaning protocols in the cabins.

The park and its staff obviously care about those who come to visit and want to give them the safest, richest experience they can have. In fact, Norris Dam State Park was honored last year for its customer engagement by the Tennessee Department of Environment and Conservation during the 2020 Tennessee State Parks Awards of Excellence.

“One the most important aspects of what our state parks do is interact with visitors and those who simply want to know more about the parks, and Norris Dam State Park stands out,” TDEC Deputy Commissioner Jim Bryson said at the time of the awards.

Part of increasing engagement involves being in the spaces where people are spending their online time, something most people did more of throughout 2020. Thus, Norris Dam State Park launched an Instagram page to reach a new demographic audience and currently has more than 1,000 followers. During the early stages of COVID-19, the park began posting interpretive videos on Facebook as a way to engage and connect with park visitors, resulting in 51,400 views and a 25 percent increase in followers. The park also posts videos titled “Museum Minute with Mike” highlighting various historical artifacts found in the Lenoir Museum.

The park has seen growth in gift shop sales and in May 2020 opened The Canteen, a camp store converted from a camper check-in site. The park now has gift shops at the visitor center, historic Rice Gristmill and camp store. One of the top-selling items has been honey harvested from the park, a venture that came about as a result of the park partnering with a local beekeeper to launch the Honey Project.

Norris Dam State Park has also worked with local communities on new partnerships, including coordinating with local master gardeners for the installation, design and maintenance of native landscape beds in the historic district. 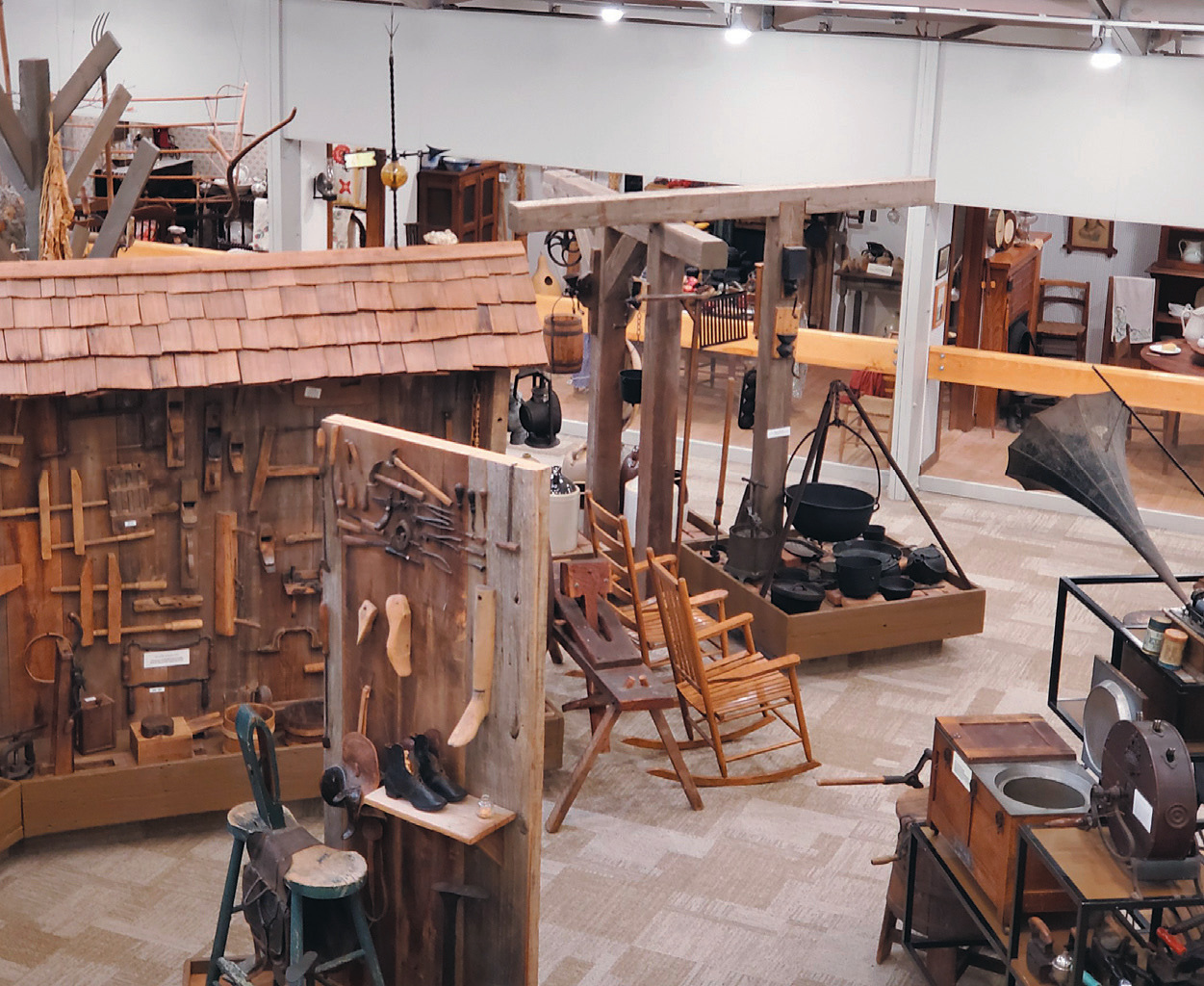 A popular way of engaging with the public that capitalized on everyone’s need to safely get outdoors during the pandemic was the 84-mile challenge, a health initiative that encouraged people to hike, bike, horseback ride or paddle 84 miles over the course of the year to celebrate the 84th anniversary of the building of Norris Dam. The miles could be logged from activities undertaken within the state park, in the Norris Watershed or on TVA’s trails and waterways. The park alone has 15 hiking trails and 11 miles of mountain biking trails, and Norris Lake covers nearly 34,000 acres.

The challenge was so popular that it’s back again this year as the 85-mile challenge, and Greear says one of the changes is the implementation of a volunteer program for those who may have physical restrictions that prevent them from the activities included in the challenge.

“For every two hours they volunteer at the park, they earn two miles in the challenge,” Greear says.

This program fits in nicely with Tennessee State Parks’ Healthy Parks Healthy Person TN initiative, the purpose of which is to help improve Tennesseans’ physical and mental health by getting them outdoors and enjoying Mother Nature. There are abundant opportunities to do exactly that at Norris Dam State Park, whether you enjoy hiking, biking, fishing, swimming, boating, camping, horseback riding, photography, picnicking, birding or just lying out in the sun, enjoying a good book.

“It’s an amazing park,” says Greear, who spent 17 years working at various state and national parks before becoming Norris Dam’s park manager two years ago. “It’s so rich in history, and I enjoy being the driver of the boat in making that history come alive for visitors. I want to leave the park better than I found it.”

For more information, visit the park’s website at tnstateparks.com/parks/norris-dam or call 865-425-4500.