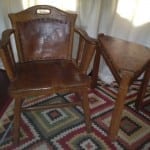 My father-in-law was stationed at the Pyote, Texas, Air Force Base during World War II. He acquired this chair and table while stationed there. He has passed away, and the family is trying to determine its maker and origin.

It appears to be handmade and has a leather insert with a longhorn steer on the inside back of the chair. The triangle table has a leather top with no design in the leather. Any info you may know would be very much appreciated.

Ranch or Southwestern motif furniture was popular in the mid-1900s. Around 1940, this chair with an embossed leather longhorn steer and the triangular side table were made by A. Brandt Company in Fort Worth, Texas. It’s called Ranch Oak and was especially revered by little boys who may have watched cowboy movies and television shows. The two pieces might bring $500. 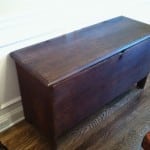 What can you tell me about it?

The hardware and construction of your inherited six-board chest indicate that it’s older, maybe made before 1850. The pattern of the side panels is described as a bootjack cut. The fitted interior cubbies and candlebox are called a till. The hardware appears to be hand-forged. It’s a jewel of a chest.

The art and archives of your great-grandmother, Alice Ware Armstrong (1876-1952), now reside at Gallaudet University in Washington, D.C. I’m glad you have the chest. If it were sold at auction, the piece might bring between $850 and $1,500 with your artist-matriarch’s attribution. 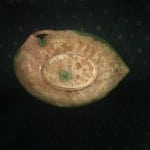 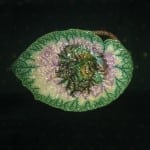 Your treasured heirloom pottery is described as a leaf form majolica plate. Majolica pottery was first made in Italy many centuries ago. The muted, colorful, naturalistic-patterned pottery was produced by manufacturers and craftspeople in great quantities during Victorian times — mid- to late 1800s. Larger pottery companies marked their wares. But just as many were made without a mark or simply a slash of color as the only signature.
The shape of your pretty plate is sometimes described as a begonia leaf. It could sell for as little as $35 if damaged. A perfect piece might bring as much as $185.

Because majolica was fired at a relatively low temperature, the glaze is often crackled. Buyers will tolerate or even enjoy a crackled finish, but visible chips or larger cracks will diminish value considerably. I advise against the use of metal plate hangers.