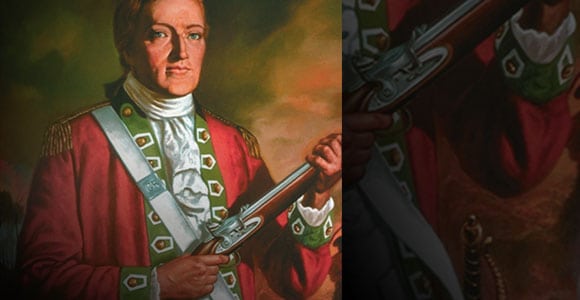 It was the most famous road trip and the most important victory in Tennessee history. During the American Revolution, a British commander named Patrick Ferguson led an army through South Carolina. Along the way, he sent a threatening message to the Scotch-Irish settlers in present-day northeast Tennessee.

This message angered the settlers. About 480 of them left their homes, crossed the mountains and joined other groups of settlers from Virginia and the Carolinas. This ragtag army destroyed Ferguson’s at Kings Mountain in what some consider the turning point of the American Revolution.

Here are the events that led to this battle:

War between Britain and its American colonies started in 1775 and dragged on much longer than Britain thought it would. Although armies consisting of redcoats (British soldiers) and Tories (American colonists loyal to Britain) won many battles in and around Boston, New York and Philadelphia, the British could not make the American army surrender.

In 1778, the British started a new campaign referred to as the “Southern strategy.” The idea was to invade Georgia and move north from there. The British believed that more colonials were loyal in the South, which would help the invasion succeed.

From the British point of view, the Southern strategy got off to a great start with the takeover of Savannah, Ga., in 1778 and Charleston, S.C., in 1780. By the summer of that year, British forces moved in three parts north through South Carolina, led by Lord Charles Cornwallis, Lt. Col. Banastre Tarleton and Maj. Patrick Ferguson.

Ferguson’s army was the westernmost of these three forces, and there is something interesting that many people don’t realize: Ferguson did not have a single soldier from Great Britain! He started out with four regiments of Tory soldiers from New York, New Jersey and Connecticut. Along the way he recruited other men from the South Carolina countryside.

As Ferguson’s army moved northwest, he heard about the many Scotch-Irish immigrants who had crossed the mountains into Tennessee in defiance of King George III’s Proclamation of 1763. In September, he issued a written warning to the frontiersmen to lay down their arms or he would “lay waste to their country with fire and sword.”

Isaac Shelby, a leader in what is now Sullivan County, received this warning and rode to meet with John Sevier, who was in Jonesborough at the time. Shelby and Sevier decided to raise an army that would link up with other rebellious forces and fight Ferguson before he moved west.

On Sept. 25, these men gathered at the Sycamore Shoals of the Watauga River (present-day Elizabethton). There were 240 from Washington County, 240 from Sullivan County and 400 from Virginia. Most of these men had no military training. None of them had uniforms. Some didn’t even have shoes!

But they were skilled with rifles. Many had previous experience fighting against Native Americans. And they were furious at Ferguson for issuing such a threat.

These men said goodbye to their wives, their sons and their daughters, not knowing if they would ever see them again.

The Overmountain Men marched, walked and rode 330 miles in two weeks. On Oct. 7, they tracked down Ferguson’s army on one of the few hills in the northwest part of South Carolina.

Why Ferguson chose this hill, known by the locals as Kings Mountain, is a mystery to this day. Since Ferguson was from Scotland, which is mountainous, some historians think he simply felt comfortable on top of hills.

The colonial forces split into groups and surrounded the mountain. Ferguson’s men lined up and prepared to defend themselves.

The battle that followed was neither long nor complicated.

The patriot forces yelled at the top of their lungs and charged up the hill. They fired, ducked behind nearby rocks or trees to reload and fired again. They used tactics they had learned from fighting Native Americans on the frontier.

There are many first-person accounts of the battle in a book called “The Battle of Kings Mountain: Eyewitness Accounts” by Robert M. Dunkerly. One soldier, Leonard Hice, was shot five times — twice in the left arm, once in his left leg, once in his right knee and once in the chest. He kept firing, resting his rifle against a tree, after the first two bullets hit his arm. “Whether my bullet brought the enemy down or not, I cannot say, for many were as good marksmen as I,” he later wrote.

Today, we believe that the men shooting from the bottom of the hill were more likely to hit their targets than the men shooting down at them — in part because of the rocks and trees they could hide behind.

About the time Colonial soldiers made their way to the top of the hill, they killed Ferguson. (A later examination of the body revealed that the British commander had been shot seven times.) At that point, the battle became a slaughter.

In the Battle of Kings Mountain, 244 members of Ferguson’s army were killed, 163 wounded and 688 taken prisoner. Only 29 members of the patriot militia were killed and 58 wounded.

Coming at the time it did — after British victories at Charleston and Camden — Kings Mountain was a huge boost for the American side. However, the victorious army didn’t stay in the field for long. Worried that Cornwallis might be nearby with a much larger force and concerned they were needed at home to fight Native Americans, the Overmountain Men retreated back from where they came. Cornwallis later tried to resume his military offensive in the South. But only a year later, he surrendered to Gen. George Washington at Yorktown, ending the American Revolution.

One final story about Kings Mountain: After the battle, Sevier chose a Washington County soldier named Joseph Greer to deliver the message about the battle to the American Congress. Greer, who was said to have been 6 feet 6 inches tall, made the journey by himself, avoiding hostile Native Americans and British soldiers the whole way.

When Greer got to Congress, the doorkeeper tried to bar his entrance. The veteran of Kings Mountain pushed him aside and delivered the message to the representatives there, who were thrilled with the news.

“With soldiers like that,” Washington said, “no wonder the frontiersmen won.”

Joseph Greer later moved to Lincoln County, where he lived until 1831. He was buried near the town of Petersburg.

James Dulley writes weekly newspaper columns and monthly magazine articles for more than 400 publications. All of the columns are included on his web site at dulley.com. He is a graduate of the University of Cincinnati and Harvard University.