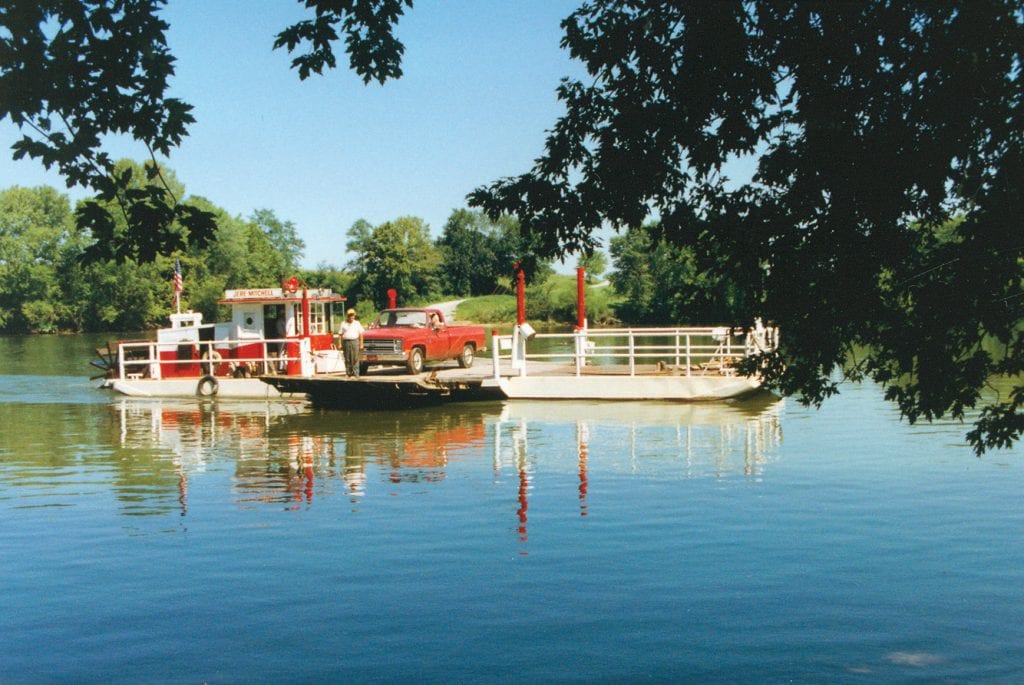 When our December issue arrived, I was excited to see the article about Tennessee ferries. After reading it, I was disappointed when I didn’t find a mention of the Huffaker Ferry on the French Broad River near Knoxville. The road is still named Huffaker Ferry Road. Here is a brief excerpt from Visitknoxville.com:

“ABOUT: Known today as Cruze Landing after Cruze Farm donated property, the Huffaker Ferry is notable for several reasons other than the fact that it hosted, as we might expect, a ferry across the French Broad. The ferry was operated by the Huffaker family, who lived on both sides of the river here for generations.

“Huffaker’s Ferry was a shooting locale for the 1963 film ‘All the Way Home,’ the James Agee-inspired family drama starring Robert Preston. In the film, the ferry, which was still operating, was used to represent a ferry over the Powell River, north of Knoxville. It sank during the shooting and, since the days of the ferry were already waning, was not recovered or rebuilt.”

I enjoyed Bill Carey’s history lesson in your magazine. But one ferry was not mentioned in the article. It is Cleeces Ferry in west Nashville. The ferry boat was The Judge Hickman; the namesake is also part of Nashville’s history. Just another piece of Tennessee’s rich history. I was told the ferry was taken out of service when Briley Parkway bridged the Cumberland River close by.

I was reading the latest issue of The Tennessee Magazine, in particular the History Lesson by Bill Carey. There’s an operating ferry in Sharps Chapel that crosses Powell River. A friend and I rode it last year, and it’s operated by the Union County Highway Department. It doesn’t cost to ride. Here’s a link to the website: tennesseerivervalleygeotourism.org/content/helmsferry/tenC292901B692 E87554

I enjoy your magazine.

I am writing in regards to the article on ferries in Tennessee. Very interesting article by the way. In the end, it stated that only two ferries are still in operation today. However, you did not mention Helms Ferry in Union County, which crosses the Powell River arm of Norris Lake.

Regarding your article on Tennessee ferries, it mentions that there are two remaining ferries in the state. The article failed to include the Helms Ferry, which operates in Sharps Chapel, Union County, on the Powell River.

Editor’s response:
The only two remaining ferries operated by the Tennessee Department of Transportation are in Stewart County (at Cumberland City) and Houston/Benton counties. However, our readers have responded with information that there is at least one more that crosses Powell River/Norris Lake near the Sharps Chapel community and operated by Union County. Thanks to readers Tony Headrick, Gary Sharp, Jim Divoky and Mike Flavin for bringing this to our attention!

I would like information on subscribing. I saw your magazine in a doctor’s office and found it interesting.
— Linda Kiker, Afton

Can you receive this magazine through the mail?
— Kathy

Editor’s response:
Absolutely! The Tennessee Magazine is available to members of Tennessee’s electric cooperatives as part of the membership fee. If you are a member, check with your local office about a subscription. If you are not a member of an electric cooperative, you can purchase individual or gift subscriptions. The cost is $15 for one year or $30 for three years. Please see the form on page 41 or check our website and choose a subscription at tnmagazine.org/shop.