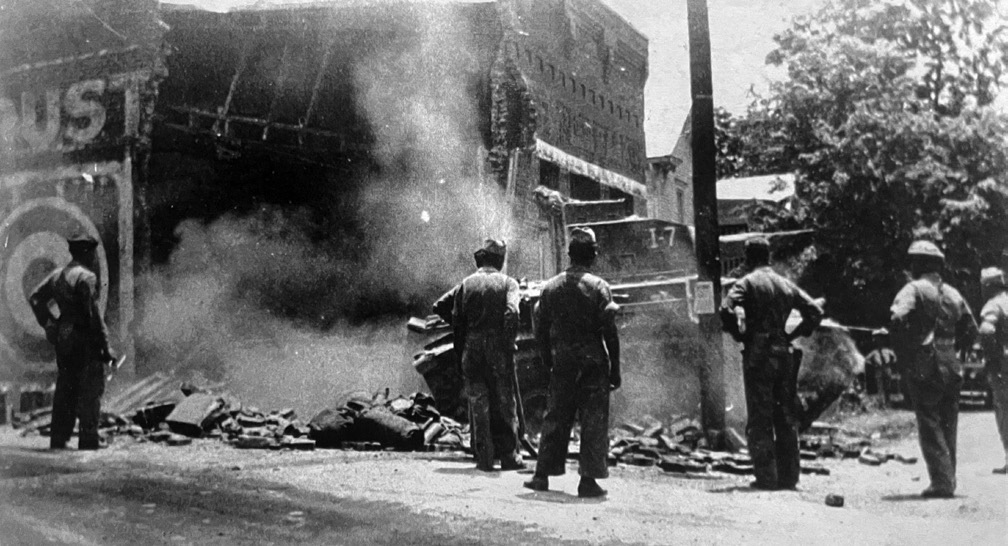 I read with much interest your article, “Tennessee in Training” in The Tennessee Magazine in May. However, your recounting of the Bell Buckle incident is not fully correct. The building that was destroyed was a bank on the corner of Hinkle Hill Road and Webb Road/Highway 82. This was not the Bell Buckle Town Hall.

I have two photocopies to send you, if you’d be interested, depicting the damaged bank building with the tank and with servicemen looking on. The other image is of our home, which was, then, next door to the bank. You can see the second story of our home next to the half-demolished bank in the first image. This image was taken by Mrs. Louise Rucker, a local widow who made and sold sandwiches to the soldiers.

At the time the accident occurred, our home was A. M. Hoover’s Funeral Home. This structure had originally been a hotel. The Bell Buckle depot was across Hinkle Hill Road from it. The depot is no longer standing. Mr. Hoover purchased the land on which the bank stood, and it is now our side yard.

I don’t know if Bell Buckle had a town hall until my husband, Gene Strobel, became mayor in the late 1970s. Previously, the mayor and board of aldermen met in a trailer on the town school property. Mayor Strobel convinced the board that Bell Buckle needed a town hall. He applied for a grant from the Tennessee Historical Commission and received one to renovate a building downtown that had fallen in when the train passed through town one day! So, the Bell Buckle Town Hall is now on the front street of Bell Buckle. There is a plaque there honoring my husband who died in 2016. I have a digital image of the “before” and “after” town hall renovations if you’d like to see that as well.

If interested, give me an address to which I can send the photocopies. Sorry, but I can’t scan them or I would do so.

We always look forward to your articles in The Tennessee Magazine; they’re great!

Katherine: I’m going to suggest that we run your letter in its entirety… but here’s what’s funny:

The information that the building destroyed was Bell Buckle’s city hall came from two different sources: One is a master’s thesis done on this subject, which you can see here: dc.etsu.edu/cgi/viewcontent.cgi?article=3673&context=etd

(You will find the mention of Bell Buckle’s City Hall twice, including on page 1.)

The second source is the only book on this subject, “In the Presence of Soldiers” by Woody McMillan.

In any case, it sounds to me like you are right, and I am wrong. It is very strange that the story could have gotten so messed up twice before! My guess is that Woody got it wrong, and the master’s thesis guy ran with it without checking it.

Thanks for correcting me. I’d rather we get it corrected now than let it ride because if we let it ride, then it really will be believed as fact for all eternity!
— Bill Carey, Tennessee History for Kids

I just received my June 2022 edition and wanted to say how much I enjoyed reading about fair history in Tennessee. Being a farm kid, 4-H has always been a part of my childhood. Although I lived in Michigan at the time, I love going to fairs and seeing the animal exhibits now as a grandparent. Fairs are a great way to expose children of all ages and walks of life to the different things that can come from a farm.

Another article that I enjoyed reading was about Opryland. Every summer we would travel to Nashville from Michigan to stay at the KOA campground and go to Opryland and the Grand Ole Opry. My parents couldn’t afford much so we always spent one full day at the park, and then that night my brother and I would fall asleep in the balcony seats for the late show.

What great memories! Thank you for allowing lowing me to reminisce.
— Melissa Cole, Cumberland EMC

Is it possible to get a hard copy of the magazine mailed to me? If so, what steps are necessary to take?

The Tennessee Magazine is distributed through Tennessee’s electric cooperatives. The publication schedule varies by co-op as to whether members receive it monthly, bimonthly or quarterly.