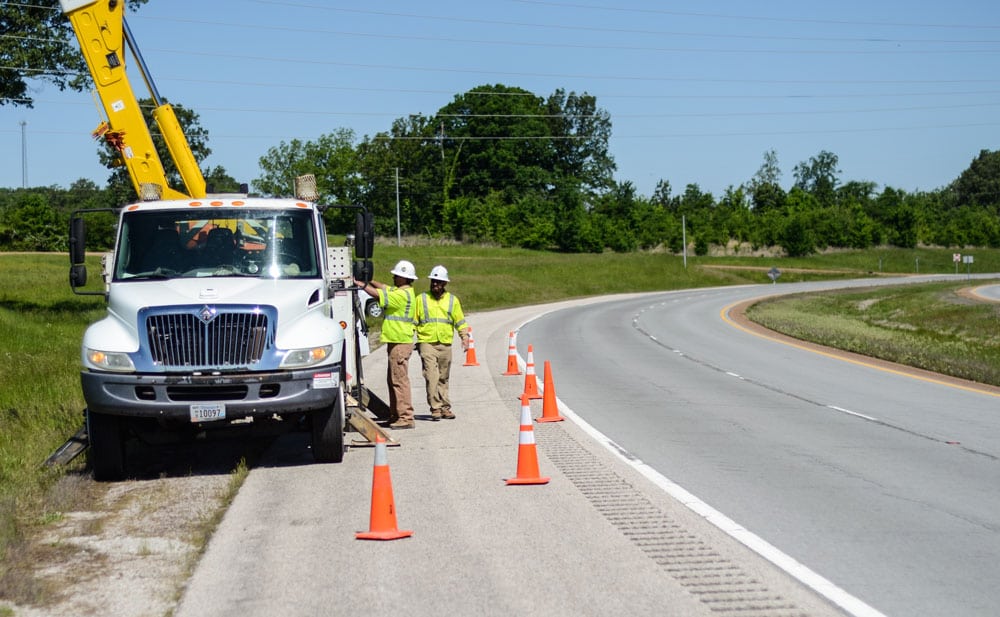 Electric linemen have dangerous jobs. They work inches away from deadly high voltage in all types of weather — often high above the ground. They take extensive precautions to keep safe, but one of the most dangerous parts of their job is completely out of their hands.

“A lot of the hazards we face are in the air, but we take precautions and have learned to protect ourselves from that,” says Eugene Stephens, line crewleader with Gibson Electric Membership Corporation in Trenton. “On the ground, the hazards are vehicles. We can put signs and cones out, but that is the most dangerous part of working on the side of the road.”

In 2011, following efforts by Tennessee’s electric cooperatives and municipal utilities, the state’s Move Over law was revised to include utility workers as well as the already covered police, firefighters and other first responders. Unfortunately, motorists do not always heed the law.

“Four years ago we had a vehicle, at 9:30 in the morning, come through our work zone and crash right behind the bucket truck,” says Stephens. “It almost hit two of us. It is something we are very aware of when we set up on the side of the road.”

“We have had cars come through at high rates of speed, hitting the cones we have set up and clipping the outriggers that we have put down to support the trucks,” says Greg Bryant, a line foreman with Gibson EMC. “I think people care; they just don’t pay attention like they should.”

“There are a lot of people looking at their phones nowadays — not paying attention to the road,” adds Gibson EMC lineman P.J. Haskins. “It’s pretty dangerous.”

The requirements of the Move Over law are simple. On a four-lane road, if safety and traffic conditions allow, a driver approaching a utility vehicle with flashing lights must move into the far lane. On a two-lane road or when changing lanes is not possible, a driver must reduce speed.

In addition to electric co-op trucks and equipment, service vehicles used by municipal electric systems, telephone companies and utility districts are also protected by the law.­­

“July marks the fifth anniversary of the expansion of the law, but there is still a general lack of awareness,” says David Callis, CEO of the Tennessee Electric Cooperative Association. “Tennessee’s electric linemen perform an important job in a dangerous environment. Changing lanes or slowing down to give them a little space is a simple courtesy that could save someone’s life.”

Visit moveovertennessee.org to learn more about the expanded Move Over law in Tennessee.

Trent Scott serves as vice president of corporate strategy for the Tennessee Electric Cooperative Association. In this role, he coordinates the corporate communication efforts of TECA and The Tennessee Magazine and provides assistance to member utilities. Trent holds an undergraduate degree in marketing from Freed-Hardeman University and a Master of Business Administration from the University of Tennessee. Trent and his wife, Suzanne, have two children and live in Henderson.