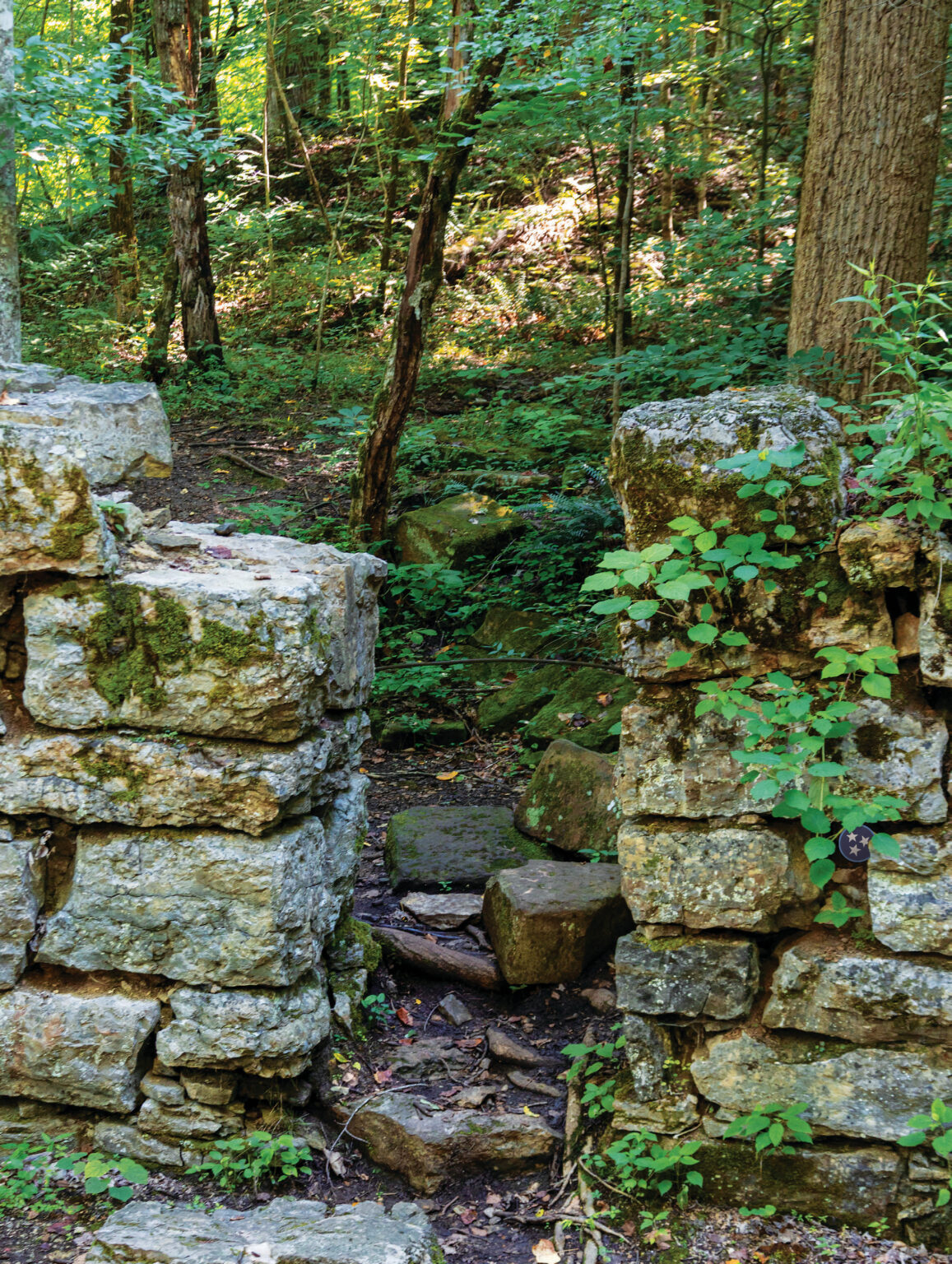 The remnants of the Main Mill stand as testament to the site’s industrial significance.
Features

There are places where the connection between manmade structures and the natural world can be felt at a deep level, places where ancient humans attuned to the rhythms of Mother Earth and incorporated those rhythms into structures they built with their hands.

One such place is Old Stone Fort State Archaeological Park near Manchester.

The irony is that Old Stone Fort isn’t a fort at all. Rather, it was a ceremonial gathering spot during the Middle Woodland Period. Scholars have gathered that the Native People were aware of exact days the seasons changed because the original entrance to the “fort” faced the precise spot on the horizon where the sun rose on the summer solstice.

Much of the site’s history is shrouded in mystery since it was abandoned long before European settlers arrived. Theories about its past as well as the people who used the site are among the topics explored in the park’s museum. Excavations at the site of the stone-and-earthwork fort have helped piece together part of the story, and the items found during these excavations are also on display in the museum. From 1966 to 1971, a firmer picture of the fort’s builders and users emerged thanks to radiocarbon dating, excavations and the discovery of five Middle Woodland settlements within 20 miles of Old Stone Fort.

Despite the misnomer, the excavation team determined that it was not a defensive structure based on several facts: It was built gradually over centuries, the walls aren’t high enough and the site didn’t yield the type of cultural artifacts that are found in areas that are inhabited.

After White hunters and settlers began to come into the area of the fort, it was an important landmark. And it’s believed that the fort was a campsite for the Nickajack Expedition, a group of American frontiersmen under the command of Maj. James Ore who were engaged in a battle with the Chickamauga Cherokee over the course of late summer and fall 1794.

As time moved into the first half of the 19th century, the fort’s location near the confluence of the Duck and Little Duck rivers made its surroundings popular for water-powered mills and then later factories that made rope and powder. In fact, you can still see the stone foundations of the long-gone Stone Fort Paper Company.

The site is so historically significant that it’s been listed on the National Register of Historic Places for nearly 50 years.

Old Stone Fort’s more recent history dates back to 1966 when the state purchased 400 acres of land that belonged to the Chumbley estate, a bit less than half of the total acreage that is now part of the park. Over the years since, the park has developed numerous offerings that state park visitors have come to enjoy.

While the park has a lot of historical significance, it’s also a natural beauty. Visitors can explore on any of the six trails that range in length (0.3 to 1.4 miles) and difficulty. You can also try your luck angling for largemouth bass, bream and catfish in the Duck River or two forks off the river. Birders and nature photographers will also find plenty to delight them at Old Stone Fort. The rangers also lead a variety of programs and hikes that highlight the various aspects of the park from the fort itself and the human history to the wildlife that call the park home.

Like other state parks, visitation has seen a big jump at Old Stone Fort since the beginning of the pandemic. Even as life began to return somewhat to normal, the people who have discovered that they like visiting state parks have helped keep the numbers climbing.

He adds, however, that he believes “that a vast majority of our visitors come here for the natural environment and don’t pay much attention to the cultural features that the park was established for and that we are charged to preserve. This site has been expertly recognized as ‘perhaps the most spectacularly sited Woodland Period site.’ The Native Peoples built their sacred ceremonial enclosure here because of the natural setting, so it is an attraction, for sure. However, the overuse of the site for the natural aspects is at a detriment to the cultural features, especially the 2,000-year-old mounds.”

Served by Duck River Electric Membership Corporation, the park’s campground has 50 sites that can accommodate RVs, pop-up campers and tents. Each site has water and electric hookups, picnic tables and grills, and there is a nice bit of separation between each wooded site to afford campers some privacy. Two restroom facilities, one with showers, and a dump station are also available.

For things you might need during a park stay — such as fishing or camping supplies, snacks and other necessities — visit the camp store. To grab that commemorative coffee mug, hat or T-shirt or books on a variety of relevant topics, the gift shop in the visitor center is where you want to go.

“Just please be mindful of the namesake of the park when visiting,” Wimberley says. “Take in and appreciate the history of the area, and help us preserve this wonderful ancient site.”