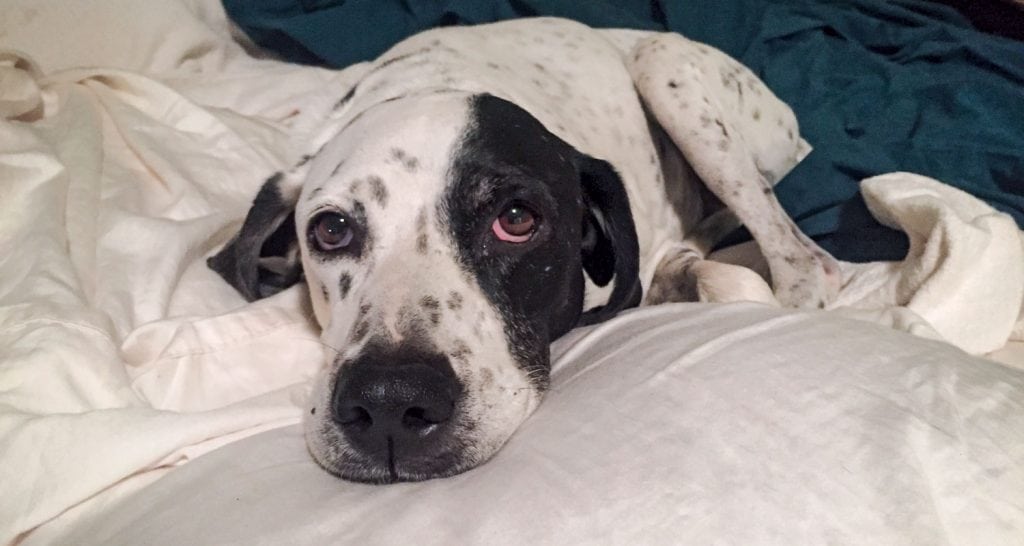 “Daisy,” photographed on an iPhone 6
and processed in Photoshop

Look at this face. I captured this image of Daisy with my iPhone just following her rescue after being lost in the woods for weeks. Her eyes and body language are the epitome of exhaustion and relief.

On July 10, my dogs Molly and Daisy and I were visiting my parents in West Tennessee. My nephew accidentally left a gate open, and Daisy, being a birddog, took advantage and ran for it. This would have resulted in about a two-hour run and return to my front porch had we been home in Middle Tennessee.

Best we could figure, Daisy had at least a two-hour head start once we realized she was missing. Searching until dark, we gathered back at my parents’ house to make a list of all we needed to do to find her — make signs to hang on mailboxes and post at businesses, get a big banner to place in the front field, get busy on social media and compile a list of area animal rescue organizations and shelters.

Daisy is 11 and has bad knees. I was hoping that might have slowed her down, but then this added to a nagging feeling she wouldn’t survive for too many days. As days passed, I kept fighting off the wavering feeling of giving up. I was afraid I had lost one of my best companions.

For the next three weeks, I juggled work days, vacation days and search days. The hunt included walking 43 miles through woods and on backroads, many tanks of gas, kayaking a section of the Obion to check the riverbanks and posting 400 signs. After 19 days, one phone call changed everything.

A very kind person in Milan called me and asked if I had a dog named Daisy. Because I had received several other calls that didn’t pan out, I tentatively said, “Yes.” My heart started racing when the lady said she’d just gotten my phone number off Daisy’s collar.

She explained that Daisy had been hanging out with the cows on her farm for a few days, and the lady had just gotten close enough to see the dog tags. Her farm, by the way, is about 10 miles from my parents’.

I can’t explain the feeling of relief when I drove up and saw Daisy was in the yard. She had lost about 15 pounds and had a few cuts and scrapes but survived with no major injuries.

While I never again want to experience another three weeks like this, I was able to find some good out of it all. I found out that even though neighbors in the country are spread out on farms, they keep an eye out for strange goings-on. I was stopped several times by folks wondering what I was up to since they didn’t recognize my car.

Once they learned what I was doing, they wished me luck and gave me permission to search their land. I reconnected with neighbors I hadn’t seen in years. They all became vested in the search and were so glad to hear the news when Daisy was found.

Some very dear friends, Kathy Hughey and Robbie Holmes, came out to help in the search. I really appreciated Mr. Sutton and Mr. Copous for their help and the Hamptons in Skullbone for spreading the news about a lost dog to everyone who came in their store. The Milan Mirror also helped out with an ad and social media posts, and Dr. Andy Lambert worked us into his busy Saturday to get Daisy cleaned up and vetted.

It took a community to hunt for her, but in the end, it was a $3 dog tag that got her back home.