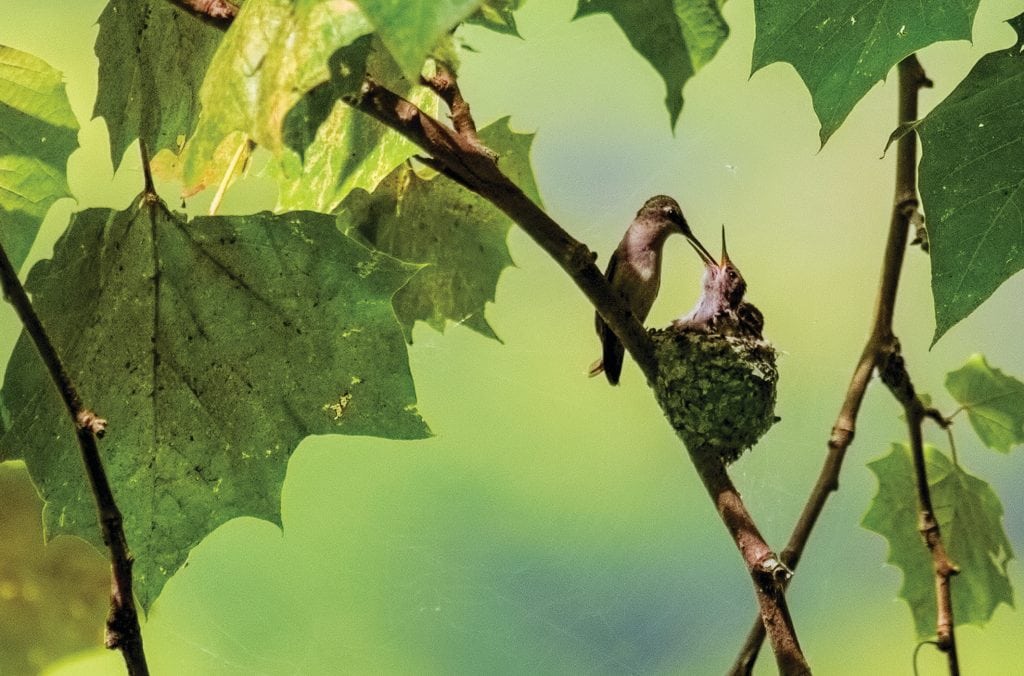 Until last summer, the only hummingbird nest I had ever seen in person was one I found lying on the ground, still attached to a small limb that had been ripped down during an afternoon thunderstorm. I was shocked that something apparently so small and delicate had survived intact when the limb it was attached to had been torn away.

With some research and observation of the tiny nest, I found that hummingbirds build their nests with tiny pieces of twigs, leaves and other plant fibers. They harvest spider silk and weave it throughout the nest to tie the pieces together and to anchor the nest to its foundation. The inside is less than 2 inches across and is lined with soft plant material. The outside is camouflaged with tiny pieces of lichens, making the nest almost impossible to see.

Ruby-throated hummingbirds normally lay two eggs. The spider silk ingeniously allows the nest to expand as the babies grow, which brings me to the second hummingbird nest I had ever seen.

Almost from its earliest stages, I was able to observe this nest at Nashville’s Radnor Lake State Natural Area. The nest hung out over the lake on a sycamore limb. My best vantage point was from the road about 20 feet away. I chose the longest lens I have, a 100–400 mm, to zoom in as tightly as possible. Because hummingbirds move so quickly, I chose a high shutter speed of 1/3200 of a second, which required a high ISO of 2500 to achieve the stop action on the adult as it came and went.

This nest was backlit in early-morning sunlight, so it had to be photographed mid- to late afternoon. Movement of the branches and leaves in the breeze continuously changed the lighting on the birds as it filtered between shade and sun on the nest. Timing was everything for this image. The sunlight hit the nest just as the female began to feed her brood.

If you plan to attract hummingbirds to your home this year, please don’t use store-bought nectars containing red dye. It does not necessarily attract more birds, and it can be toxic. A simple mixture of one part sugar and four parts water is cheaper and a more natural energy source for these delicate creatures.