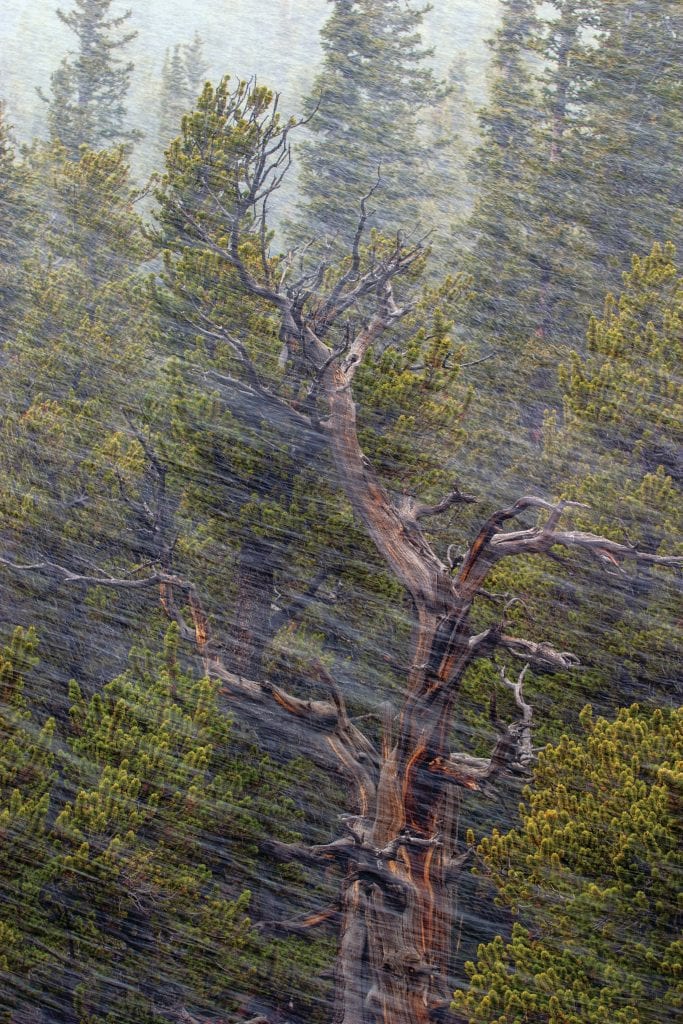 The weather can change its mind in minutes, often making or breaking the best-laid plans of photographers. On this particular day, I was on my way into Rocky Mountain National Park for the first time in 2005, hoping to catch a sunset or late-afternoon reflection on Sprague Lake. It was June in Colorado, and most of the snow had melted except for in the higher elevations. One minute it was partly cloudy, and the next a snowstorm rolled in from the north, bringing heavy, wet snowflakes, many as big as quarters.

Already fasciated with the trees along my drive, I stopped at a pullout to take in the panoramic view to the west. It was there that I spied this massive skeleton of a tree reaching through a thick stand of bristlecone pines to the east.

The snowflakes were falling so thickly at one point that the tree was almost obscured from view. Wanting to capture the feeling of the wind and streaking snowflakes, I set my camera on my tripod to allow for a slow shutter speed. I chose 1/20 of a second so that any movement in the needles or limbs of the surrounding trees wouldn’t be too noticeable.

The white streaks are the result of the snowflakes basically being recorded the whole time the shutter is open. Because they are lighter than the subject in the background, they appear as a layer of white streaks. It’s basically the same technique used to capture that silky look when photographing waterfalls.

For the rest of the story of this image, I was taken by the skeleton of the tree framed by new growth. I don’t know why this tree died — possibly a lightning strike, fire or some type of insect infestation. But, judging from its size, it lived for more than a century and likely lives on in the surrounding trees that may have sprouted from its seeds.

Nature’s cycle of life is delicate, persistent and ever-changing.