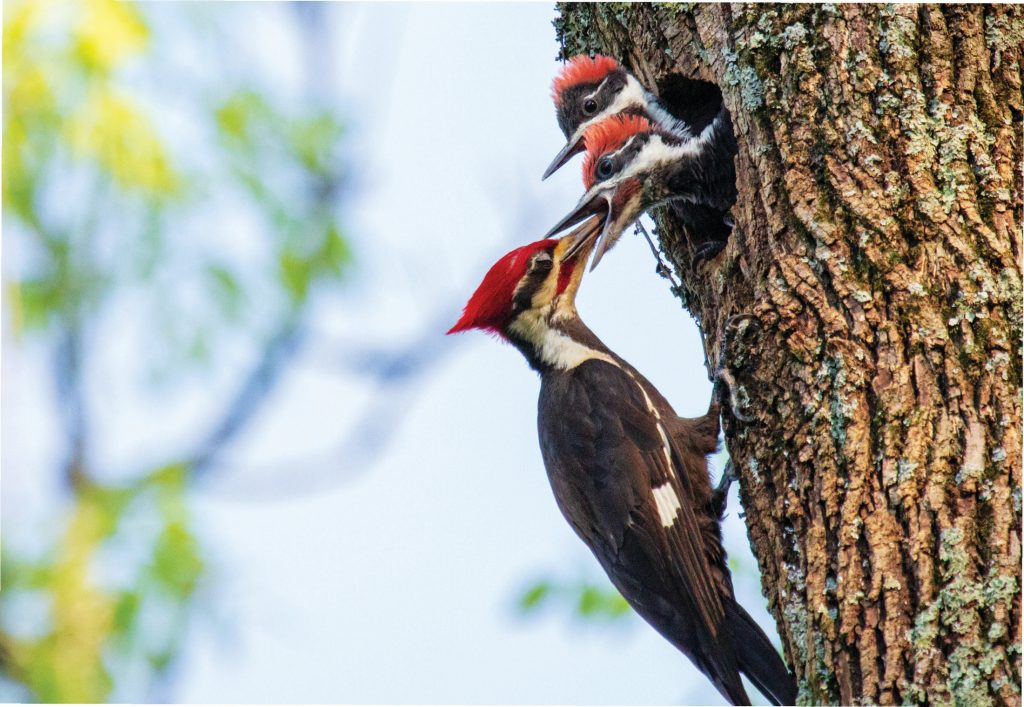 Have you ever heard a “rat-a-tat-tat, rat-a-tat-tat” echo through the woods and wondered what it could be? Chances are it’s a pileated woodpecker hammering away at a tree to reach grubs and other protein-rich insects inside. The woodpeckers are especially busy in the summer months while feeding their brood.

These are generally shy birds, but I happened upon one particular pair that found a cavity — which they excavated into a hollow — high in a tree that faced Nashville’s Rad-nor Lake. The nesting tree was right on Otter Creek Road, making it easily accessible for bird-watchers and photographers. This is only the second pileated nest I’ve ever been able to regularly observe as the young were raised.

Pileated pairs share in the feeding and raising of young. Males have a distinctive streak of red just below their lower beak, distinguishing them from the females.

With regular feedings every 30 and 45 minutes, there were plenty of chances to attempt to photograph the pair feeding their little ones. To say the moments were fleeting is an understatement.

After a few unsuccessful trips, I figured out that the late afternoon sun would cast the best light on the nest. Setting up my tripod about 40 feet away, I observed that when the little ones spotted a returning parent, they would spike their topknots, giving me about a two-second warning.

The combination of a long lens to get close to the action and a fast shutter speed to freeze the movement dictated a higher ISO than I would have preferred to use. Higher ISO settings can add “noise” to images.

The sun on the day I photographed the above scene was intermittent as I watched and waited. The clouds seemed to keep interfering every time an adult would return. After about two hours, the sun filtered through the clouds and trees just long enough to illuminate the nest as the male returned. Patience paid off not only to witness this moment but to capture it!