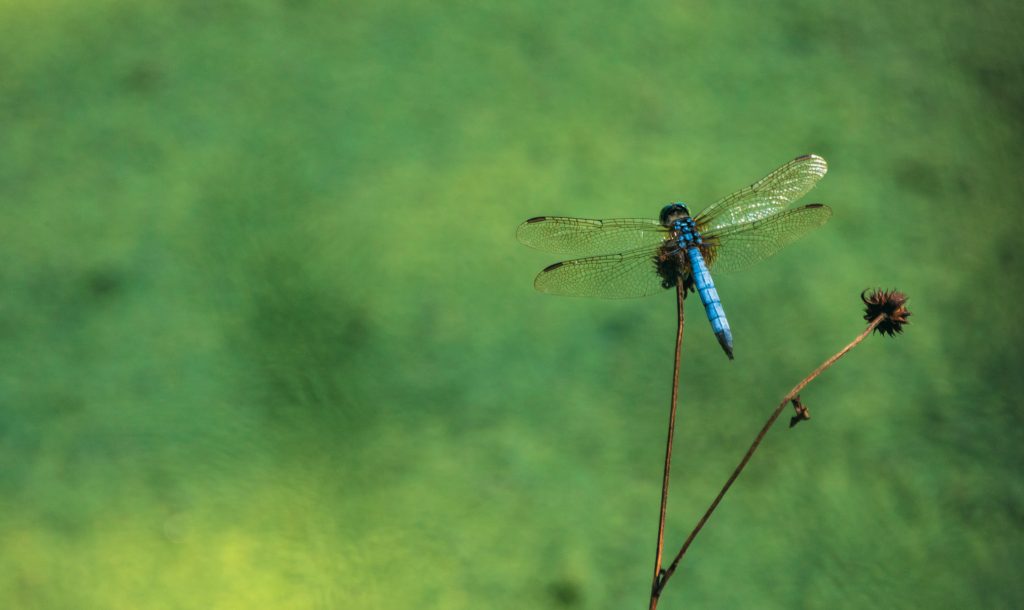 Observing this blue dasher dragonfly dart from place to place, I knew the chances of getting a sharp image of it would be a challenge. This common blue dragonfly against the green of the duckweed-covered pond caught my eye.

Standing about 15 feet away and above the area the dragonfly was hunting for insects, I noticed that it seemed to return frequently to one dead stem hanging over the water — a good vantage point for it to scan the surface of the pond and land in the clear. It became my focal point for the image.

I could see that the simplicity of the subject — if it would just land in the right place — and the uncluttered, singular color in the background could work nicely.

My camera setup on this particular day was for photographing birds with a 100–400 mm lens and a 2x extender. In photography, there are always tradeoffs. The 2x extender basically magnifies the power of the lens to which it’s attached. It made my 400 mm lens work like an 800 mm lens at a fraction of the cost of an actual 800 mm lens. But limitations come with the cheaper price.

Extenders increase how much light is needed to capture a correctly exposed image. This translates into the lens being “slower” than it would normally be, thus requiring longer shutter speeds.

My first decision for the exposure was that I needed a fast shutter speed. A general rule of thumb is to not shoot slower than the focal length of the lens. So I chose 1/800th of a second. For those of you not shooting with a manual setting, this would equate to a sports setting on your camera.

Next, I set the f-stop on 13, which was the smallest aperture I could choose. This translates into a narrow depth of field, which means the background would be blurred out, emphasizing the subject in sharp focus. Then I set the ISO — what used to be the film speed — to 1600, which is what my in-camera metering said was the correct exposure.

From my vantage point, I was shooting through some stray branches and twigs. Ordinarily, I would have wanted a less distracting view, but with the extreme magnification of the zoom and the fact that an unrestricted view was impossible, I decided to see what the effect would be of blurring the elements between the lens and the subject. Ideally, I would have wanted the green background to be smoother, but I believe the effect added a pleasing texture.

The dragonfly gave me three chances, returning to the twig for about three seconds each time. Third time was the charm!