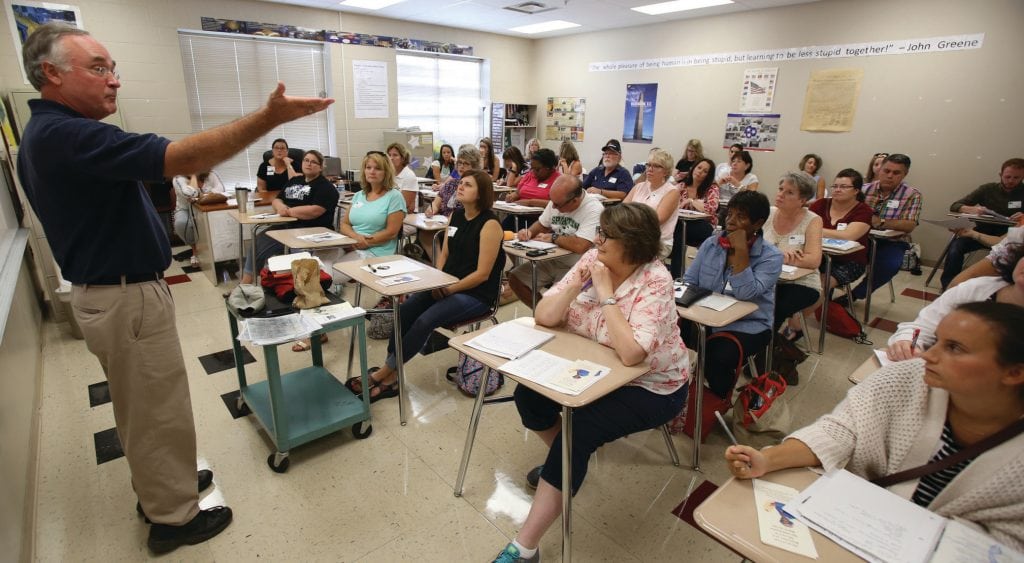 Nearly two years ago, I wrote a column concerning serious talk about deleting a lot of Tennessee history from the social studies standards.

At the time, I was afraid that the state would delete from the standards Tennessee-specific history topics such as the Donelson Party journey, the Lost State of Franklin, Civil War soldier Sam Watkins and the tent city movement of the 1950s. There was a proposal on the table to do just that, and I was worried about what would happen to our culture as a result.

Well, quite a bit happened in the months that followed.

To describe how this came about, I first need to explain the way Tennessee history has been taught in schools in recent years.

You see, prior to the year 2001, there were focused, semester-long Tennessee history courses in grades four and seven. At that time, these Tennessee history courses were replaced with a system under which our state’s history was “embedded” into the U.S. history curriculum. The way the system worked, students were supposed to learn about Tennessee history when they covered U.S. history in grades four, five, eight and 11. So, for instance, when students learned about the American Revolution in fourth and eighth grades, they were supposed to learn about migration into present-day East Tennessee at the same time. When students learned about the Civil War in the fifth and eighth grades, they were supposed to cover (and hopefully visit) Tennessee Civil War sites such as Fort Donelson and the Battle of Franklin.

I was a fan of this “embedding” because I think the best way for students to understand history is through local connections. However, not all teachers felt that way. I have to admit that in the last 15 years, many teachers told me that they didn’t like embedding and had a hard time doing it in their lessons.

Many parents, school board members and state legislators were also not fans of embedding Tennessee history. On at least two occasions, the late State Sen. Douglas Henry proposed bills that would have required Tennessee to go back to having a stand-alone course on its own history. Henry’s bills never passed. But he and I talked about this topic many times.

In the spring of 2017, State Rep. Art Swann (who has since been elected to the senate) and Sen. Ferrell Haile proposed a bill that required public schools to return to having a course in Tennessee history. They named their proposal after Sen. Henry. It passed unanimously in both chambers, although the matter received a lot of debate in House committee.

As a result of this new law, the social studies standards include a semester of stand-alone Tennessee history. Let me explain how this will work.

Officially, these new standards go into effect in school year 2019-2020. However, a recent announcement by the Department of Education that social studies standardized testing will not take place for grades three, four and five this school year has resulted in a situation where some school systems have moved ahead with the new standards already — at least for kindergarten through fifth grade.

News that the spring semester of fifth grade will become the “Tennessee history” semester has spread slowly. However, this will have a big impact on historic attractions such as the Carnton Plantation, Cumberland Homesteads, Shiloh National Military Park, Sycamore Shoals State Park and many others. Under embedding, historic attractions suffered in part because principals and school systems were never sure what grade should be taking field trips.

Jeff Sellers, director of education and community involvement for the Tennessee State Museum, expects a “whole lot” of fifth-graders to come to the new museum (which opens in October). “The creation of the stand-alone class really helps us,” says Sellers. “It helps us target that age group and build resources connected to artifacts and primary sources.”

This also means big changes for Tennessee History for Kids. You see, carving out a stand-alone Tennessee history semester was just a small part of a larger process under which all social studies standards were rewritten for all grades, K through 12. The changes were so extensive that we are rewriting all of the Tennessee History for Kids booklets, not to mention making major changes to our website and teacher training.

Speaking of our booklets, there will be two new ones for the new stand-alone Tennessee history semester. So I’d better get back to it!