The buck stops where? 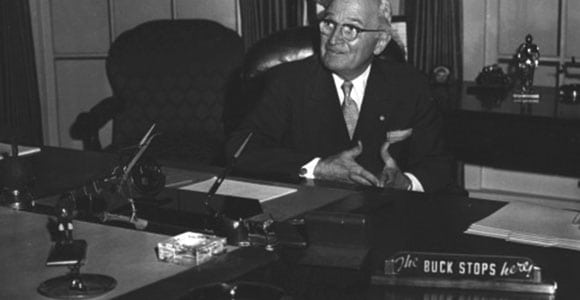 Have you ever wondered where the phrases “the buck stops here” or “pass the buck” actually came from? In January 1953, President Harry S. Truman said, “The president — whoever he is — has to decide. He can’t pass the buck to anybody. No one else can do the deciding for him. That’s his job.” More recently, President George W. Bush agreed with this sentiment and referred to himself as the “decider-in-chief.” I’m sure many of you will recognize the iconic image of the sign on President Truman’s desk in the late 1940s that told anyone in sight of it who was in charge. The modern-day connotation of this famous phrase is about an individual taking ultimate responsibility for an action, as the quote from President Truman shows. But I never understood the full meaning because I was confused about the word “buck.”

I recently learned that the phrase originated from an action that took place while deciding who should deal the next hand in a game of poker. In this case, “buck” is not another word for money, like I have always incorrectly assumed, but instead refers to a buckhorn knife that was placed on the table, pointed toward the person whose turn it was to deal. If a player didn’t want to be the dealer, he would “pass the buck” to the next player. He literally would move a knife across a table. My mental image of Wild West cowboys passing money back and forth across a saloon table now seems a bit silly. Armed with this knowledge, I have a new appreciation for these common expressions.

This year, our lawmakers made a decision that changes exactly where the buck will stop on something that has a very tangible impact on many rural and not-so-rural Tennesseans. For nearly 60 years, Tennessee’s cities have been able to expand their borders and incorporate new tracts of land simply by the city council taking a vote. Approval of the annexation of the previously unincorporated land came through an ordinance.

The problem? The citizens most impacted by the decision, those who were not residents of the city prior to annexation, had little ability to influence the outcome of the council’s vote. That’s because only residents of the city elect the members of the city council. And, therefore, those council members represent and respond only to citizens of the city and not those who live outside the city. At the moment the vote is taken, those to be annexed had no representation on the governing body that decided whether their property would become part of the city. This system is referred to as forced annexation or annexation by ordinance. As has been done in most other states, it is now a thing of the past.

The General Assembly overwhelmingly passed legislation sponsored by Sen. Bo Watson (R-Hixson) and Rep. Mike Carter (R-Ooltewah) that bans forced annexations. Now, approval must come through a referendum of those individuals who are to be annexed. This should give residents of the county a direct voice and choice over whether they will be included in the city. An important exception, however, applies to agricultural land. Only the written permission of the specific property owner(s) is required in these cases.

When it comes to annexation, the buck used to stop at the mayor’s office, but now the buck stops with you. As I see it, the most important result of this change will be increased communication among counties and cities as they perform the nuts and bolts of local government. Planning of urban growth boundaries, extension of services, determining boundaries of school systems and other similar projects will likely require more coordination among city councils and county commissions to ensure the will of the entire public is adhered to. Communities will have to cooperate with each other to achieve common objectives.

Let’s see, then: If we have more communication, better coordination and cooperation among ourselves, I think that is a good thing. Wouldn’t you agree?