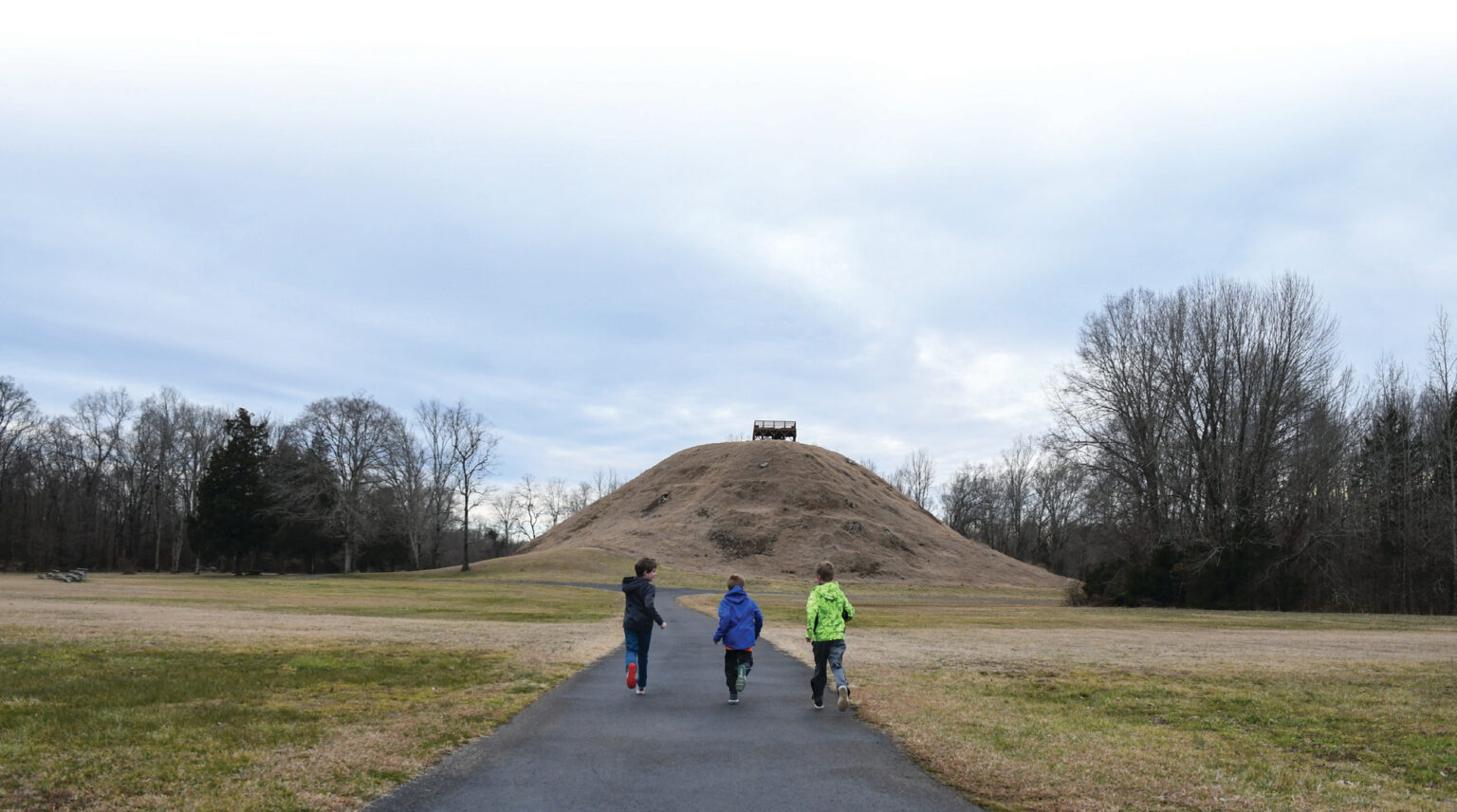 The Heights of History

Visiting many of Tennessee’s state parks is a bit like taking a trip in a time machine into the state’s history — only without having to worry about meeting your younger self, the butterfly effect or finding yourself in a dangerous situation. But for those who visit Pinson Mounds State Archaeological Park, that time machine is traveling back even further into prehistory: the time before recorded history in America.

Long before the first White settlers made their way to the Watauga or Sycamore Shoals area of East Tennessee in the late 1760s, Native peoples of the Middle Woodland period (200 BCE to 500 CE) made what is now Madison County their home. Though they are long gone, evidence of their existence is visible in the 15 earthen mounds preserved by the park.

The Pinson Mounds complex includes Sauls Mound, a 72-foot platform mound built approximately 2,000 years ago. Theorized to be the central mound of a solar/lunar calendar marked by strategically placed earthworks, Sauls Mound was the tallest manmade structure in the United States region for more than 1,000 years. Preserved within this complex are other earthworks, including Ozier Mound, the only Woodland period platform mound with an intact ramp; the Eastern Citadel, a geometric enclosure that circles several acres; and the Duck’s Nest, a feature that held a large fire nestled along the Forked Deer River, potentially marking the site to river travelers.

“Madison County’s role as a hub for commerce was even apparent in prehistory,” says Park Manager Tim Poole. “Archaeological field studies at the Pinson Mounds complex have identified artifacts that show a strong trade network existed across the continent during the Middle Woodland period. Obsidian, copper, seashells and other materials with far-ranging origins were included among the trade goods discovered by archaeologists.”

Sauls Mound is currently the second tallest mound in the U.S. The only one taller is Monks Mound at Cahokia Mounds in Illinois, which was built during the later Mississippian period (about 800 CE to 1600 CE). Pinson Mounds is the largest mound group from the Middle Woodland period in the entire country.

Recognizing the significance of this site, local residents back in the 1950s and 1960s urged the state to purchase the land, and it officially became a state park in 1974. Today, the 1,200-acre park is designated a National Historic Landmark and is on the National Register of Historic Places.

“Pinson Mounds is not only a sacred site but also a world-class heritage site, and we are working toward the goal of achieving World Heritage status as we are on the par with places like Cahokia and Stonehenge,” says Poole, who has an obvious passion for archaeological, historical and cultural sites.

Despite what is already known about the mound complex, which was used for both ceremonial and burial purposes, research continues.

“Since 2013, we have partnered with the PEARL Field School, a ‘dream team’ of archaeologists from across the country, to research various aspects of the archaeological structures at the park, with the most recent findings soon to be incorporated into the Cochran Locale Trail, which is presently in the design and construction phase,” Poole says. “We appreciate having received a Trail Pack grant as well as our Friends of Pinson Mounds group receiving a Friends of Tennessee State Parks grant to support the development of this new interpretive opportunity.”

The park is also currently utilizing an Iris Fund grant to create a medicine wheel with native plants along with multiple ongoing resource management projects to help protect both the cultural and natural resources located within the park.

ADA upgrades are also being undertaken as part of Tennessee State Parks’ ACCESS 2030 Initiative. This expansion will include having the paved trails connect to the pavilion at the group camp, opening that facility to additional visitors, increasing paved access across the group camp and fire ring/grill area to enhance accessibility for that rentable facility, and providing additional visual and auditory interpretive opportunities in the museum and ADA seating in the auditorium.

Pinson Mounds, like its sister parks across the state, has seen an increase in visitation over the course of the pandemic. During 2020, the park’s normal annual visitation of around 85,000 jumped to about 100,000.

“Many area residents who had not visited their community ‘backyard’ made a first trip to our park across the pandemic, and we enjoy seeing them as return visitors now,” says Poole, who has been the park’s manager for 18 years.

Visitors from near and far will likely make their way to the park this September for the 40th Annual Archeofest, which is a celebration of the site’s history, prehistory and archaeology. There will be music performances, traditional dance, lots of demonstrators and presenters on various topics, birds of prey and reptile programs as well as food and other vendors. The event is scheduled for Sept. 17–18.

Poole cites previous costumed interpretation events at the park as some of his most memorable moments there.

“Often I wish to see through a window to catch a view of what this beautiful, sacred site may have looked like 2,000 years ago,” he says. “Two times I have had the closest glimpse possible: First was with the Woodland educators Jessica Diemer-Eaton and her husband Mark, who set up a temporary outdoor interactive lifeways exhibit at Archeofest a few years ago. When I walked around the trail beside the mound, I saw the temporary/portable Woodland style home with Jessica going about her day as someone 2,000 years ago would have. Children just walked right in, and one little girl sat down beside her and started helping. Second was seeing a group of Aztec dancers doing traditional dance celebrating the summer solstice with the large Sauls Mound in the foreground. Seeing those sights and sounds was incredible.”

Poole says a question he and the staff at Pinson Mounds are asked a lot is whether the building that houses the park’s office, museum, gift shop and 80-seat theater is a mound itself. The answer is no, but it was built to look as if it is. The construction just adds to the park’s atmosphere while also housing an impressive collection of museum exhibits and the West Tennessee Regional Archaeology Office.

While the main draw to Pinson Mounds is, of course, the remarkable way you can see and explore with your own eyes an impressive part of the distant past, the park does have other things to offer visitors. Among them are hiking and biking trails, picnic facilities with grills and a group camp with four cabins. The more than 6 miles of trails are a mixture of paved and gravel and allow guests to explore not only the historic aspects of the park but also the natural ecosystems, flora and fauna.

Poole encourages visitors to really get to know the park and what it offers.

“The more you visit a site, the more you notice about it, the more it becomes a part of you and the more engaged you become with it. So, for example, if you are a runner, you might want to know that we have paved trails that serve 5K, half-marathon, marathon and other racing events. If you are a birder, we have everything from tiny hummingbirds to majestic bald eagles and everything in between that can be observed at the park, and we offer a birding guide at the museum entrance. If you enjoy watching the night sky, we offer programs at various times of the year for stargazing. If you find you want to be more active with our park, the Friends of Pinson Mounds is
a welcoming support organization. This group helped us kick off park honeybee hives, and we host a Virtual Honey Bee 5K and seasonally have park honey for sale in our gift shop.”

Poole says that Pinson Mounds is the kind of place where you simply have to come and explore for yourself.

“We can read and research about a place, but until you come here and experience the true sense of place and experience a connection with the past, it cannot be fully appreciated. It is a must see!”

The park is located at 460 Ozier Road in Pinson. Visit the park’s website at tnstateparks.com/parks/pinson-mounds or call the park office at 731-988-5614.