Your voice, our future 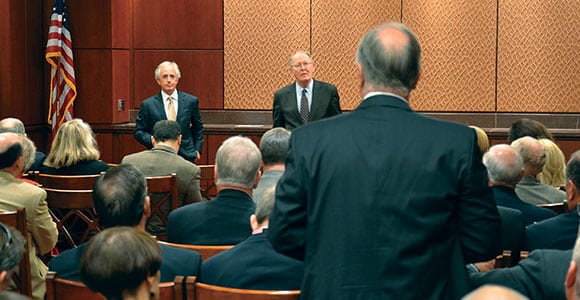 As a part of my job, I travel to Washington, D.C., several times per year. I have actually lived there three different times, although none was a permanent move — nor did I stay for very long. In each case, I had a specific job to do, and I knew that at the end of the job I would be headed home to Tennessee. The certainty of returning home is probably what made my living and working there more enjoyable. Regardless, I have quite a bit of experience in traveling there and back.

From my home outside of Nashville, it’s about an 111/2-hour drive, which I have made many, many times. Especially in the fall, the drive through Virginia’s Shenandoah Valley is beautiful. And the sight of the Great Smoky Mountains is always a great indicator that home is only three more hours away. But the long drive can be taxing, no pun intended. By plane, however, it is less than a two-hour flight.

Isn’t it amazing what air travel has done to shorten the distance between us? In my case, what once was a full day of travel is shortened to the length of a basketball game. For a period of time, I flew to Washington every Monday morning and back home to Tennessee every Friday afternoon. It became routine. More recently, there has been more than one occasion when I have spent the day speaking with our representatives at the Capitol and been home in time for my sons’ baseball games that same night.

What you may not be as aware of is that air travel has also changed the way the U.S. Congress works. Before air travel became so prevalent, many members of Congress called Washington, D.C., home and only returned to the districts they represented for special occasions. It simply wasn’t feasible to travel on a moment’s notice and be home in just a matter of an hour or two. Constituents wrote letters to their members of Congress to express their viewpoints, and for issues serious enough to justify the time and expense, regular people would travel to Washington themselves to petition their representatives in person.

Today, most members of Congress only spend a few days each week in Washington. Commuting from their homes all across the country at the beginning and end of each week is the norm, not the exception. I can attest that most of Tennessee’s current members of Congress follow this pattern, as I have shared many of the same flights with them as they travel back and forth. The result of this change has been that our representatives are spending more of their time with the people they represent and less of their time with each other. Some argue that this in-and-out-of-town lifestyle has increased the distance between members of Congress: They are with each other less frequently, which has contributed to decreased civility among legislators. Others would argue that spending more time with constituents, rather than other politicians, has resulted in policies focused more on the American citizen.

Regardless of your opinion on that question, however, the importance of communicating face to face with our leaders about issues that are important has not changed. And because affordable, reliable electric power is crucial to our society, your electric cooperative makes it a point to frequently communicate with our federal and state elected officials. Sometimes, I do it on your behalf in Nashville or D.C. Perhaps your representative will stop by the co-op’s annual meeting this fall and talk with members about how the cooperative makes the community a better place. Other times, it is essential that leaders from the co-op go to Washington and petition our representatives in person.

In May, nearly 2,000 electric cooperative leaders from as far away as Hawaii headed to Washington, D.C., to carry our voices to Capitol Hill. It was a busy week. The House of Representatives voted to approve the “Electrify Africa Act,” which will make it easier for U.S. electric cooperatives to share our expertise and help bring electricity to the nearly 600 million people in sub-Saharan Africa who still live in the dark. Our own Sen. Bob Corker will be leading the effort to pass this legislation in the Senate.

It was announced that the nationwide effort to tell the Environmental Protection Agency to support an “all-of-the-above” energy strategy has resulted in the largest grassroots outreach in the history of electric cooperatives as almost 600,000 Americans submitted comments to the EPA through the action.coop and TellEPA.com websites. We shared with the Congress how other actions they are considering would impact the cooperative you depend on. And at the end of the week, President Obama recognized the role electric cooperatives are playing in the development of renewable energy.

Most importantly, though, when cooperative leaders travel to D.C., our representatives receive an in-person reminder of life at home in rural and suburban Tennessee. It is great to sit in on these meetings and watch your neighbors reminisce with your representative about an old high school football game or a long-lost mutual friend. That way, whether the Congressman is home each and every weekend or only comes back to march in the Christmas parade, we know he or she will remember the hard work that goes into keeping the lights on and will make every effort to protect the people who pay the bills.