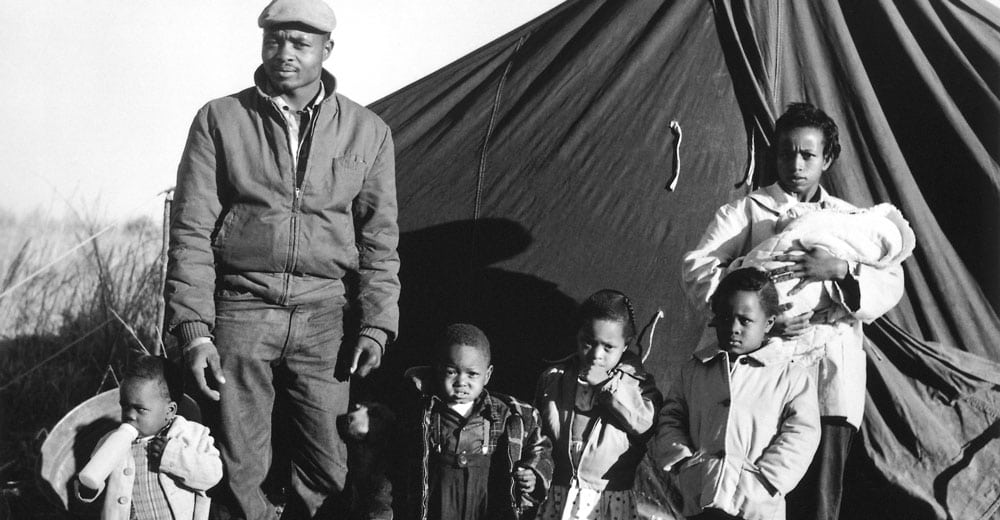 Thanks to the new social studies standards, the civil rights movement in Tennessee is finally receiving the recognition it deserves. In the high school-level U.S. history class, for example, students learn about how Fayette County’s tent city movement may have changed the course of American history.

It all began in 1940 when a Fayette County deputy sheriff was killed in a shootout outside the home of a black man named Burton Dodson. Dodson fled Tennessee after the event. Eighteen years later, Dodson was caught and returned to Fayette County where he was to be tried for murder.

Why? The reasons were rooted in the history of West Tennessee. Back in the 1880s, a majority-black district in Haywood County elected a black state representative named Samuel McElwee. McElwee served three full terms. However, by 1890, laws and practices were changed to make it practically impossible for an African-American to be elected to public office in Tennessee.

The laws and practices were clever in urban parts of the state such as Davidson and Shelby counties. But in rural areas, black citizens were intimidated from voting by acts of terror or simply not allowed to vote. The state of Tennessee and the U.S. government did not intervene to help African-Americans in places like Fayette County exercise the right to vote.

However, the world changed a lot between 1890 and 1959. At a time when many black Americans were beginning to demand fair treatment, the Fayette County situation brought to light a clear example of racial unfairness in the Deep South.

Two of the more prominent members of Fayette County’s African-American community were farmer and World War II veteran Harpman Jameson and local merchant John McFerren. Attorney Estes met with people such as Jameson and McFerren and began encouraging members of Fayette County’s black community to register to vote. But in August 1959, when a small group of African-Americans tried to vote, they were told by poll workers that they could not because it was an “all-white primary.” This led some of these people to create an organization called the Fayette County Civic and Welfare League.

After that organization filed a lawsuit contesting the legitimacy of the election, leaders in the white community (through an organization called the White Citizens Council) took steps to punish activism among blacks.

You see, in 1959, most African-Americans in Fayette County didn’t own land but worked as sharecroppers on white-owned farms and lived in small homes located on those farms. In the fall of 1959, many white landowners evicted their black tenants, leaving many families homeless. Many white business owners refused to extend credit to their black customers, making it difficult for black families to receive basic services and products such as gasoline and food.

One of the few black farmers who owned land was Shephard Towles. Some Army surplus tents were donated (in some cases by anonymous donors) and set up on Towles’ land near Somerville where he allowed evicted families to live. Within a few weeks, there were hundreds of people living in this “tent city.” Eventually, another tent city was created on land owned by a woman named Gertrude Beasley.

The evictions continued, the number of homeless families rose and more tents were donated. According to one estimate, 345 families were displaced during the peak of the tent city movement. Most of them took refuge in donated tents on Towles’ or Beasley’s property.

There are several good places to learn detailed stories of the tent city movement. One is called “Our Portion of Hell,” a book written by a civil rights activist named Robert Hamburger. Another is the website www.memphis.edu/tentcity created by the Benjamin Hooks Institute for Social Change at the University of Memphis. From these sources, you can read wonderful first-person accounts from people such as John and Viola McFerren, Harpman and Minnie Jameson and many others.

“Tent City was a miserable life,” recalls Early B. Williams, who was evicted by his landlord in the fall of 1959. “The tent was sixteen by fourteen … my wife and four kids livin’ there. We had to cook in there; we had to sleep in there; we had to eat in there. And mud — when it rained in Tent City, it got so bad on Tent City ground, you had mud almost up to your knees. McFerren managed to get food. We’d sit around outside. Nothin’ else to do.
“I was never sorry I registered. I figured we’d overcome someday.”

The more I read these stories, the more I am struck by four points about the tent city movement.

One is that it lasted a long time. It wasn’t just a few days, weeks or months. Although incremental progress was made every year starting in 1960, some families remained living in tents for as long as four years.

The second is that the movement received consistent national publicity. There were articles about it in newspapers such as the New York Times. People came from colleges such as Oberlin, Dartmouth and the University of Chicago to help register voters in Fayette County. A radio station in Pennsylvania raised money and supplies to send there. National labor unions donated tents and supplies to the cause.

To this day, there are mysteries about what happened in Fayette County during those years. For instance, at the height of the economic boycott, a gasoline wholesaler from Memphis (who was white) showed up in the middle of the night and sold gas to McFerren’s gas station. In doing so, that man risked his own business. To this day, the identity of that wholesaler is unknown.

Perhaps the most important point about the tent city movement is that it was far-reaching. In 1960, the events in Fayette County made it clear to the American public that, in parts of the rural South, African-Americans still could not exercise their right to vote and that the elimination of the poll tax had done nothing to change that. Even without lynchings and other violent acts, there were ways (eviction and economic boycott, for instance) to intimidate people from being able to vote. The federal government needed to do more.

In the 1960s, “more” consisted mainly of two landmark pieces of federal legislation we now know as the Civil Rights Act of 1964 and the Voting Rights Act of 1965. If you ever want to know why those two acts were passed, remember the 300 or so families forced to live in tents in Fayette County.