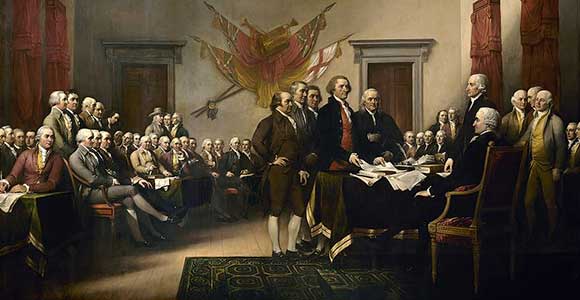 In the years before becoming our first president, Gen. George Washington fought two wars. The first was against the British. The second was fought concurrently against his employer, of sorts — the Continental Congress. During the nascent days of our republic, the unified states feared a powerful central government. That left the Congress with limited means to obtain funds to press the war. The individual states had their own concerns to deal with as well as supplying and funding their own militias.

Though Washington agreed to serve without pay during the Revolutionary War, his officers and men did not.

Washington spent untold hours attempting to spur Congress into approving requests for his army. Items today taken for granted like uniforms, food, arms, etc., were nearly impossible to obtain. Soldiers at Valley Forge suffered as much from governmental neglect as they did the weather. Throughout the war, Washington maintained a steady barrage of letters to Congress and the states, begging and cajoling them to honor the sacrifices being made by the men.

It was an effort that would last the duration of his commission. Even as the Treaty of Paris was being negotiated in 1783, Congress adjourned without approving pay for the soon-to-be-furloughed troops.

How did Washington maintain his belief in a system that was “a half-starved, limping government that appears to be always moving upon crutches and tottering at every step”?

Washington believed in a strong central government. Knowing this was the path for longevity and stability for the new nation, the travails of his army through eight long years only strengthened this belief.

Washington also knew that “criticism of error is the prerogative of free men.” In 1781, he wrote, “The people are discontented, but it is with the feeble and oppressive mode of conducting the war, not with the war itself.”

The wartime general swore his allegiance to the civilian Congress. He also had an obligation as a leader. He successfully managed both, supporting the Continental Congress in its endeavors while, at the same time, skewering the same group for not attending to its duties. As harsh as his criticism would be, his patriotism was unchallenged.

Through the sheer force of his character, he was somehow able to win a war with partners who often worked at cross purposes. He kept his army together long enough to defeat the British.

Electric cooperative leaders are sometimes taken to task for being critical of the administration or Congress. It’s not that we’re inclined to oppose any and all regulation. We’re not being obstinate for the sake of being obstinate. We have a job — an obligation to our members — to keep the lights on. When we see decisions being made that are imprudent or misguided, we have to speak up.

Without the criticisms leveled at the Congress by Washington, the plight of the soldiers and quite possibly the war could have been quite different.

Quoting from Ron Chernow’s “Washington: A Life,” “The long fight against British tyranny, paradoxically, only strengthened his view that the foremost political danger came not from an overly powerful central government but from an enfeebled one.”

Washington had a tough eight-year battle. Yet he maintained the leadership of his men and his respect for civil authority. His continual prodding of Congress pushed it to respond to the needs of the country.

Let your voice be heard: positive or negative, in praise or criticism. Above all, be informed. The less patriotic move would be to remain silent.

To learn more about energy policy and how you can be involved, visit www.tnelectric.org.