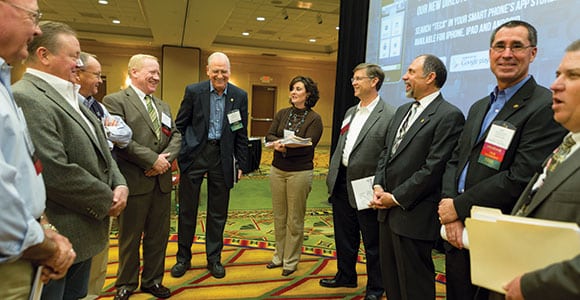 You’d expect people within the cooperative community to praise the cooperative business model. If we didn’t, we should probably rethink our vocation. Those of us who work in the industry are proud of what our co-ops have accomplished for our members. With thousands of cooperatives in the United States, it is a well-founded model firmly entrenched in all sectors of the business community.

Occasionally you’ll hear about a new concept of doing business. You read further and find out that it really isn’t a new concept but an idea that’s been around for quite a while.

Cooperatives of all types have seen a global resurgence over the past several years. Whether the product is clothing, food or electricity, cooperatives provide individuals some measure of control over their destiny. Given the Wall Street tumult of 2008, individuals are more likely to trust small, community-minded ventures instead of large corporations.

But there was a period long before 2008 that magnified the stark difference between investor-owned corporations and cooperatives.

Wall Street of the 1980s was an era of transforming big companies into big profits — not by running a company, but by dismantling it. Many large companies, from RJR Nabisco to TWA, were forever changed by corporate raiders who gained leverage on boards and pushed for changes that delivered maximum profits.

Carl Icahn is one of the wealthiest investors in the US. In the 1980s and ’90s, Icahn would have been called a corporate raider, buying and dismantling companies to maximize his investment. Icahn is a prolific investor whose motivation is still to “make money,” but a current-day rebranding would call him a “shareholder activist.” As he gains leverage at companies, he pushes to place colleagues on those boards.

This new concept of shareholder activism pushes for engaged boards that actively manage companies. Icahn recently made a statement that, while likely unintentional, is a testimonial for the cooperative business model. Icahn explains that many boards aren’t motivated to make good decisions. He compares some boards to lunch clubs whose members really aren’t involved, or invested, in the company. He stated, “If you could sit in on some of these board meetings, you’d be shocked. … You’ve got to have people that own the companies sitting on the boards to hold them accountable.”

What a great concept.

Our electric co-op boards are composed of member-owners of the cooperative, leaders whom other members have elected to represent them. Part of our mission at the Tennessee Electric Cooperative Association is to keep these directors informed and engaged.

Cooperative board members have to understand the fundamentals of the utility business. Though a co-op’s staff provides technical expertise, information and proposals to directors, the ultimate decisions are made in the board room. The accountability is that the board members, just like other co-op members, will be living with those decisions.

To ensure that our boards are kept up-to-date in a fast-changing industry, directors are expected to continue their education long after election to a board. That’s accomplished in a variety of ways — from formal classes and seminars to participating in local community activities.

Several weeks ago, directors from across the state met at our annual business meeting in Nashville. The biggest focus was on continuing to carry out our central task — keeping the lights on safely and efficiently. Safety is always a topic for education and improvement. The electric utility business is complex and capital-intensive, and for many, it’s also extremely dangerous. The meeting also featured prominent business experts who provided glimpses into the financial challenges we all face.

Adding to the complexity of our business is dealing with political pressures. Current efforts underway in Washington, D.C., could dramatically increase the cost of power. Even worse, these efforts would increase costs while reducing the amount of electricity generated.

Among the speakers at our meeting was former Missouri Rep. Jo Ann Emerson, selected recently by our national association as its CEO.

She shared her background and her vision for the future. Her many years of experience in Washington aren’t what qualified her for the job; it was that experience combined with her firsthand knowledge of the needs of rural America. Missouri’s 8th Congressional District, which she represented for more than 16 years, is one of the nation’s poorest and most rural. The residents of the district, including members of nine different electric cooperatives, felt she represented their needs well enough to keep sending her back to Washington year after year.

In a sense, she is still working for the rural residents she has represented for so many years. Cooperatives need that type of leadership that understands their communities: You don’t have to explain your needs. Leaders know because they share your needs.

The cooperative business model is the purest form of “people that own the companies.” Co-op boards and employees will always have a vested interest in making the decisions that are good for their neighbors and themselves. Understanding the needs of the community isn’t as difficult when you live there.

For some on Wall Street, shareholder activism represents a new concept. But we’ve been doing that on Main Street for decades.