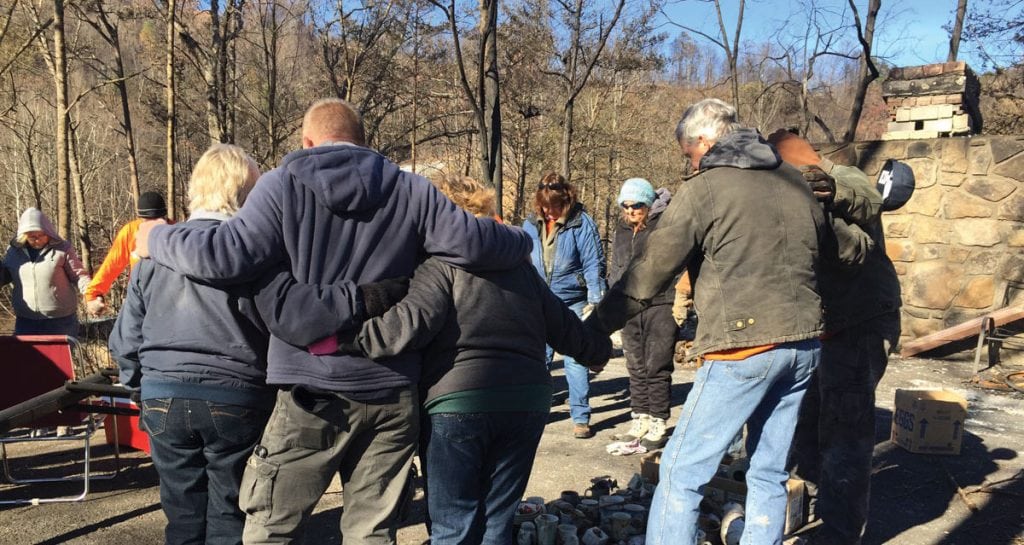 The Chimney Tops II wildfire made time stand still as only a disastrous event can. The wind-swept fires stopped daily life in the hardscrabble region in its tracks on the evening of Nov. 28. A season of record drought left thick ground cover of the forest floor bone-dry and set the stage for the worst Tennessee wildfire in memory. Officials believe the senseless act of two teenagers throwing lighted matches onto the Chimney Tops trailside may have led to the remote fire that began Nov 23. Still burning five days later, hurricane-force winds fanned the flames into an inferno, red-hot embers carrying considerable distances and igniting numerous fires across the southern region of Sevier County.

“I remember I went out in the morning at about 10, and it looked so eerie, very orange,” says Gatlinburg resident Andrea Ludden, recalling the events of Nov. 28. “It had been smoky for two weeks, but on Monday it was very heavy.”

“I had some errands to do, and Alex, my brother, mentioned maybe we should get some things together just in case,” Andrea says, standing in front of the burned-out ruins of thier home. “I’m like, ‘Ohh — come on. They are saying the fire is in the park, and we’re far from the park. We’ll be fine.’”

She had no way of knowing that in a few hours, she, Alex and their father, Rolph, would be fleeing their home.

“We just had a regular day and tried not to go outside because of the smoke,” she says. “By sunset, the wind really started to pick up. That’s when smoke started coming really hard. I remember getting some trash bags and stuffing them around the fireplace to keep the smoke from coming down the chimney.”

Like many, Andrea explained that they hadn’t heard much on the local news because the fire was still in the mountains and not in Gatlinburg.

“I remember earlier in the afternoon hearing news reports saying, ‘Don’t panic; it’s just a lot of smoke.’ So that was our mentality.”

As the winds increased, embers began to fall — as did fire-damaged trees and power lines. More fires ignited, making roads increasingly difficult to navigate as flames engulfed the surrounding hillsides.

“We heard the sirens on our street about 8:30 p.m. I went out, and they were at my neighbors’ house, yelling, ‘Get out, get out,’” Andrea says, recounting the frantic moments that allowed them only enough time to grab their dog and the keys to their vans. “I ran back to my house, trying to get the dog and tell my brother and my dad that we have to evacuate.”

“You just hear about disasters somewhere else, and you think, ‘I can’t believe how dumb people are,’” she says. “I tell ya, I think I’m a smart person, but we were so dumb that day.”

The Luddens’ home was destroyed. However, their beloved Salt and Pepper Shaker Museum in downtown Gatlinburg, begun by her late mom, also named Andrea, survived.

“Now, in hindsight — and, of course, hindsight is always wonderful — you look back and just wonder ‘if only,’” Andrea explains. “It was so smoky; that should have been our first warning.

“It’s not the feeling of the rug being pulled from under your feet. I had that feeling last year with my mom’s passing. This feels like the ground is gone. I’ve never been in this situation before.”

Like the Luddens, Christy Cover was at home that Monday night on Beanstalk Road where she lived with her stepmother, Sandra. “Sandy had gone to take care of her mother that day, and she called me about 7 that night and advised me to pack a bag because I might have to leave,” says Cindy. “In the back of my mind, I thought, ‘Nah, it’s not going to happen.’ But the longer I stayed, the smokier it got, and I got worried about my neighbor. She’s elderly and doesn’t get around too well, so I told her to pack a bag and went and picked her up.”

Cindy thought they would weather the storm at her house, but as smoke began to pour inside, she realized they needed to leave — a decision that likely saved their lives.

“When we left, I thought we’d come back and the house would be fine,” says Christy. But they returned to realize they lost everything: “There’s nothing left to remember my father by, no pictures, not anything.”

To make it even more tragic for the Covers, Jim, the family patriarch, died just two weeks earlier.

The Luddens and Covers represent just two stories of escape and loss to the wildfire. Tragically, 14 lives were taken that night, leaving more families with unbearable grief.

More would have certainly been lost if not for the heroic efforts of first responders and law enforcement during the tragedy.

In just a few painful hours, more than 2,700 businesses and homes were damaged or destroyed, and the lives of the 14,000 who evacuated were changed forever.

As flames raced up hillsides, devouring everything in their path, thousands fled down winding mountain roads lined with fire. Vacationers and residents alike made harrowing escapes through walls of flames. In their escapes, neighbors helped neighbors, strangers helped strangers.

The city of Pigeon Forge was relatively undamaged as was the strip in downtown Gatlinburg. Both were open for business just 11 days after the wildfire threatened to destroy them.

Residents, local officials, business owners and Rotary Club and church members have pulled together to help each other. With the help of the National Guard, Red Cross and an army of volunteers, a massive recovery effort was launched. Truckloads of donations have been received and sorted for distribution. A center was opened at the Boyd’s Bears facility in Pigeon Forge for residents to receive nonperishable food, clothes and supplies.

The people of this region are resilient, hardworking and determined — “mountain tough.” They will rebuild, and they will heal — especially with the outpouring of help and love they have seen so far from countless volunteers, strangers and friends.

The official website set up for the recovery efforts, mountaintough.org was built with the cooperation of Sevier County and the cities of Gatlinburg, Pigeon Forge and Sevierville to be a clearing house of information connecting people who need help or who want to give with the organizations they need to find. Donations of money, time and items are accepted. For more information, visit mountaintough.org or call 865-430-7384.

Dolly Parton created the fund through her Dollywood Foundation to give grants to families who lost everything. For more information or to donate, visit dollywoodfoundation.org or call 865-428-9488.

The national park will offer updates at nps.gov/grsm and on its Facebook page — where you’ll also find videos explaining the scope of damage.