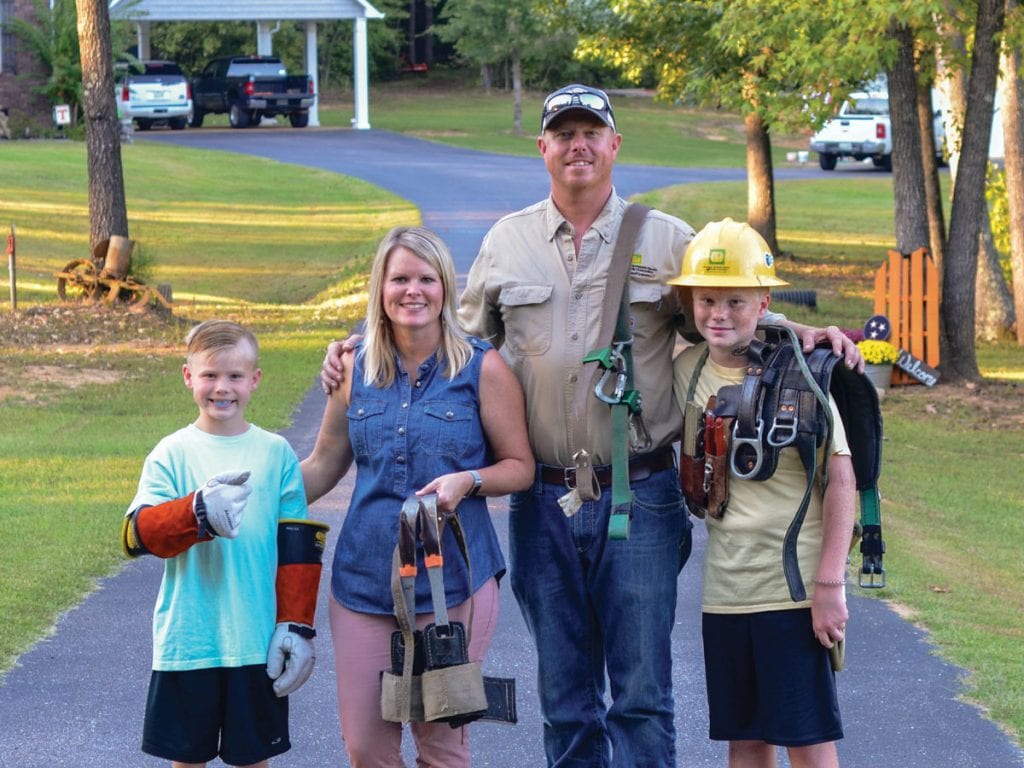 When Hurricane Florence struck the Atlantic Coast, co-op lineworkers from around the country rushed to the area to restore power. They — and their families — made sacrifices to serve strangers in need.

When Hurricane Florence made landfall at Wrightsville Beach, North Carolina, on Friday, Sept. 14, the Cupples family — almost 800 miles away in Henderson in West Tennessee — was watching with great concern. Ben Cupples, lead lineman for Southwest Tennessee Electric Membership Corporation, was one of 125 lineworkers from across Tennessee who volunteered to help restore power following the storm.

Experts predicted that Hurricane Florence would be one of the most devastating storms to strike North Carolina in 30 years. It was a massive system churning in the warm waters of the Central Atlantic — at one point it was nearly the size of Texas. For a week before Florence made landfall, utilities along the coast grew more and more concerned. A storm of that power and size could cause significant damage — more damage than their crews could repair on their own.

One of the founding principles of electric co-ops is “Cooperation Among Cooperatives.” This means that co-ops routinely provide assistance, or mutual aid, to one another during widespread power outages. In the last five years, electric co-ops in Tennessee have sent crews to Texas, Louisiana, Mississippi, Alabama, Georgia, Florida, the Carolinas, Kentucky, Virginia and as far away as New York to restore power following natural disasters like hurricanes and ice storms.

It was not unusual for North Carolina co-ops to ask for help, but their request did come with one surprise.

Assisting crews typically arrive a day or two after the storm passes, but the North Carolina co-ops wanted to respond quickly once the hurricane moved through. “They asked us to come before the storm so we would be able to go to work as soon as the weather cleared,” said Cupples.

This was the first time that Tennessee co-ops had been asked to stage crews in the path of a storm. “We wanted to help our friends in North Carolina, but we were not going to put our crews in harm’s way,” said David Callis, executive vice president and general manager of the Tennessee Electric Cooperative Association, the organization in Tennessee responsible for coordinating co-op mutual aid requests. “We worked with our host utilities in North Carolina to be sure that each of our crews would have a safe place to stay.”

Despite these precautions, there were still concerns in the Cupples home. “I was scared,” said Cheston, Ben’s son.

“I didn’t want anything to happen to him in the storm,” added Cheston’s older brother, Kase.

The fear was not limited to Ben’s children. “It was very unnerving,” said wife Jenna. “I’m a worrier, and you can’t help but think about it. Each morning, we would get in the truck to go to school and take a minute for the boys to pray for their dad and his crew.”

“When we made the final turn, we could see the edge of the hurricane on the horizon.”

“It was an eerie feeling,” recalls Ben Cupples. “For the last hour of the drive in, there was one vehicle with us heading east, and we only met three heading west. The interstate was deserted.”

“When we made the final turn, we could see the edge of the hurricane on the horizon,” he said. “It started raining as we walked into the hotel, and it rained for four days straight.”

The storm lost some of its strength just before making landfall. Though it was not the historic storm that had been predicted, it still left more than 326,000 co-op consumer-members in North and South Carolina without power and dumped feet of rain on the area.

It is not safe for lineworkers to be on poles or in bucket trucks in wind speeds above 35 miles per hour, but once the wind died down, crews went to work — slogging their way through widespread flooding to reach broken poles and power lines.

The two crews from Southwest Tennessee Electric Membership Corporation were joined by groups from other co-ops from Tennessee and 12 other states. Tennessee co-ops sent a total of 125 lineworkers and 86 trucks.

Crews worked 16 hours a day for nearly two weeks straight, and as the Tennessee co-op contingent started to return home, power had been restored to almost every home that could be safely reconnected.

“I am extremely proud of Ben and the work he does,” said Jenna Couples, “but we were ready for him to come home.”

Unfortunately, everyday life doesn’t stop while lineworkers are away. Ben missed oldest son Kase’s 12th birthday, and both boys had football games while he was working in North Carolina.

“And there wasn’t anybody to take us fishing,” added Cheston.

David Callis noted that the Cupples’ story is just one example of dozens just like it.

“When lineworkers leave home to work a storm, they are not the only ones who serve. We applaud their efforts, but it is important to remember that their families — their spouses and children back home — also make big sacrifices while they are away.”