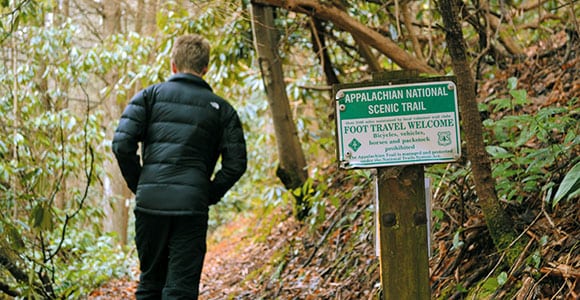 The Appalachian Trail stretches roughly 2,180 miles from Georgia to Maine. It crosses mountain crests, streams, rivers, dirt roads, Interstate highways, historic routes and small towns along the way. Some of its more scenic parts are in Tennessee.

Because the Appalachian Trail is so loved, there are entire books on its history, among the most recent being “The Appalachian Trail,” published by the Appalachian Trail Conservancy. The person most credited for the trail’s existence is Benton MacKaye, who envisioned a line of farms and wilderness camps along the crest of the Appalachian Mountains that would be loosely connected. Eventually a man named Myron Avery shifted this idea into a single trail that was planned, obtained and blazed by thousands of people in 14 different states.

The first documented case of someone hiking from one end of the trail to the other was in 1948, when World War II veteran Earl V. Shaffer made the trek in four months. Shaffer’s feat shocked people at the time since no one (not even Appalachian Trail Conference officials) thought anyone would ever want to do it.

Since then, thousands of people have done it, walking 10 to 20 miles per day and staying in some of the more than 250 shelters and campsites along the way.

What many people today do not realize is how much of the trail has been relocated since its early days. Laurie Potteiger of the Appalachian Trail Conservancy says about 90 percent of the trail has been moved since Shaffer’s day. “The original trail was done in the shortest amount of time possible, and some of it was placed on private land via handshake agreement,” she says. “Over the years, it was moved for all sorts of reasons.

“For instance, the original trail might have gone straight up a hill and straight down, which was hard to hike and also led to erosion and other problems. Over the years, volunteer groups have gone in and created a series of switchbacks that are better for the environment.”

One thing that makes the Tennessee portion of the “AT” (as the Appalachian Trail is affectionately known), is that we share most of our part of the trail with another state. For 200 miles or so, the AT is very close to or right along Tennessee’s boundary with North Carolina. This means that many of the people hiking along the Appalachian Trail are actually stepping back and forth from one state to the other as they go.

The northern tip of the Appalachian Trail is at Mount Katahdin, in Maine. From there it is about a 1,900-mile walk — through New Hampshire, Vermont, Massachusetts, Connecticut, New York, New Jersey, Pennsylvania, West Virginia, Maryland and Virginia — to where the trail crosses into Tennessee.

What are some of the most noteworthy sections of the trail in Tennessee?

In extreme northeastern Tennessee, the trail proceeds along the border of Sullivan and Johnson counties along the top of Holston Mountain. One of the better-known landmarks here is the “Uncle” Nick Grinstaff Monument, which honors a man who “lived alone, suffered alone, died alone.”

This gives me an opportunity to make an obvious point: The Appalachian Trail is best enjoyed with a friend or group of friends.

In Carter County, the trail winds around beautiful Watauga Lake, then actually heads east for a while before it starts the long climb up Roan Mountain. Along the way it crosses Carvers Gap — where the Overmountain Men crossed the mountains on their way to the Revolutionary War Battle of Kings Mountain.

A few miles later, in Unicoi County, the trail descends to the Nolichucky River and dips into the town of Erwin. It is here that hikers stay at a hostel just a few yards from the trail known as Uncle Johnny’s. If you want to sit for a spell and meet some people who are hiking the Appalachian Trail, this may be the most convenient place in Tennessee to do so.

For most of its journey through Greene County, the AT hugs Tennessee’s border with North Carolina in some very remote parts of the state, including the northern section of the Cherokee National Forest. Many hikers join and leave the trail in Greene County, where State Highway 70 crosses the trail at a place called Allen Gap.

Also along the Appalachian Trail in Greene County, you will find one of my favorite place names in Tennessee: Big Butt. 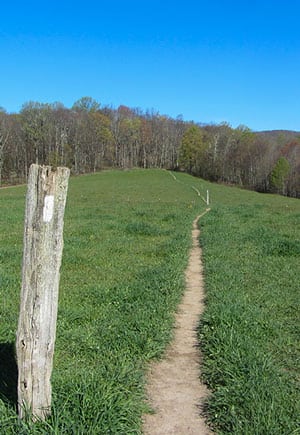 After the trail dips into North Carolina and crosses the French Broad River, it returns to Tennessee in Cocke County. There, the best-known footpath in America crosses one of the busiest Interstates in America (Interstate 40). One would think that this would merit a visitors center or a plaque or something. But the only clue (at least that I could find) that the Appalachian Trail goes under I-40’s Exit 451 is a white speck on the traffic sign, meant to assure hikers of the route.

From here it is a day’s hike to a wonderful overlook at the top of Mount Cammerer.

Next it is on to Sevier County and the Great Smoky Mountains, where you will find some of the busiest and most scenic parts of the Appalachian Trail. In Sevier County, the trail passes Mount Guyot, Charlie’s Bunion, Newfound Gap and Clingman’s Dome, the highest point in Tennessee.

The trail then crosses into Blount County, where one of the main trail destinations is Gregory Bald, especially in the spring because of its beautiful azalea flowers. Near there, the trail passes Rocky Top, an overlook that is believed to be the namesake for the University of Tennessee fight song.

About half way across Blount County, the trail takes a turn at a place called Doe Knob and heads into North Carolina, where it remains until it crosses into Georgia.