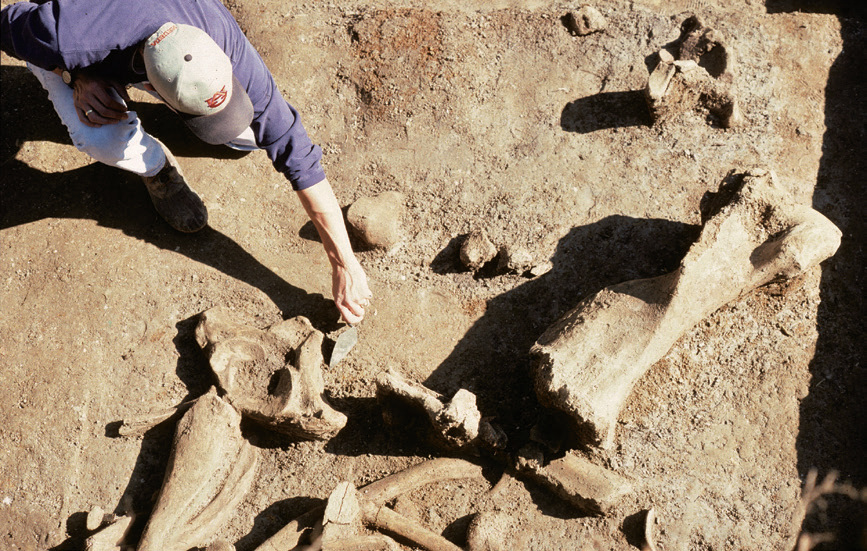 I’d like to devote this, my 200th column, to an interesting example of why even the best of columns can be right at the time but wrong in the long run.

Here’s an excerpt from the first edition of one of the fourth-grade booklets I wrote for my nonprofit organization, Tennessee History for Kids, called “Long March to Tennessee”:

“In 1994, workers were digging in Williamson County when they found a large bone. The workers brought in archaeologists who could tell that the bone belonged to a mastodon that died thousands of years before. They found many other bones, along with pieces of 34 stone tools.”

“Archaeologists believe that Native Americans were using the stone tools to remove meat from the dead mastodon. They believe this happened in the Paleo Period, which means it happened more than 10,000 years ago. This makes the people who were using the tools at Coats-Hines some of the first known Tennesseans!”

The reason I wrote about the Coats-Hines site in “Long March to Tennessee” is because it’s mentioned in the fifth-grade social studies standards. “Identify the cultures of the major indigenous settlements in Tennessee,” says the standard, including “Paleo (Coats-Hines Site), Archaic, Woodland (Old Stone Fort, Pinson Mounds) and Mississippian (Chucalissa Indian Village).”

However, this is a good time to point out that paleontologists, archaeologists and historians are learning new things all the time. What I wrote about Coats-Hines in “Long March to Tennessee” was accurate at the time (to the best of everyone’s knowledge). But a few years ago, another team of scientists led by a prehistoric archaeologist (and Middle Tennessee State University alum) named Jesse Tune re-examined the Coats-Hines site and came to a different conclusion.

“All flake fragments recovered from within the bone bed lacked distinctive physical traits which would conclusively demonstrate that they resulted from human manufacture rather than natural processes.”

In other words, the stone tools that archaeologists originally found near the mastodon bones were either just curiously shaped stones or stone tools that were not associated with the mastodon remains. “We thought we’d found evidence of Tennessee’s first barbecue,” says Aaron Deter-Wolf, prehistoric archaeologist for the Tennessee Division of Archaeology. “But at this point, we just think that we found mastodon bones.

“Mastodon bones are very cool things, and they are very old — between 25,000 and 32,000 years old. But mastodon bones alone don’t make it a Paleo Indian site.”

So in my most recent edition of “Long March to Tennessee,” I revised what I said about Coats Hines:

“Archaeologists are always finding new things and learning more about what we thought we knew. A few years ago, archaeologists discovered what they thought were Paleo-Indian relics and mastodon bones at a site called Coats-Hines in Williamson County. But extensive studies later proved that these human ‘relics’ were only pieces of broken stones. ‘I’m afraid Coats-Hines wasn’t a Paleo Indian site after all,’ Deter-Wolf says. ‘The bones of the mastodon were real but thousands of years older than the Paleo Indian period. We didn’t find evidence that humans were there using stone tools as we at first thought.’”

In any case, I find this to be an interesting example of why social studies standards, textbooks and history booklets have to change sometimes. I often meet people who are unhappy because, for whatever reason, textbooks and history books don’t contain the exact same information that they used to. But we are learning new things all the time — from journals no one found before, newspaper articles and advertisements no one dug up before and even archaeological data no one fully understood before. We who write articles, booklets and books have to do the best we can to keep up. When there are changes, new revelations and new theories, we can’t hide from them. We explain them, we move on and we keep digging.