As the leaves begin to turn and temperatures drop, visitors can plan an autumn outing that takes them back to the early and mid-19th century. The state’s three presidential homes comprise Tennessee’s Presidential Trail.

By Pamela A. KeeneSeptember 2022No Comments10 Mins Read 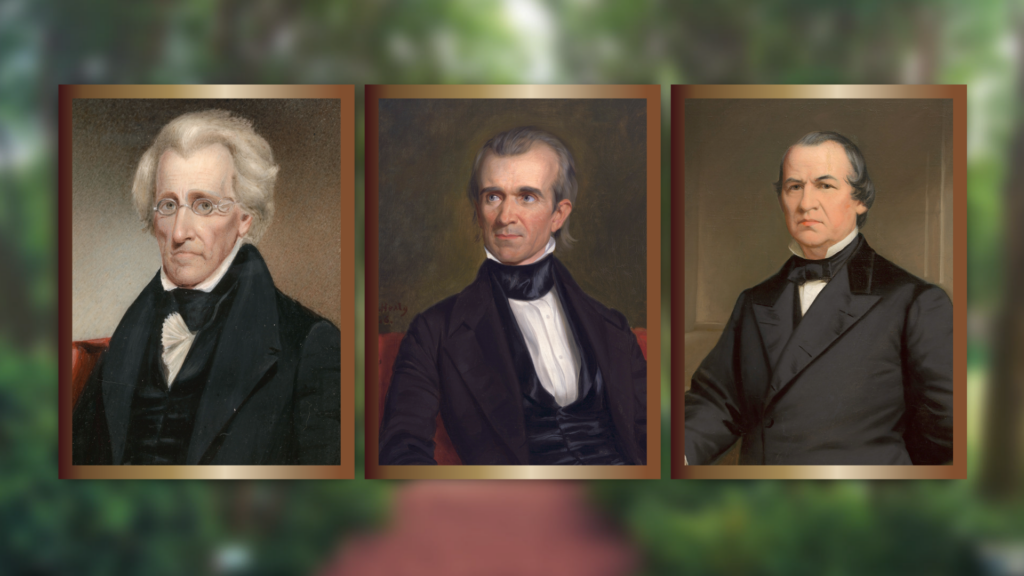 Three U.S. presidents hailing from the early days of Tennessee’s statehood helped shape the United States. Andrew Jackson (1829–37), James K. Polk (1845–49) and Andrew Johnson (1865–69) each held the nation’s highest office in this 40-year span. Each lived a major part of his adult life in Tennessee.

“The people of Tennessee are fortunate to have access to the well-preserved and curated homes of these three former presidents,” says Carroll Van West, Tennessee state historian. “All three of their presidential homes are central points of visitation for heritage tourists — not only to experience an historical perspective of these leaders’ influential presidencies but also to see how people lived in the early days of the Volunteer State.”

Seventh U.S. President Andrew Jackson named his original 425-acre farm The Hermitage. From 1804, he and wife Rachel lived in a two-story log cabin on the property while Jackson worked as a gentleman farmer and lawyer. Within 15 years, they built a brick two-story Greek Revival mansion where they entertained visitors from statesmen to foreign dignitaries and local residents.

Today The Hermitage is 1,120 acres and includes the mansion, gardens, tomb of Jackson and his wife, Alfred’s Cabin, Hermitage Church and the First Hermitage. The site is a National Historic Landmark.

“The Hermitage was Jackson’s primary home from 1804 through his death in 1845,” says Erin Adams, director of education at The Hermitage. “It is very well preserved; 90 to 95 percent of the furnishings are original to Jackson.”

Initially built as a family home, the rectangular house had a central entry hallway, a library and office on the east side and public spaces such as the parlor and dining room on the west side. A grand staircase leads to the second floor’s four bedrooms.

In 1831 while he was in the White House, Jackson added a one-story living space on each side of the central structure: a dining room on the west and a library and office on the east. This expansion made it possible to accommodate the many guests eager to meet the famous soldier and statesman. After an 1834 fire, the home was reconstructed to increase the ceiling heights and further enhance the interior in the Greek Revival style.

“Six of the rooms, refurbished in 1836–37, feature the vintage French wallpaper,” Adams says. “The entry hall is breathtaking, with what appears to be an unsupported staircase and a beautiful pastoral mural design against a sky-blue background.”

Jackson and wife Rachel are buried on the property. A copper-domed, columned monument dominates the family cemetery.

In the late 1990s, a tornado destroyed parts of the grounds and home, and further restoration work was done. The massive 40-foot-tall Eastern red cedar trees that lined the driveway to the house were replaced after the storm. Today, the new trees stand 20 feet tall.

The Hermitage is owned and operated by the Andrew Jackson Foundation.

The earliest daguerreotype of a presidential cabinet is among the prized objects at the President James K. Polk Home and Museum in Columbia.

“Our collection of artifacts, furnishings and documents is one of the most significant of any presidential site in the nation,” says Rachel Helvering, executive director of the President James K. Polk Home and Museum. “President Polk influenced our country in so many ways, from bringing in more than one-third of U.S. land — more than 800,000 square miles — to establishing diplomatic ties with other countries. He actually kept all his campaign promises, and he did it in only one term of office.”

Visitors will learn the story of Polk, who lived in the main house from 1818 to 1824. “It belonged to his parents, but it’s the only surviving residence of our 11th president, outside of the White House,” Helvering says. “He had planned to retire in Nashville, but he died only three months after leaving office. His widow, Sarah, along with her adopted daughter Sally and Sally’s daughter Sadie, spent the next 40 years building his legacy.”

The two-story, L-shaped home is a National Historic Landmark. Close to downtown, it is built in Federalist style with a beige brick façade. For most of his political life, Polk and Sarah lived in Nashville, and several objects from their Nashville home are on display in Columbia, including a fountain and iron gate relocated to the gardens.

Most of the interior of the Polk home has been set up to show Polk’s belongings from the White House and their retirement home in Nashville. The museum room shows artifacts and documents from Polk’s career from Tennessee politics to the U.S. House of Representatives and White House.

Owned in part by the state of Tennessee, the home and museum are operated by the James K. Polk Memorial Association. Docent-led tours of the main house set the scene for visiting the rest of the grounds, which encompass a city block. You’ll find the Polk Sisters’ House/Visitor’s Center, gardens and a reconstructed detached kitchen building. At the back of the property, the Presidential Hall, a former church, was purchased by the James K. Polk Memorial Association in 2010 as expanded exhibition space.

“One of my favorite pieces, aside from the daguerreotype, is a marble-topped table gifted to President Polk from the consulate of Tunisia,” Helvering says. “It features the presidential seal in marble from the ruins of Carthage; it was given to him after he opened a consulate there. And as a wedding gift, Andrew Jackson presented the newlywed Polk couple with a pair of portraits of themselves. It’s interesting to see that these great men had these types of relationships.”

As a part of the National Park Service, the Andrew Johnson National Historic Site in Greeneville captures the life and times of 17th U.S. President Andrew Johnson.

“Becoming president after the assassination of President Abraham Lincoln, Johnson was faced with a country in a time of extreme change,” says Shawn G. Gillette, chief of the site’s Division of Interpretation/Education. “The Civil War was still raging in the South, there were 4 million newly freed African American enslaved people, and the dilemma of how to restore a nation torn apart by war was emerging. Yet, Johnson, who was born in the South, pledged to a carry out Lincoln’s plan for reunification ‘with malice toward none.’ It made for a difficult presidency.”

The 16-acre site in Greeneville features the historic Andrew Johnson Homestead, a visitor center and museum, his early home and his tailor shop. The president and his family are interred at the 13-acre Andrew Johnson National Cemetery, also a unit of the National Park Service, which is 1 mile away.

The main house, called the Homestead, was Johnson’s home from 1851 until his death in 1875. During the Civil War, it was separately occupied by Union and Confederate soldiers.

“Before he returned to Greeneville, in 1869 Johnson sent his daughter Mary to restore and enlarge the home for the returning family,” Gillette says. “The home she restored is, with very little change, the home visitors see today.”

The National Park Service restored the Homestead to how it appeared in 1869, the year President Johnson and his family returned to Greeneville from Washington, D.C., following his presidency.

Exhibits in the Visitors Center and Early Home Museum not only reveal his complicated presidency, they also trace the timeline of a common man who started life as a highly skilled tailor and rose to become president of the United States.

“Visiting these two sites shines the spotlight on a president whose policies and actions are still relevant today,” Gillette says. “It is a testament to the American Dream, showing how a man, born into poverty, rose to prosperity and then became president. Though Johnson has the distinction of being the first president to be impeached and acquitted, his life and legacy reflect more than that.

“Visitors to the site discover that Johnson, though faced with adversity, never wavered in his faith in the U.S. Constitution and the American people.” 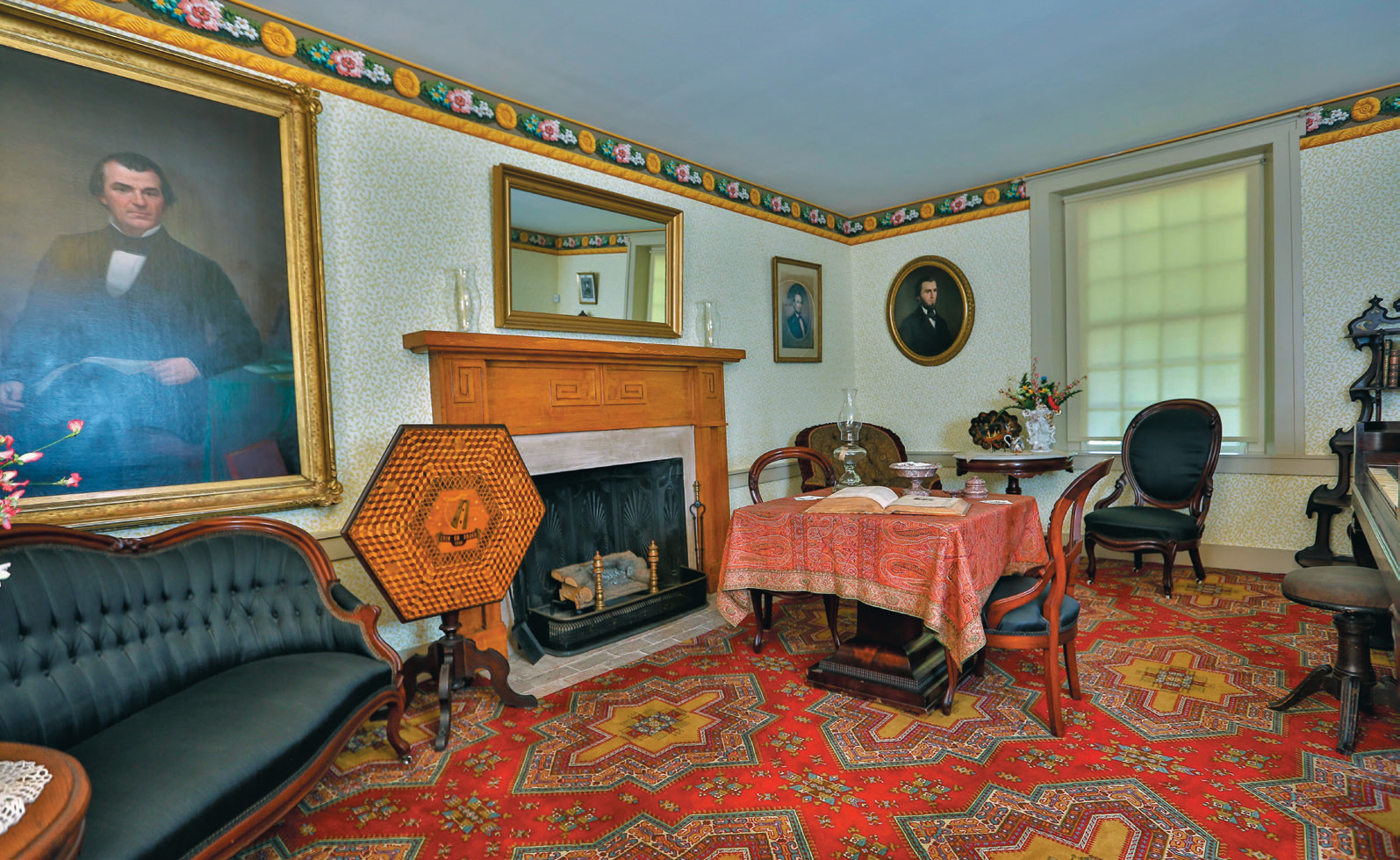 Over the centuries, Tennesseans have played meaningful roles in the development of the United States, and to have three presidential homes within the state’s borders is especially important. The Tennessee Presidential Trail makes it easy to learn more about these three presidents and their impact on the state, the country and the world.

“Visiting these presidential sites gives us insights that you never achieve from just reading a book or watching a documentary,” Van West says. “While we can’t literally ‘walk in their shoes,’ we can walk where they walked, stand where they stood, look at the objects they saw and experience the spaces where they lived. We can visit their place, a real place, and from there think about who they were and what they achieved in the context of where they came from.

“Tennesseans played a remarkable, impactful role in the history of the United States as it struggled to understand that a union of independent states could become a powerful nation that shapes the world. Jackson stood down the first threat of disunion, Polk expanded the nation to the West Coast, and Johnson picked up the pieces left by a terrible civil war and began to knit the nation together again. All three were controversial, then and now. But their significance cannot be denied.”

The three U.S. presidents who lived their adults lives in Tennessee were born in the Carolinas. Andrew Jackson, James K. Polk and Andrew Johnson each served in the nation’s highest office over a span of 40 years.

Seventh President Andrew Jackson was born on March 15, 1767, in the Waxhaw area of the Carolinas, and most historians list his birthplace as South Carolina. He died on June 8, 1845, and he and his wife, Rachel, are buried on the grounds of The Hermitage.

Eleventh President James K. Polk was born in Pineville, North Carolina — near Charlotte — on Nov. 2, 1795. Polk died on June 15, 1849; he and his wife, Sarah, are buried on the grounds of the Tennessee State Capitol.

Learn more about these presidents and Tennessee’s history by visiting the Tennessee State Museum in Nashville: tnmuseum.org.