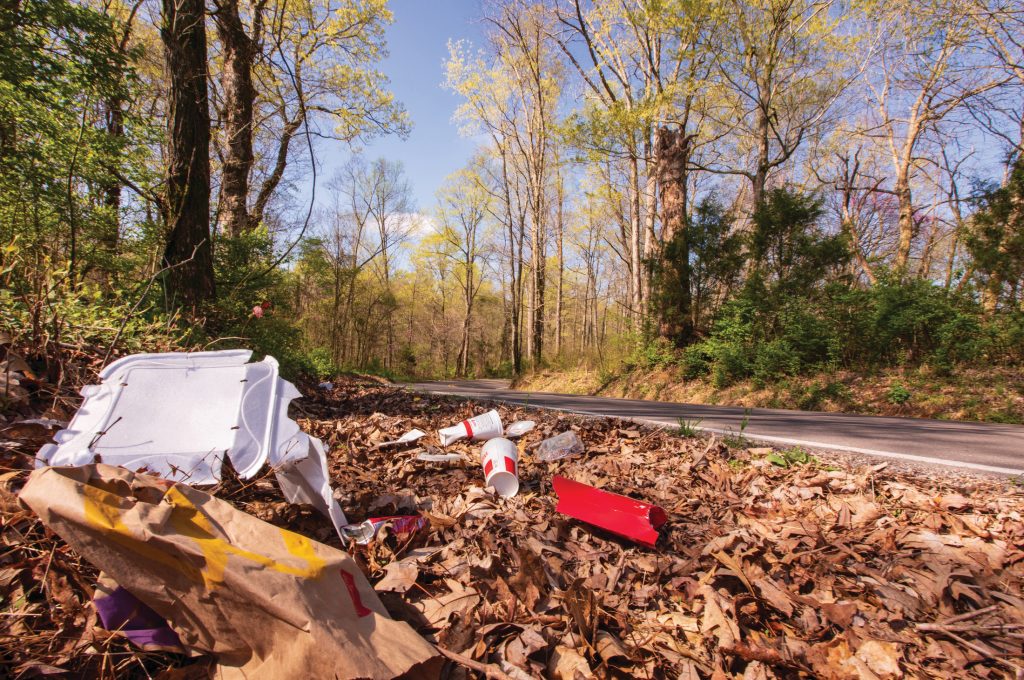 It’s a far too common sight, someone tossing an empty fast food cup or bag out the window of a moving car. Chances are, if you’ve ever been on or even near a roadway in Tennessee, you’ve either witnessed someone doing this or seen the result: piles of trash littering the sides of the highway. Each year, $15 million in taxpayer money goes to cleaning up the trash left behind by intentional or unintentional littering along interstates and highways.

That doesn’t even count the tens of thousands of dollars spent by individual counties to clean up along county roads. For instance, according to Anderson County’s Litter Free in Tennessee initiative, the county spends around $36,000 each year to clean up alongside 350 miles of roadway. And that’s just one of the 95 counties across the state. The Tennessee Department of Transportation does help subsidize some of the counties’ expenses through grants.

Tennesseans are proud of the natural beauty of the Volunteer State — from the rivers of the western part of the state to the lush mountains of the east. But too many of these landscapes are marred by plastic bags stuck on trees, cigarette butts, beer cans, soft drink cups, dirty diapers and even bigger things like discarded furniture. This doesn’t even count items such as household cleaners, paint and various chemicals that are more hazardous to the environment because they can contaminate the groundwater. A visible litter study conducted by the state revealed that, despite a drop of 53 percent in roadside trash between 2006 and 2016, there are still at least 100 million pieces of trash lining roadways, most of which could have easily been deposited in trash cans at the offenders’ homes or at nearby gas stations.

Following the field study that revealed these striking numbers, the Tennessee Department of Transportation (TDOT) in 2017 launched the Nobody Trashes Tennessee litter prevention campaign — funded by a production tax on soft drinks and malt beverages — that has three main goals: raise awareness about the state’s litter problem, stop littering and rebuild state pride. Remember: Tennessee residents aren’t the only ones who see the trash-lined highways. Millions of tourists also see those same eyesores and perhaps go home with a negative impression because of them. Elvis Presley’s Memphis mansion Graceland alone attracts more than 700,000 visitors a year, and the Great Smoky Mountains National Park is the most visited National Park in the country.

“We launched Nobody Trashes in June 2017 and plan to do a statewide performance assessment in June 2020 after we complete three full years of campaigning,” says Mike McClanahan, transportation manager with TDOT’s Highway Beautification Office. “Our research indicates that the public loves Tennessee and the natural beauty of the state but that they are unaware that litter is such a tremendous issue. The campaign has been well received by the public so far, and we’re building awareness, so we’re very hopeful for another decrease in litter.”

Among the findings of the litter study is that 30 percent of the state’s littering is “deliberate,” referring to the acts of the people you see tossing items out the car window as if the roadside is an appropriate trash receptacle. So how can littering be unintentional? Ever seen something blow out of the bed of a pickup truck? That’s unintentional littering, though it is also punishable by law.

In another statewide study, officials found the surprising statistic that intentional litterers skewed toward females between the ages of 16 and 34, though males weren’t that far behind. But the good news in all this — and what the antilittering campaign is targeting — is that of those surveyed, 9 out of 10 said they would be more likely to properly dispose of their trash after learning how big the problem of littering really is across the state.

“Decreasing litter is entirely about changing behavior,” McClanahan says. “Dollars spent on litter prevention education and on the education of youth are very effective. Dollars spent on the Nobody Trashes Tennessee campaign are incredibly important to spread awareness and reinforce that littering in our state is unacceptable. The reduction of litter between 2006 and 2017 is due largely to an increase in coordinated litter prevention education efforts.”

The law provides for differing levels of punishment depending on the type and extent of littering. For instance, mitigated criminal littering is for an amount less than or equal to 5 pounds or measuring 7.5 feet in cubic volume. It’s a class C misdemeanor and punishable by a $50 fine. A person convicted at this level may also be sentenced to do trash removal along highways, in parks or in other public areas as well as additional hours at recycling centers or other assigned facilities.

As the amount and frequency of littering increases, so do the penalties. For class E felonies — which would be for a third conviction for littering in excess of 10 pounds, a second conviction of amounts of more than 1,000 pounds or any amount for commercial purposes — penalties may reach up to $3,000 in fines and between one and six years in prison. To see more details about Tennessee’s littering law as well as those of other states, visit keeptnbeautiful.org/sites/356/uploaded/files/TNLitterLaw.pdf. 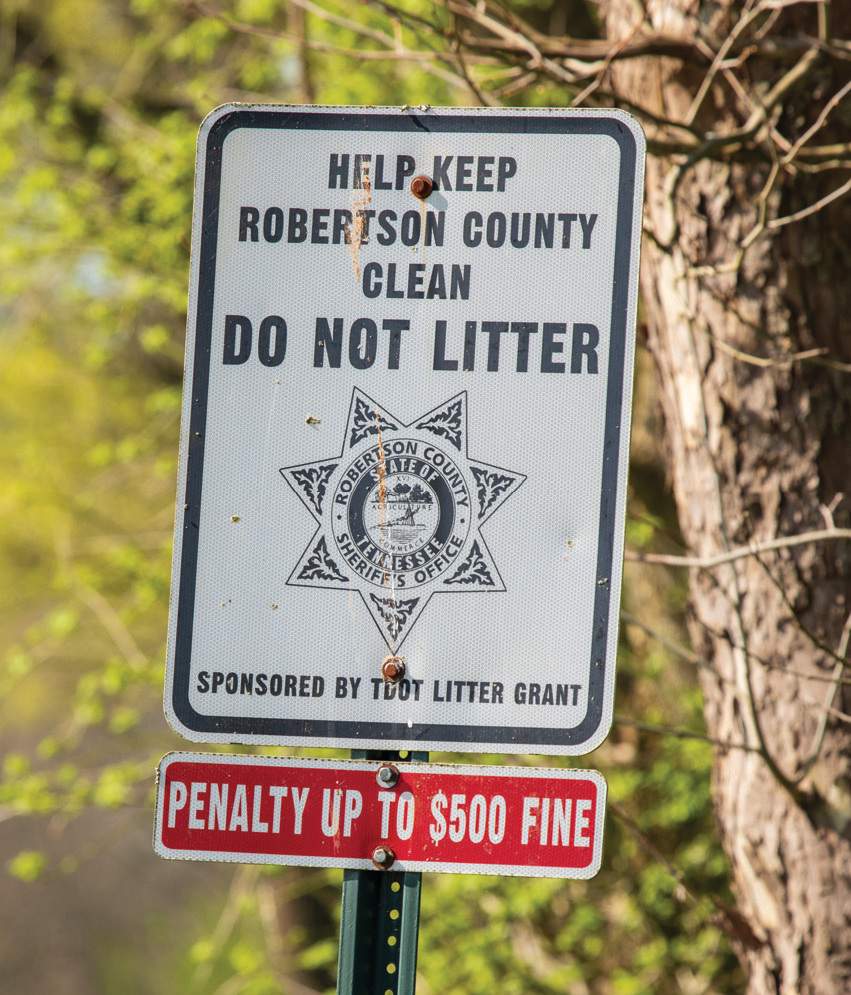 The first step to helping is making sure you don’t contribute to the problem yourself. Even if your car is messy, wait until you reach somewhere with a trash can — a gas station, a rest area, your home — to dispose of your trash. And teach your children to do the same.

You can take part in the Adopt-a-Highway program. Since the initiative was launched 30 years ago, volunteers have helped reduce the workload and expense of roadside trash removal by collecting 12 million pounds of trash. And just how much is 12 million pounds? The weight of more than 72 space shuttles!

“TDOT maintains more than 95,000 miles of roadways statewide, and each Adopt-A-Highway route is 2 miles long,” McClanahan says. “We currently have around 200 active Adopt-A-Highway groups and add new groups every week. This program is a tremendous win for everyone involved. TDOT gets the road clean, and groups get free roadside recognition panels and earn volunteer hours. Everything is 100 percent free; there is no fee to participate. The average clean-up has five volunteers and takes groups about two hours to complete. Using those averages, TDOT estimates a benefit $214.40 in volunteer hours per cleanup.”

Keep Tennessee Beautiful also sponsors local cleanups across the state. A listing of these events as well as information about the Adopt-a-Highway program are available on TDOT’s Nobody Trashes Tennessee website at nobodytrashestennessee.com/join-the-movement.

You can also report instances of littering by calling the state’s litter hotline at 1-877-8LITTER.

Mascots Trashsquatch and the Tri-Star Rangers also make appearances at schools, theaters and special events each year. Visit nobodytrashestennessee.com/trashsquatch if you’re interested in requesting a visit from a tall, furry ambassador who warns against the dirty practice of littering.