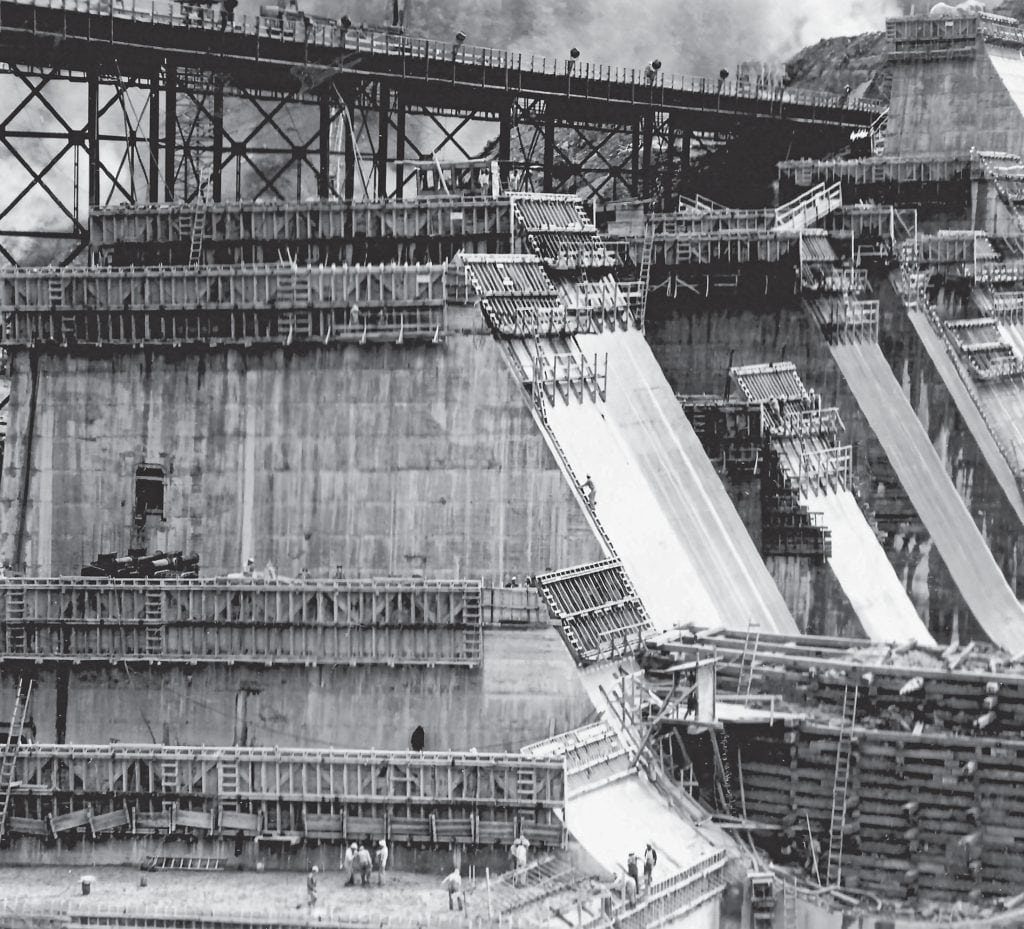 With world-record smallmouth bass, nesting bald eagles, lakeside campsites and nearly 28,000 acres, Dale Hollow Lake offers outdoor enthusiasts countless opportunities for recreation and relaxation. Sitting at the lake’s edge today, water lapping at limestone outcroppings, it might seem as if this is an ancient lake — one that Native Americans and early Cumberland settlers must have fished and navigated.

In fact, it is not. At one end of the reservoir stands Dale Hollow Dam, impounding the Obey River. As with all Tennessee lakes but one, Dale Hollow Lake is manmade and less than a century old.

The lone exception, Reelfoot Lake in the northwest corner of the state, was formed by a series of devastating earthquakes along the New Madrid fault line during the winter of 1811–1812. Eyewitnesses wrote that the Mississippi River flowed backward, filling a depression and leaving a lake where one had never existed. 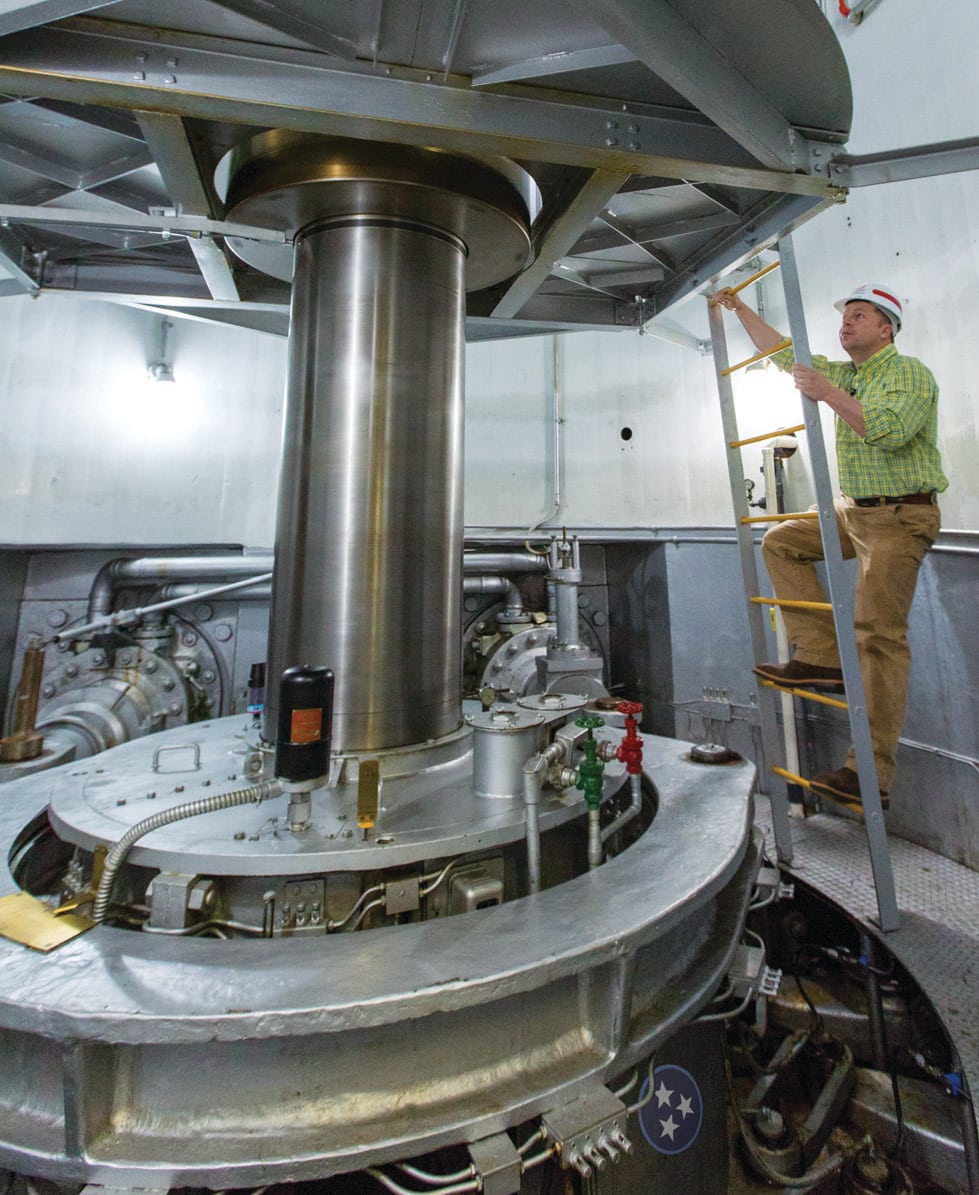 “In 2018, Dale Hollow Dam is celebrating 75 years of operation and meeting the mission for which it was designed,” says Dale Hollow Lake Park Ranger Sondra Carmen. “The dam continues to provide hydropower and support its other intended purposes such as flood risk reduction, water supply, environmental stewardship and outdoor recreation.”

To fully understand the impact this Army Corps of Engineer dam has had on the region, you have to step back to the 1930s.

During the 1930s and early ’40s, historic flooding, poor farming, lack of electricity and relatively few jobs throughout the Tennessee Valley led to an era of devastation and difficulty. The Great Depression took its toll on everyone; rural farming communities were especially hard-hit.

The groundwork for recovery began to take shape in 1933 with the first of Roosevelt’s New Deal programs and projects. Two of these were integral to Tennessee’s recovery: the Tennessee Valley Authority Act of 1933 and the Flood Control Act of 1938.

Prior to 1933, a few dams already existed in the Valley and at Muscle Shoals, Alabama. It was evident that fully harnessing the power of Tennessee’s major river systems — the Cumberland, the Tennessee and their tributaries — would become key to the Valley’s recovery.

The TVA Act formed the federal corporation to make the Tennessee River system more navigable, aid in flood control and provide electricity to the region. The Army Corps of Engineers was given basically the same mission along the Cumberland River system with the passage the Flood Control Act.

Before a 200-foot-tall dam spanned 1,717 feet across Dale Hollow, impounding the Obey, the river flowed freely and wildly, cutting through hollows for nearly 48 miles to its mouth on the Cumberland River. Today, headwaters of the East and West Obey forks begin outside Monterey and meet in Alpine at the eastern edge of the scenic lake.

Though controlling rivers like the Obey by building a system of reservoirs and dams would alter the landscape and displace families and whole towns, flood control and electricity were seen as greater goods for the entire Valley.

The Army Corps of Engineers Nashville District designed Dale Hollow Dam and supervised private contractors Morrison-Knudsen to build it. Construction began on March 2, 1942. The first bucket of concrete was poured on June 2, 1942, and the massive Dale Hollow Dam was completed 16 months later on Oct. 20, 1943, with 573,760 cubic yards of concrete forming its structure.

According to “Engineers on the Twin Rivers — A History of the U.S. Army Engineers Nashville District,” there was hope when World War II began in 1941 that three planned multipurpose projects in the Upper Cumberland Basin (Wolf Creek, Dale Hollow and Center Hill) would be rushed to completion because of the power they would produce. But the global war effort made manpower, materials and construction equipment so critical to the defense effort that work was suspended on Wolf Creek and Center Hill. Because Dale Hollow was further along, the dam was completed, but work on the powerhouse was discontinued until after the war.

Powerhouse construction and installation of three giant Francis turbines were begun in 1946 and completed in 1953.

“These are the three main generating units that we can bring online in four to six minutes,” says Stanley Carter, superintendent of the Dale Hollow Power Plant, standing on an observation deck in the powerhouse. “What we basically do is capture rainfall throughout the 935-square-mile drainage area for Dale Hollow Lake. It is then channeled in a very controlled manner through penstocks to the turbines that begin to spin due to the force of the water passing through. This, in turn, spins the massive generators, producing the electricity that is supplied to the grid for distribution to consumers. This process is how we provide the reduction of flooding in heavy rain events and produce environmentally clean power.”

“We generate enough electricity to power a town of around 45,000 people,” says Carter. “Most of our power is produced during peak energy demand times, which normally happen when everyone is getting ready for work in the morning or coming home late in the afternoon. We produce the power during peaks to even out the load experienced by the large coal and nuclear plants to help them be as efficient as possible.”

According to the U.S. Energy Information Administration, Tennessee has 109 hydroelectric turbines managed by TVA and the Army Corps of Engineers, making the state one of the top three hydroelectric power producers east of the Rockies. Together, turbines produce 87 percent of the state’s net generation from renewable sources.

The reservoir behind Dale Hollow Dam created a lake that covers parts of Clay, Pickett, Overton and Fentress counties in Tennessee and parts of Clinton and Cumberland counties in Kentucky. The lake spans 61 river miles and offers ample opportunities for fishermen, boaters, hikers, campers and horseback-riders.

Dale Hollow is also known for its bald eagle population. Tours are offered in January, but you can view one of the eagle nests year-round on a live eagle cam.