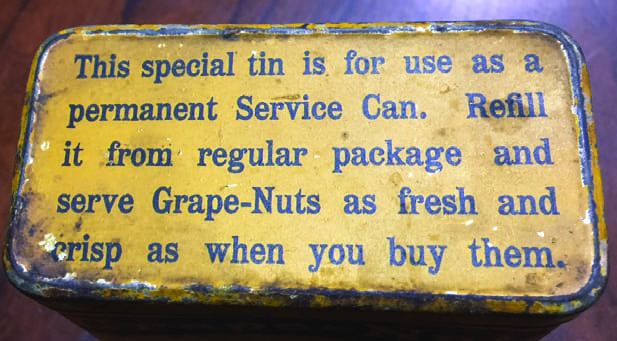 My 88-year-old friend, Joan, showed me this Shirley Temple pitcher. Her mother gave it to her when she was a young child. She loved Shirley so much. She was living on Long Island in New York at the time.

Joan asked if I could find out any information on it. Since I enjoy reading your “It’s Just Stuff” page in The Tennessee Magazine, I decided to ask you first.

Is there anything you can share with us? It is blue, reflected in the handle by the napkin.

Lots of little girls born in 1930 needed a bit of hope and cheerfulness. Shirley Temple, born in 1928, was a recognizable movie star by 1934. When the talented little ringlet-haired Shirley Temple became a star, her image was marketable among the cereal-for-breakfast crowd.

Shirley Temple cereal bowls, mugs and pitchers were made by the Hazel Atlas Glass Company from 1934 to 1942. On this set, she’s wearing clothing from her 1936 movie, “Captain January.” The puff of white image was featured on the Atlas Glass color called Ritz Cobalt Blue. Today, set pieces sell for $3 to $15 each. For all three, a buyer would expect to pay $35 to $50. In the 1980s, each piece would have sold for much more, and the set might have brought more than $100 at a high-end show.

Although Shirley Temple Black inspired people until her death in 2014, she is not well known among the little girls of the new millennium.

Enclosed are photos of my bird’s eye maple dresser. It has the original pulls. The mirror is held stationary with bolts when it sits on the dresser base. The date on the back is Oct. 20, 1880.

Can you give me a value of this? I inherited it from an aunt. Thank you. I love your page in The Tennessee Magazine.

Little girls who watched Shirley Temple movies in the 1930s probably wanted a dresser like yours. With a swan’s neck supporting the beveled mirror, serpentine front drawers and pretty little legs, this dresser begs to see a little girl smile at herself.

It’s difficult to see the bird’s eye maple beneath the patina on your dresser. It’s a nice feature, though. Similar dressers were made of oak. Maple dressers seem to have endured the environment better than oak. Although your dresser looks to be in excellent shape, too often dressers like this have buckled veneers and fussy drawers.

My grandmother had this old washboard, which was passed down to me. I have never seen one like this. Can you tell me anything about it?

Your grandmother’s washboard was made by four brothers named Hubbard. They made washboards with rollers that worked in opposite directions to lessen the work of washing by hand.

Beginning around 1900, they sold this Mother Hubbard model washboard door to door and soon expanded to produce quality and quantity products until more-modern washing machines made their hands-on models obsolete. The Mother Hubbard sells for $45 to more than $100. Overall good condition and visible markings bring higher prices. Washboards are popular collectibles.

I found this in the crawl space of a home we purchased in Kansas back in 1985. The house had caught fire many years before and sat empty. What can you tell me about its age and value?

Storage tins were a way to place a product more permanently in the home. Obviously, if the Grape Nuts tin was empty, it was time to replenish. Offered to the public around 1900, your two-color tin was covered with words of encouragement and the promise of good health. Grape Nuts does not contain grapes or nuts. Originally, it was made as a batter and pressed onto thin sheets, then cracked into its distinctive crunchy consistency. Similar tins are optimistically offered for $55 to $145. However, a tin just like yours sold in April for less than $5 on eBay.