Fashion with a heart

Many people see others in need, sometimes on a daily basis, but not everyone decides to do something about it. But in the small Obion County town of Troy, one woman made the decision to offer a leg up to women in her community who really needed it.

Two years ago this month, LeEllen Smith founded OUTsideIN, a cottage sewing business in downtown Troy that employs women who might not otherwise be able to get a job because of a lack of education, struggles with addiction, poverty, incarceration, physical or other disabilities or other issues that could prevent them from getting or keeping a job. As the name implies, OUTsideIN brings women who may be viewed as outsiders into a safe, structured environment where they can learn better workplace behaviors and attitudes.

Smith, whose husband is a general sessions judge for Obion County, would often talk with her husband about work. One of the common threads in those conversations was how much of a difference just having a job could make in a person’s life.

Smith says she’d had on her heart for quite a while a desire to do something to benefit others, even considering doing something with transitional housing. An article in the November 2010 issue of The Tennessee Magazine about the Blue Monarch long-term residential program for women and children actually helped set her on the path to create OUTsideIN.

“I read that article and believed that if Susan Binkley could step out and make a difference, then so could I,” Smith says. “My husband and I traveled to meet with her and gained lots of good information. That was in November 2010. God just took that leaning I had and honed it into the idea that it finally became.”

The main product created by the women who work at OUTsideIN is skirts made from donated T-shirts, dubbed T-skirts, though the line has been expanding to include scarves, totes, headbands and other products. OUTsideIN is actually a multibeneficial business. In addition to giving jobs to women who really need them and who learn valuable job and life skills through employment, the business upcycles and repurposes thousands of T-shirts that might have otherwise ended up in landfills into eco-friendly fashions. Every piece of the shirts is used: the fronts and backs for the main panels of the skirts and remnants for ruffles, headbands, even filling for dog beds. The seams are deliberately sewn inside-out.

“It’s a play on the company’s name and a reminder that the raw edges we all have can be useful,” Smith says.

Prior to the founding of OUTsideIN, Smith saw the likelihood of marginalized women getting jobs take a big hit when the local Goodyear plant closed. An area that was already suffering a double-digit unemployment rate suddenly added 1,900 highly skilled workers to the unemployment rolls. Smith recognized that women who had life struggles were at even more of a disadvantage in the job market.

Smith, who has a business degree and can sew, came upon the idea for OUTsideIN when she made a dress for her daughter using cast-off T-shirts. And it’s the making of products from T-shirts that she hopes will help the business grow so she can employ even more women.

“People buying skirts would help us more than anything,” she says. “We want to be self-sustaining, and more orders mean I could give my employees more hours and hire more women. Our concept is viable on a bigger scale. The raw material and the workforce are available.”

Right now, OUTsideIN employs two women, and just hearing them talk about how their lives have changed since starting there is inspiring.

“I was floundering and struggling with getting and staying sober,” says Kristi Smith, who isn’t related to LeEllen Smith. “No one would give me a chance, but LeEllen did. She opened her door to people like me, and there’s been a complete turnaround in my life. LeEllen has been a really positive influence on my life, helping me be a productive member of society again.”

LeEllen Smith says that having the employees actually sit down and work with mentors — Smith and volunteers — and having expectations placed on them to get work done is important for the women who work at OUTsideIN.

“You want to come to work. You don’t have to come to work,” says employee Lisa Salazar, who had a bad drinking problem and had lost everything before coming to OUTsideIN. “This job has meant everything to me. LeEllen believed in me when I didn’t believe in myself.”

Employees aren’t the only ones being changed and learning through the efforts of the business. “We thought our main objective would be to teach job skills,” Smith says, “but as we’ve gone along, we’ve realized that maybe the bigger issue is self-esteem.”

In addition to employees, OUTsideIN has provided an interesting and beneficial way for some women to fulfill community service requirements imposed by the court system.

Another important part of OUTsideIN’s mission — something Smith instills in employees — is giving back to the community. She’s seen employees beginning to do this on their own, and the business itself is active in this way. Recently, they started making cute hospital gowns for kids who are patients at Le Bonheur Children’s Hospital in Memphis, an idea that was spurred after a request was made on behalf of a little girl who’d been in the hospital long enough to start hating her hospital gown. 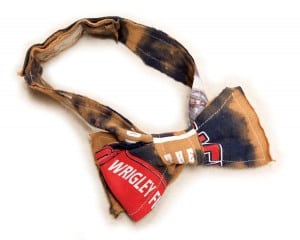 In addition to providing jobs for the chronically unemployed and creating American-made goods from raw materials that have a low financial value but that would have a high environmental cost for disposal, OUTsideIN provides yet another benefit, one reflected in the domain of its website, www.wearoneshareone.org. OUTsideIN partners with Kerin’s Kids, a ministry in Zambia that saves abandoned, orphaned, sick or neglected Zambian children. Each time OUTsideIN sells a wearable product, the company sends what is called a BlessDress, a vibrant little T-shirt dress, to a little girl in Zambia. The intent is to show these girls who have been living in tough situations that someone on the other side of the world cares about them.

It sounds like the best kind of win-win situation.

If you want to help support OUTsideIN’s mission, please visit the store on the square in Troy or purchase items from wearoneshareone.org. OUTsideIN is located at 113 W. Westbrook, Troy, TN 38260. Reach the store by phone at 731-446-8326.