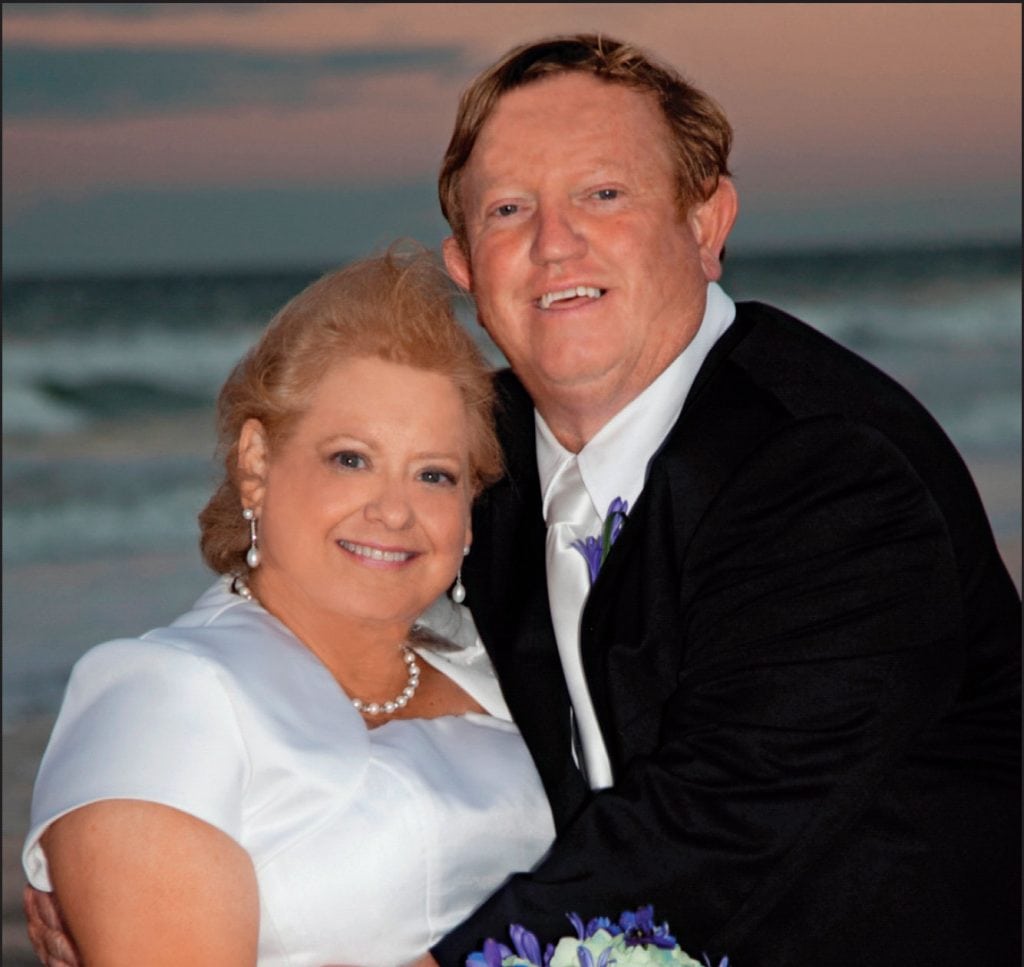 A personal journey into heart disease

“This is Amazon,” a man’s voice said on the other end of the phone. “I’m calling about your husband. He has been taken by ambu- lance to Saint Joseph’s Hospital — the main hospital.”

“What happened?” I asked, panic ripping through me.

“I don’t know any more than that,” the voice said. I’m sure he told me his name, but it was lost in a fog of fear. “Thank you,” was all I could think to say.

Until the call, it was an ordinary Tuesday afternoon. Our basset hounds, Crosby and Gertrude, were stretched out at my feet as my fingers did their familiar dance on the computer keys. My husband, Mike, was at his job in quality control for Amazon.

Now my mind imagined all manner of horrors.

In the past five years, Mike’s leg had been ripped open by a German shepherd bite. It required 22 staples and left a scar worthy of Frankenstein. Just before that, a doctor had accidently injected staph into his body while giving him a pain shot in that same leg. His leg doubled in size, turned a watermelon pink and was so hot that ice melted quickly when laid on the leg. It was days in the hospital before we learned he had a life-threatening infection. It was several more days before we found out if his leg could be saved. Ultimately, he would keep his leg, but he has permanent lymph node damage. His leg now swells every time he stands on it. He will be in pain the remainder of his life. Neither party took any responsibility, financial or otherwise.

Debra and Mike Isaacs were happily starting a new chapter of their lives. A heart attack threatened it all.

At the hospital, one receptionist led me to another until I finally arrived at the hospital’s Cath Lab. Mike was inside, undergoing a procedure. That was all I would know for two anxious hours, although there was a glimpse of good news already.

Amazon’s policy of having a nursing station in each warehouse had probably saved his life. When the nurse took Mike’s blood pressure, it was 200-plus over 100-plus. (Mike doesn’t remember the exact readings.) An ambulance had him at the hospital 10 minutes later. What you hear about fast action equating to better results is true.

Dr. Jonathan Waltman, a cardiologist in Lexington, Kentucky, where we live, appeared in the waiting room sometime later. He explained that Mike had suffered a heart attack at work. The cardiologist had put three stents into one artery, which had been 100-percent blocked.

When the doctor left, I went to WebMD where I found that a coronary stent is “a tube-shaped device placed in the coronary arteries that supply blood to the heart to keep the arteries open in the treatment of coronary heart disease. It is a procedure called percutaneous coronary intervention.”

The procedure was successful. Mike was recovering. I could see him soon.

What I didn’t know then was that this was just the beginning of what will be a life-altering journey. Panic, fear and uncertainty would become familiar guests. But after they left, other guests would arrive — gratitude, hope, contentment, joy. I had a decision to make. I recalled an old Cherokee story about such a choice and looked it up on the Internet:

An old Cherokee was teaching his grandson about life. “A fight is going on inside me,” he said to the boy.

“It is a terrible fight, and it is between two wolves. One is evil — he is anger, chole envy, sorry, regret, greed, arrogance, self-other pity, guilt, resentment, inferiority, lies, false pride, superiority and ego.” He continued, “The other is good — he is joy, peace, love, hope, serenity, humility, kindness, benevolence, empathy, generosity, truth, compassion and faith. The same fight is going on inside you — and inside every other person, too.”

The grandson thought about it for a minute and then asked his grandfather, “Which wolf will win?”

The old Cherokee simply replied, “The one you feed.”

Which would I feed? Fear about the future — uncertainty, concern about Mike’s lifespan, mounting medical bills, medical emergencies arriving without warning. Or would I choose contentment — joy that we had today together, a willingness to find a financial way to go on adventures we really wanted to, pleasure in simple, everyday things.

We booked our dream trip for a few months later. We went to Minnesota for a black bear study course with renowned wildlife biologist Dr. Lynn Rogers. We would learn more about these intelligent, curious creatures we had come to love on our trips to Tennessee’s Great Smoky Mountains. Before the heart attack, we had resigned ourselves to not going because of the expense. We looked at things differently now — not in a morbid, now-or-never way but in a positive, priorities-first way. We would scrimp elsewhere for what turned out to be the best adventure of our lives.

A heart attack strikes someone about every 43 seconds. It occurs when the blood flow that brings oxygen to the heart muscle is severely reduced or cut off completely. This happens because the arteries that supply the heart with blood can slowly narrow from a buildup of fat, cholesterol and other substances (plaque).

A heart attack strikes someone about every 43 seconds. It occurs when the blood flow that brings oxygen to the heart muscle is severely reduced or cut off completely. This happens because the arteries that supply the heart with blood can slowly narrow from a buildup of fat, cholesterol and other substances.

Often, there is permanent damage to the heart or even death. Cardiovascular events and cancer are the top two causes of death in America and increasingly in the remainder of the world.

We learned the seriousness of Mike’s condition a few days after his release from the hospital when we met Dr. Waltman for a follow-up visit.

Waltman told us that Mike had been fortunate — little damage to his heart — because of prompt action, but he also said that Mike has congestive heart failure, hyperlipidemia (high cholesterol), hypertension (high blood pressure) and arterial fibrillation (commonly called AFib), which is when the upper chamber of the heart sometimes flutters instead of beating properly. This irregular, often rapid, heart rate commonly causes poor blood flow.

Mike felt it days after the follow-up appointment. “I don’t have any strength,” he complained, which was quite unusual for my big, country-strong man. We learned later that his heart was only working at about 50 percent of capacity.

We were back at Dr. Waltman’s office the next day, and the doctor scheduled a procedure called an electrical cardioversion to restore regular rhythms by sending an electrical shock to the heart. Like you see on television, the doctors applied paddles conducting electrical current to his chest. He was back in regular rhythm … for less than a week.

The doctors scheduled a second electrical cardioversion, which had similar results. Mike was back to regular rhythm for a short time. Then another AFib episode. No more car-dioversions, the doctor said. The body can only handle a few.

We have now learned to live with AFib. One of the many medicines Mike takes helps control it but doesn’t work all the time. When he is in AFib, Mike cannot work. He has no energy. He applies for short-term leave, and we figure out how to pay or postpone the bills or some part of them. The occurrence of AFib is neither regular in timing nor length. You just never know. I have never been one for uncertainty. I like to plan the use of my time and money.

This is now an impossibility. No sorrow here, though. The new reality is better — more acceptance of what I can change (very little when it comes to heart disease) and cannot (most everything). It is out of my hands, in the hands of faith — God and Jesus in our case — and secondly in the hands of the experts. I’ve found that this is a much better place for big, scary things like congestive heart failure. Worrying does no good. It only robs you of what you have left: Imagine a thief taking most of your valuables and then you voluntarily handing over what he didn’t find.

I’m not perfect at this by any means. There are still periods of despair. We are thousands of dollars in debt. We have to ask to pay bills over time. We will owe the hospital forever. All of this is fact. If I mention it to Mike, he feels guilty. We both know it could have happened to either of us. Blame is not useful or fair. We kiss, make up and go on. And do the same thing when discouragement clouds my vision again.

Mike now takes 12 medications each day, and each is a tiny miracle. Most days Mike tells me he feels better now than before the heart attack.

Could the heart attack have been avoided? That thought still haunts me. I haven’t been able to vanquish it to the doesn’t-matter-now stack of questions, which is where it belongs. Mike was having warning signs — just not the classic chest pain. I didn’t know it but he had passed out several times. He was vomiting a lot, which I didn’t know either. I did know that he was always short of breath and his kisses were always too short.

The shortness of breath led us to have him undergo several tests. He had an echocardiogram (which uses sound waves to create pictures of your heart’s chambers, valves and walls and the blood vessels attached to your heart) and a nuclear cardiogram (an imaging test that uses special cameras and a radioactive substance called a tracer to create pictures of your heart). That doctor reported no sign of heart disease.

We relaxed about it. We shouldn’t have. The doctor was wrong. Two months later, Mike described the pain in his chest “like he was being smacked with brass knuckles.” He was having a heart attack. One artery was 100-percent blocked.

I am still mad about that, about paying doctors $3,000 to misdiagnose the tests, but, again, I have had to let it go. Bad test results are a fact of life. He is alive and happy. Many others have suffered so much worse, whether a wrong diagnosis, an act of nature like the hurricanes that have devastated so many of late or simply being somewhere at the wrong time like the innocents in shootings at Las Vegas, New York and so many schools.

We’ve changed as many things as we have been able in the past year and a half. We still have a long way to go. Although we know better, we still eat out at times. We haven’t banished the butter and margarine entirely. We should. We get more exercise, but not enough. We are a work in progress. Mostly, though, we are people of gratitude. We are thankful for Amazon’s foresight, for the doctors who care for Mike and for the medications that allow us to keep on keeping on. We are feeding the good wolf.