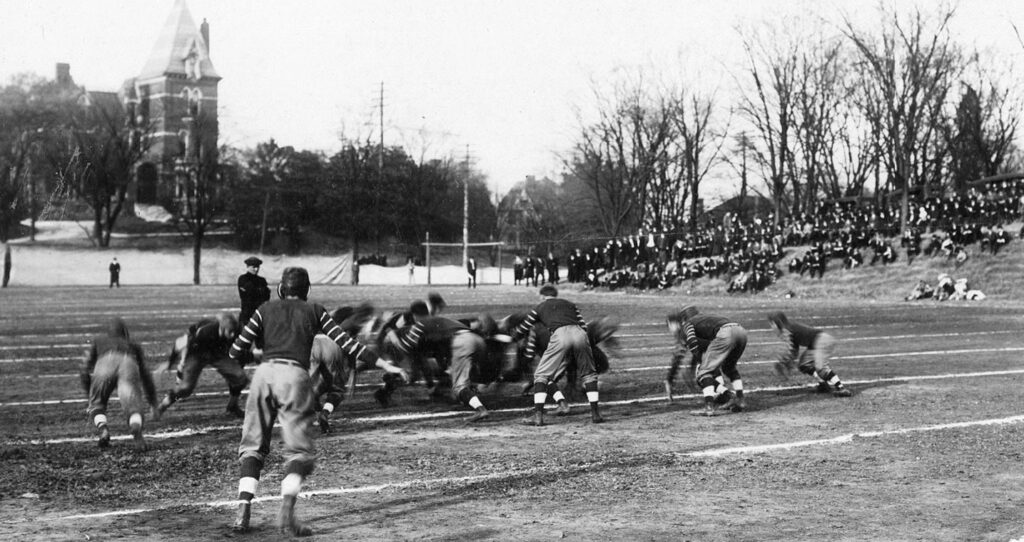 I interrupt this football season for the following historical tidbit: There was a time when people all over the South wanted the sport banned because it was killing too many young men.

College football started in the 1870s mainly in the schools that later formed the Ivy League. By 1887, football had spread to Tennessee so much that the Knoxville Journal published a long story explaining the rules of the game. “Eleven men are allowed on each side in a football match,” the article said. “Of those seven are rushers, two are half back, one quarterback and one full back.” This system may sound vaguely familiar, but the article went on to explain that the game routinely included something called a “dribble” (a form of a drop-kick) and continued without interruption for 45 minutes.

Football degraded in the 1890s to a sport that left many of its participants crippled, disfigured or worse. In 1897, a member of the Georgia football team died in a game against Virginia — an incident that nearly led the state of Georgia to ban football. Two weeks later, the New York World reported that at least eight people died playing the sport that season, and it listed more than 200 additional serious injuries that had occurred. “The list,” the World reported, “is a gory calendar of human anguish, an encyclopedia of broken bones, torn ligaments, fractured skulls, twisted necks, shredded muscles, broken ribs, gashed bodies, dislocated joints, backs and chests crushed in, scalps ripped off and jaws mashed.”

Criticism of football spread throughout the South the next year. Finally, on Oct. 30, 1898, the Knoxville Tribune published a full-page editorial calling for a ban on college football. “Year after year the list of victims grows,” the article stated, giving three different examples of serious injury leading to players’ deaths:

“Two opposing players running. A careless tackle by one caused the heads of the two to come violently together. Result, one man so seriously hurt that convulsion of the brain ensued, ending in death.”

“A scrimmage. Man holding ball went down with as many men stopping him as could get near enough to add their weight to the heap. Lower man did not raise when the mass disentangled itself. Examination showed that his neck had been broken, killing him instantly.

“Four players fell in a heap. In the struggle one lashed out with his foot, catching another on the head with the heel of his heavy shoe. Kicked man died three days later.”

In spite of all this, there were people who defended football. One Nashville Banner editorial argued that the sport gave young men a much-needed way to work off steam, pointing out that just about everything is dangerous. “If you set your body in active motion to catch a train, jump a fence, ride a horse, row a boat, shoot a gun, coast down a hill, wade a stream, climb a mountain, follow the hounds, that body thus set in motion frequently comes to grief,” the Banner said. “Let mothers erect a pile of white sand on a spreading sheet in a parlor and let their boys run their hands through it for sport. But then, oh horrors! They might get some of it in their eyes!”

Sports historians tell us that a major turning point occurred in 1905 when President Theodore Roosevelt invited several college football coaches to the White House and told them that if they didn’t clean up the sport, he would ban it. This meeting reportedly led to the introduction of the forward pass.

However, it would be wrong to claim that the forward pass immediately brought down the death count. In 1915, a University of Tennessee football player named Bennett Jared sustained serious injuries from a tackle he made in the game against Vanderbilt, and he was one of at least eight young men who died from injuries that season. Football would slowly progress into the sport we know today through more rule changes, the development of helmets and shoulder pads, and the influence of better coaching.

The phrase “better coaching” brings me back to the subject of this particular football season. But I digress.