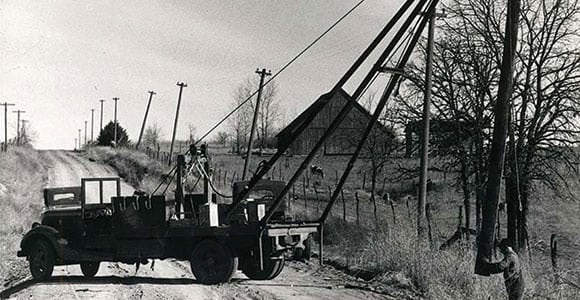 It’s always good to keep in mind where you started a journey, but it’s pretty important to see where you’re going. It’s a point proven by the difficulty of driving your vehicle while constantly looking in the rearview mirror. If you focus too much on what’s behind you, sooner or later you’re going to end up in the ditch.

For many electric co-ops in Tennessee, this year marks about 75 years of existence. That’s a long time to be around, whether you’re an individual or a company. For a company, it’s an impressive accomplishment to weather decade after decade, boom after bust, dealing with the normal challenges of running a business while introducing a new product.

For a lot of us in the industry, we’ve seen countless photographs and videos — grainy, black-and-white — of linemen and farmers together hoisting up poles by hand. Families looking up approvingly at electric lights illuminating their homes. Housewives looking, somewhat suspiciously, at appliances that promised to shorten their workdays. And workers in T-shirts posing in front of the REA trucks as the rural residents gathered around.

Inspiring? Without question. Over-used stories of glory days long past? Possibly. Electricity is a remarkable, awe-inspiring and life-altering invention. It’s ranked as the greatest engineering achievement of the 20th century. Yet, we’ve become so accustomed to the electronic conveniences we use every day that we often take it for granted.

The pioneers who founded our co-ops spent a good bit of time explaining what electricity could — and couldn’t — do. Despite their best efforts to communicate that electricity wasn’t dangerous when properly used and respected, more than a few people were scared to death of it — best exemplified by Maggie Smith’s fictional Dowager Countess in “Downton Abbey:” “I couldn’t have electricity in the house. I wouldn’t sleep a wink. All those vapors seeping about.”

A good lesson to take from a glance in the rearview mirror — how difficult it was in those early years to explain the benefits and dangers of electricity as we built this system that transformed our nation. Many electric co-op offices still have auditoriums with demonstration kitchens on stage where they unveiled “new” electric appliances.

The application of that lesson for today? The need for electricity hasn’t changed, but the educational challenges surrounding its use remain.

Which is more difficult — explaining to the Countess that electricity doesn’t emit vapors or explaining how advanced metering infrastructure provides demand response tools that can lower your energy use and your co-op’s peak demand?

In the early days, electric co-ops mostly built substations and miles and miles of new lines. The challenges for today’s cooperatives are different and more complex: cybersecurity, distributed generation, solar panels, LED lighting and ever-increasing loads. Add to that list dozens of other innovations that require constant planning and assessment. As the technology becomes increasingly complex, it also requires more education of electricity users.

What we should do less of is keep looking into the past. If we do, we become the epitome of what Bruce Springsteen sang about: “… I hope when I get old I don’t sit around thinking about it, but I probably will. Yeah, just sitting back trying to recapture a little of the glory of …”

Our “Glory Days” aren’t in the past; we’re creating new ones every day. Even with an occasional glance to the rear, our cooperatives are firmly focused on the future.