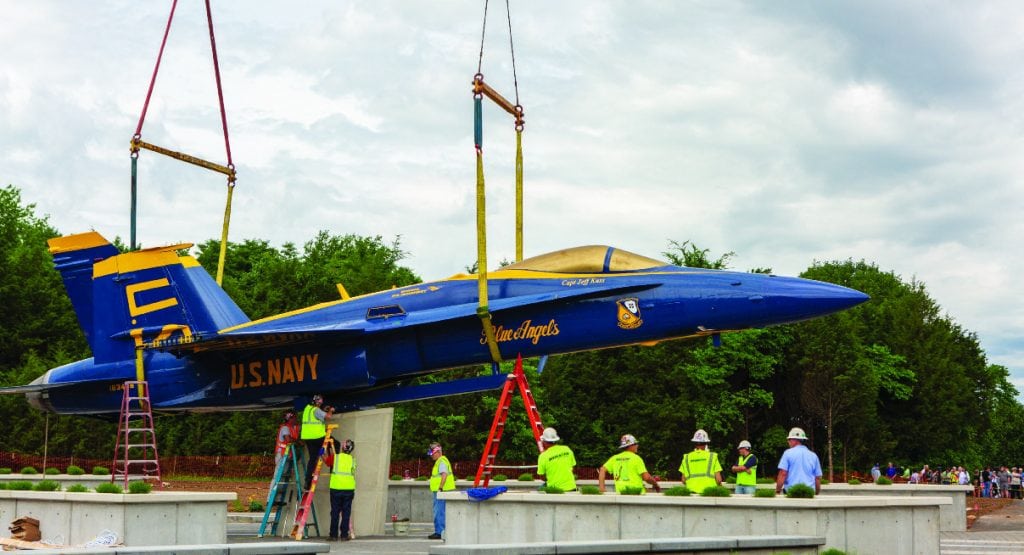 There is nothing quite like watching the U.S. Navy Blue Angels in flight. The speed, precision and proximity in which the planes fly together are all thrilling — things the average person can’t quite grasp as being real. The demonstration squadron travels to dozens of shows across the country each year during the performance season from March through November. One of the events they frequent is the Great Tennessee Air Show in Smyrna. It was on the eve of that show in June 2016 that the pilot of the No. 6 plane, U.S. Marine Capt. Jeff Kuss, crashed during a practice run and lost his life.

Immediately following the tragic crash on June 2, an impromptu vigil was organized by citizens and held in the Lee Victory Recreation Park. In the days following, citizens began reaching out to suggest a memorial be constructed to honor Capt. Kuss. Seven days later, Town Manager Harry Gill put together a committee of Town of Smyrna employees as well as longtime community members and leaders. Simultaneously, the town took to social media to solicit ideas of local citizens regarding what they would like to see in a memorial. It was important to Smyrna and committee members that citizens feel like this was their memorial, according to Amber Hobbs, a staffer in the town’s legal department who worked on the project.

“We then brought the list of those very ideas before the committee and decided as a group which idea best suited the type of memorial that would honor Capt. Kuss’ sacrifice,” Hobbs says.

Two years to the day after Gill established the committee to work on the project, the Town of Smyrna held the dedication of the new Capt. Jeff Kuss USMC Memorial at Lee Victory Memorial Park, directly across from the Smyrna Airport’s runways. Multiple sidewalks connect the memorial to the existing greenway that runs through the park. The memorial’s centerpiece is an F/A-18C Hornet, similar to the plane Kuss was flying at the time of his tragic death. The plane on display was loaned to the Town of Smyrna by the National Naval Aviation Museum located on Naval Air Station Pensacola in Florida, home base of the Blue Angels. The memorial park also features hundreds of engraved pavers as well as steel cutouts displayed under each planter that reflect the military’s core values.

“It is our understanding that there is no other memorial specifically honoring a fallen Blue Angels pilot in all of the United States — and definitely not one of this magnitude,” Hobbs says.

While the town and committee guided the efforts to bring this memorial to fruition, it was made reality by a lot of people. To date, the community has raised more than $1.3 million toward this worthy project. These funds came from more than 50 local business sponsors and 300 online and walk-in donors, including citizens who have purchased pavers to be personalized and incorporated into the memorial. This doesn’t even begin to count those who have sent in $5 or $10 or the children who have put change in jars at town events.

“This was a special day in history for the Town of Smyrna and its people as well as for the Kuss family,” says Smyrna Mayor Mary Esther Reed of the memorial’s dedication.

“Raising money for the $1.4 million memorial was a grassroots effort that began in Smyrna and Rutherford County, then expanded throughout the state and culminated with donations from across the country.”

Hobbs says they’ve also received many emails from citizens who did not have the money to contribute but who asked if they could help in other ways just to be part of seeing this project completed.

“This memorial truly would not have been possible without each and every one of these community members,” she says.

Middle Tennessee Electric Membership Corporation is among the local businesses that got involved with the project. In fact, MTEMC was involved very quickly after the accident because of the related power outages at the crash site.

“MTEMC has also been involved from the early stages of the memorial’s development, particularly around infrastructure considerations at and around the property,” says President/CEO Chris Jones. “In support of the effort, we absorbed associated costs related to power and moving facilities to clear the view path. Our people — from board to staff — were eager to jump in and assist however we could.”

“There is a sense of reverence, patriotism and community in this effort. So, it was important to us from the start,” Jones says. “But we also clearly understood how this tragedy brought together the Smyrna community. Mayor Reed’s leadership focused that community support toward this memorial, and we proudly stand with her and the community — where a number of our team members call home. We are very proud of the Smyrna community for this wonderful gesture that will always stand in tribute to Capt. Kuss.”

John R. Black, executive director of the Smyrna/Rutherford County Airport Authority, says the memorial is a lasting reminder of the community’s caring and combined efforts.

“This has been an incredible project that reinforces what a great community we live in,” Black says. “From that tragic day in June 2016 until now, so many people have come together to make this memorial — which will be part of this community for generations to come — a reality.”

The Blue Angels have been kept informed of each step in the process and have expressed support and gratitude for the honor bestowed on one of their own. Multiple representatives of the Blue Angels, alumni and current, including former commanding officers and teammates of Capt. Kuss, were due to attend the dedication (which had not yet occurred as of this writing). Also planning to attend were representatives of the Blue Angels Foundation and the Blue Angels Association. Capt. Kuss’ former Marine Corps squadron, Marine Fighter Attack Squadron 312 (VMFA-312) (“Checkerboards”), was set to bring four F/A-18C Hornets from Beaufort, South Carolina, to perform the missing man formation in Capt. Kuss’ honor.

“We are truly grateful for the outpouring of support from each and every person and organization that has gotten behind this worthy tribute and even more grateful to have Capt. Kuss’ mother, father, brother and wife in attendance for dedication events so we can show them how much this community cares for them and the sacrifice Capt. Kuss made on June 2, 2016,” Hobbs says.