Beekeeping benefactors share the buzz on these prolific pollinators

Everyone probably dreams of pursuing their passions after retirement, and that’s exactly what Dunlap resident Ken Lee has done. After a career in banking in Dallas, he moved to Tennessee. About seven years ago, he saw an article in the newspaper and attended a beekeeping class. The class then led him to the mentorship program provided by the Tennessee Valley Beekeepers Association, a chapter of the Tennessee Beekeepers Association (TVBA), and eventually resulted in his maintaining six honeybee hives and taking on the position of TVBA president.

“I’ve always been fascinated with sustainability,” says Lee, who is also a Master Gardener. “I’m fascinated by how industrious honeybees are.”

Despite bees’ industrious natures, they have been facing distressing declines in recent years due to issues such as loss of habitat, use of pesticides and predators such as Varroa destructor mites. This isn’t just a problem for the bees. It’s estimated that as much as one-third of the fruits, vegetables and nuts we eat only grow because these crops are pollinated by bees, according to the American Beekeeping Federation.

“One of the big problems impacting beekeeping today is the flood of low-cost adulterated honey products in almost every food store, market and shop, especially in Tennessee,” Kerr says. “A beekeeper producing really good local honey has production costs that cannot compete.”

Even so, it’s important that efforts be made to save honeybee populations.

According to the Bee Informed Partnership, a national collaboration of research labs and universities working to better understand the sharp declines in the honeybee population, for the period of 2017–2018, Tennessee suffered a 74.7 percent annual loss, the second highest loss rate in the country. 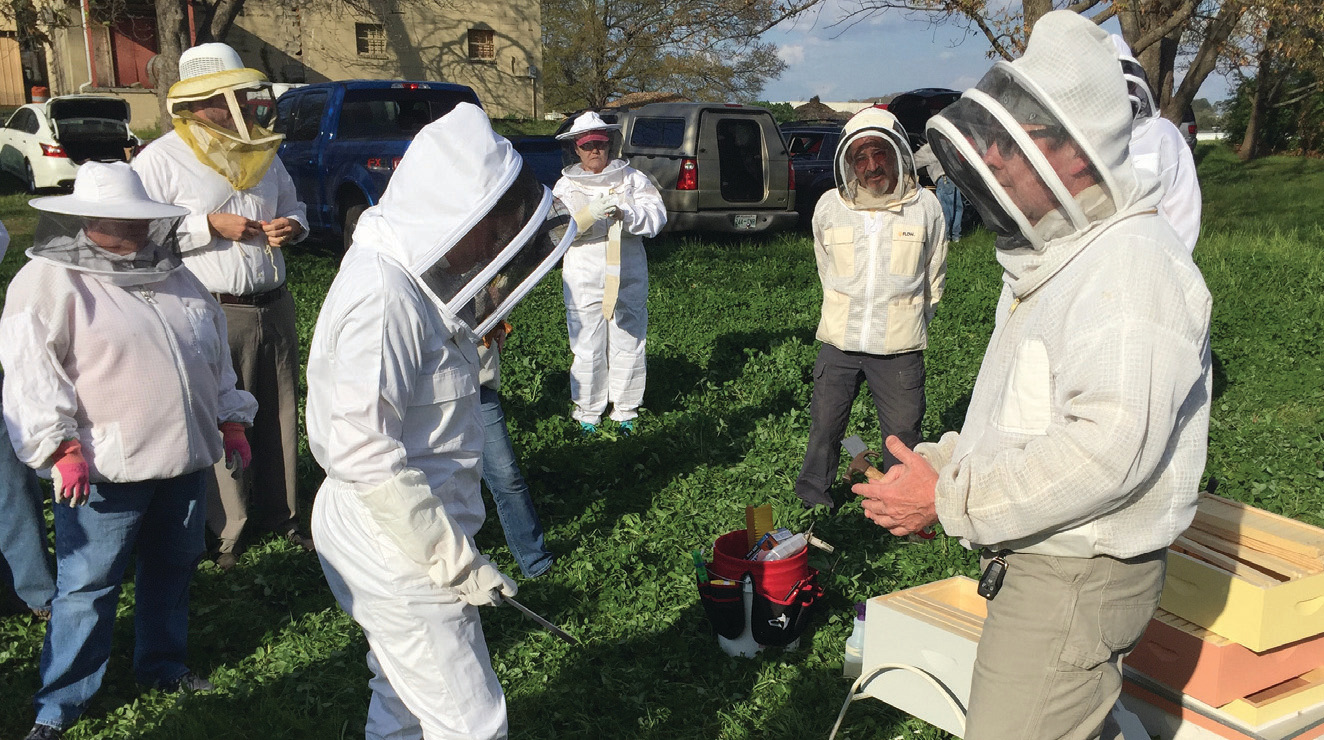 Beekeeper Betsey Spencer “reads” a frame to determine the health of the hive. She will write notes on the side of the hive to track its status. 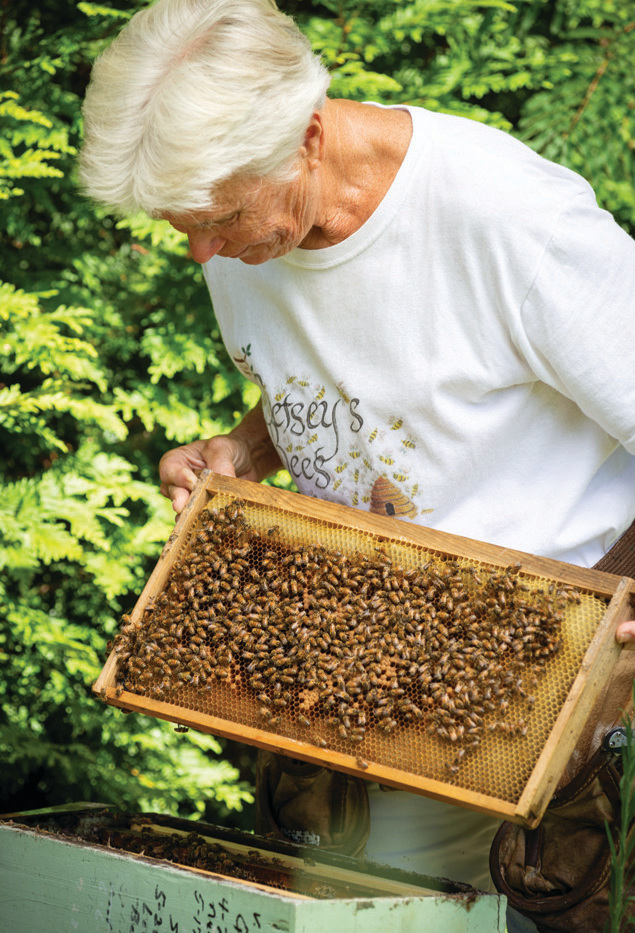 Students are introduced to beekeeping techniques as part of the Tennessee Valley Beekeepers Association’s mentorship program.

“Anything over 20 percent is unsustainable,” says Lee, a member of Sequachee Valley Electric Cooperative.

That’s why it’s important for everyone to take measures to help not only the recovery of honeybee populations but also benefit other pollinators like monarch butterflies and other native species of bees.

So maybe you would like to help feed the world and bump up the pollinator population. Or maybe you’re just in it for the honey (no judgement). Here are the top 10 pieces of advice to kick off your beekeeping venture on the right wing:

1. Answer the question: “Can I have bees where I live?”

Make sure local regulations allow you to have bees. If you have an acre of land, this should be able to support a hive or two. Honeybees forage up to five miles from their home base, so they should do well if you have plenty of flowering plants, water and sunshine within your vicinity.

2. Make a beeline to learn.

Read some books or visit some sites like honeybeesuite.com. Try “Simple, Smart Beekeeping” by Kirsten Shoshanna Traynor or something gorgeous and moving like the memoir “A Book of Bees” by Sue Hubbell. Get inspired by these fascinating creatures. Bee biology, Varroa mites, flowers, beekeeping jargon, pollination — knowledge yields the wherewithal to keep your hives alive.

Local beekeeping stores and clubs often offer classes that run January through March and culminate in your own package of 12,000-plus bees for kicking off your first hive.

This is where the bulk of your learning will happen. A local beekeeping club should be able to pair you with an experienced keeper who should be willing to dive into your hives with you. An hour with such a person is worth its weight in golden honey.

Beekeeping is a process. Put aside grand visions of sharing your vast honey harvest with friends and concentrate on learning. You will lose hives. You will make mistakes. But you will also become a better beekeeper.

Don’t be greedy; remember that bees need honey, too! The first year or two, you may need to let them have it all until they are better established.

Two hives is better than one. If one hive is failing and the other thriving, you can steal brood or food from the strong hive to supplement the weaker one.

Learn by observing your new pets. See their pollen baskets, watch their orientation flights, pick out the queen (she can be hard to locate, like a game of “Where’s Waldo?”) and her entourage. Reverence! 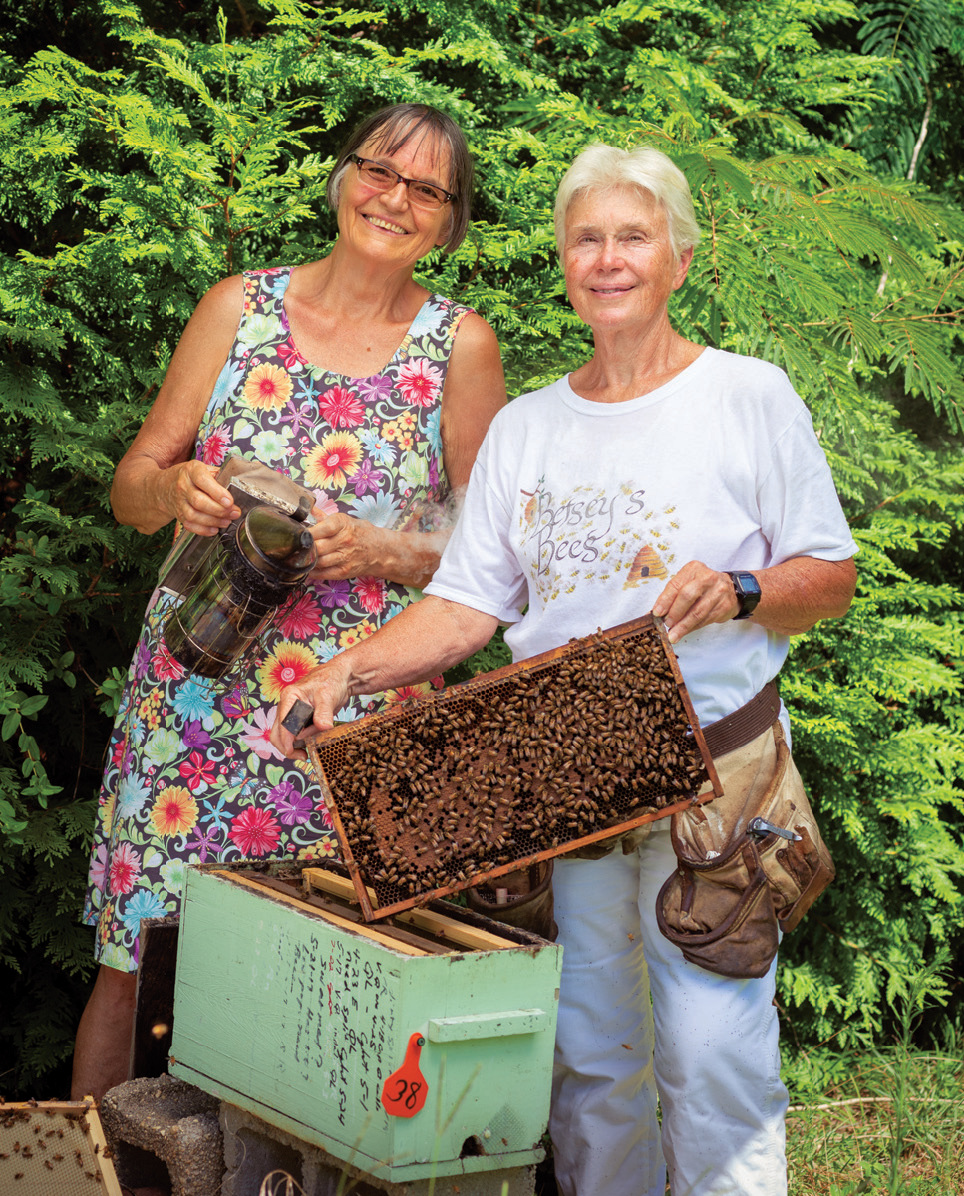 Beekeeping mentee Katie Verna, left, holds a smoker while mentor Betsey Spencer shows off a frame of brood and adult bees over an open hive.

Inspect your hives every seven to 10 days in order to head off disease and maintain a healthy hive. Much more often, and your interference becomes a detriment to the bees’ work. 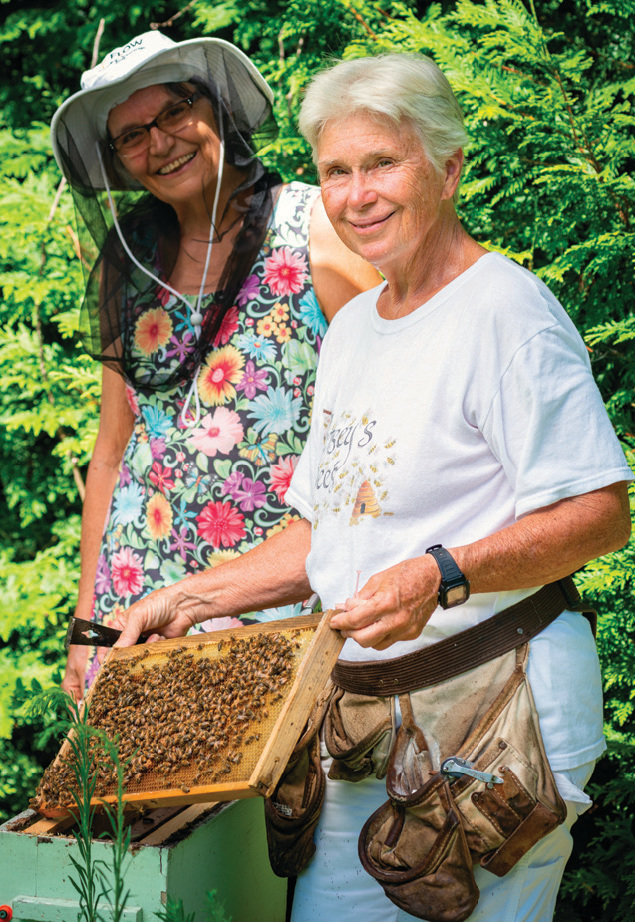 Katie Verna, left, wears a veiled hat while Betsey Spencer shows off a frame of bees from an open hive.

Stings are unavoidable when working with bees. Be aware of any allergies you or your family may have, and be ready for a sting. But take heart that honeybees are generally docile. Plus, you can minimize stings with protective gear and by working carefully and calmly around bees (most stings occur when keepers unknowingly smash a bee). If stung, you can use an extractor kit to quickly remove venom from the wound. Or, in a pinch, even a small stick can be used to scrape the stinger from the sting site.

Lee uses the knowledge he’s amassed to talk to various groups about bees, but being an advocate doesn’t require you to put on your public speaking hat or become a beekeeper yourself.

Perhaps managing bees isn’t for you — space, money, time and allergies can all get in the way. Luckily, there are plenty of other ways to be there for the bees.

In the same ways that you look to feed yourself and your family healthy food, people need to grow nutritious food for bees. But we’re not. According to the website honeybeesuite.com, farmers grow crops that are cut at 10 percent bloom to maximize protein content for livestock. Herbicides wipe out weeds along highways and drainages. And though invasive species provide forage briefly, they then wipe out other native species that would have provided a longer bloom season.

Grow your own diverse, pesticide- and herbicide-free plants that bloom year-round. (Weeds count, too!) Put out shallow water stations with stones for bee landing spots. Also, consider lobbying legislators and educating others to change laws and habits to be more amenable to bees.

From STEM programs for children and “teaching apiaries” created by beekeeping organizations to state fair exhibits and 4-H programs, education is key to a sound future for bees.

There’s no greater win-win than a local honey purchase at a farmers market. Support beekeepers’ efforts and feed your sweet tooth all in one go!

If nothing else, the more you learn about bees, the more respect you will have for this tiny insect. The worker honeybees (females who care for the hive) live six to eight weeks and often die because their wings wear out. According to honey.com, these ladies fly 55,000 miles to produce one pound of delicious honey filled with nutrients, antioxidants and the ability to hasten healing and keep coughs at bay. Given that, it’s the least we can do to be good stewards of the environment on the bees’ behalf.

Tara Verna is a beekeeper and creative director for Carolina Country magazine. Trish Milburn is an author and freelance journalist based in Florida. 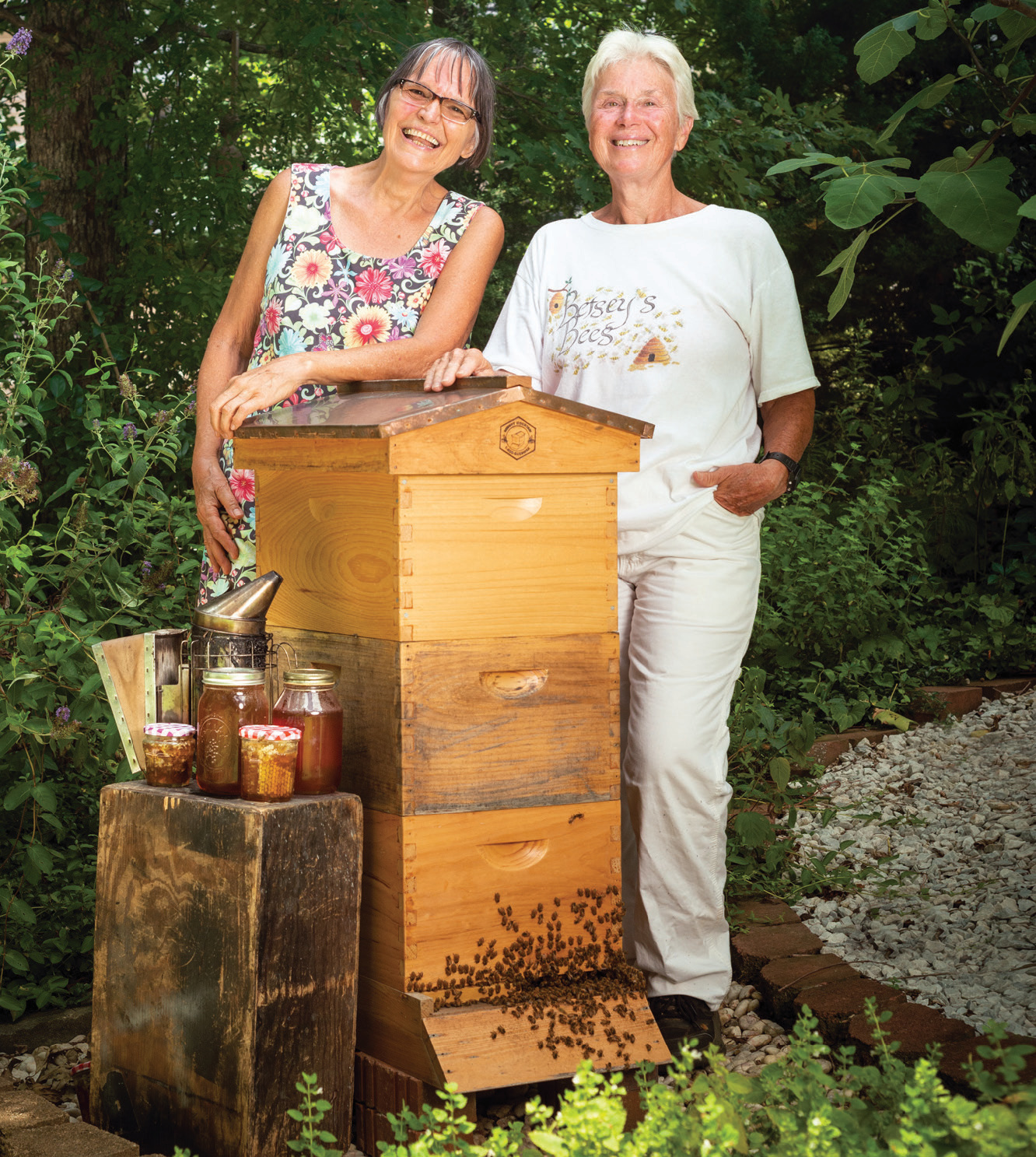 Bees mass near the entrance/exit to their hive while Katie, left and Betsey remain unafraid.