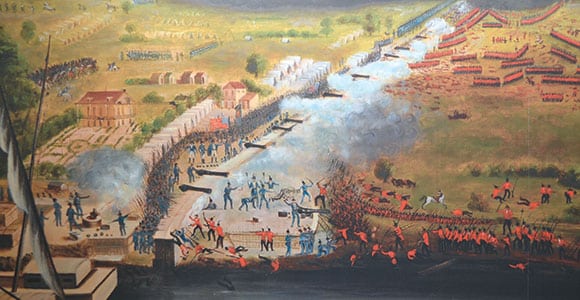 A few years ago, I found a brochure for a New Orleans museum that helped me understand the importance of the Battle of New Orleans.

“In the waning days of the War of 1812,” began the brochure for the Historic New Orleans collection, “Andrew Jackson shocked the world by leading a ragtag force of local and state militia, regular U.S. troops, free men of color, Choctaw Indians and Baratarian pirates to a crushing victory of an invading army of proud, tested, elite British soldiers determined to seize New Orleans.”

The 199th anniversary of this battle is a great time to look back on this amazing event in American — and Tennessee — history.

In the fall of 1814, 15,000 British troops and 50 ships invaded Louisiana. These were experienced soldiers who had previously fought Napoleon. They were so confident that their commander, Adm. Alexander Cochrane, said he intended to give the Americans “a complete drubbing.”

Since practically all goods produced west of the Appalachian Mountains had to pass through New Orleans to get to open seas, this was a major threat to American economic independence.

In the months leading up to this, Gen. Andrew Jackson’s army of state militias and regular U.S. troops had fought battles against Creek Indians in present-day Alabama and against the Spanish in present-day Florida. With the British coming, the U.S. government ordered Jackson’s army to defend New Orleans.

Jackson’s army marched down the Natchez Trace, then through New Orleans. After a brief engagement with the British on Dec. 23, Jackson’s men set up at a sugar plantation called Chalmette, about five miles south of the city. Jackson chose a narrow stretch of land, with the Mississippi River on one side and a swamp on the other. He ordered his men to dig a ditch and build a rampart behind it and to set up eight artillery batteries for defense. They waited for the main British attack, which came on Jan. 8, 1815.

On paper, this looked like a mismatch for the British.

Jackson’s army was outnumbered three to one. About 1,300 of his men were militia from Tennessee, many of whom had fought at Horseshoe Bend. He had a few hundred soldiers from the U.S. Army. He had Louisiana militiamen, many of whom spoke French and Spanish but not English. He had 62 Choctaw Indians. He had a group of privateers from Louisiana known as Baratarians.

Jackson also had nearly 500 free black men fighting for him at New Orleans. In fact, this was the largest use of free black men in an American battle until the Civil War.

The British had more soldiers, more experienced soldiers and better-trained soldiers. When the British charged into the American lines on Jan. 8, they probably assumed that they would defeat the Americans with ease. But the British leader, Gen. Edward Packenham, made terrible mistakes that day.

For instance, at the beginning of the day, a British force crossed the Mississippi River intending to march upstream and fire guns across the river at the American lines. But they didn’t realize how strong the river current was. When they set off to cross the river, they drifted far downstream. The crossing took hours longer than it was supposed to; by the time they got across the river from Chalmette, the battle was over.

Finally, the ladders and bases the British soldiers had intended to use to climb and invade the American ramparts never got to the front lines. British soldiers who advanced close to the lines found that they had no way of climbing the ramparts. Hundreds died standing in formation, waiting for the ladders that never came.

“Instead of an attack that is pouring over the American breastworks, there is a mass of humanity that comes to a grinding halt in front of it and in front of the cannon and muskets and rifles,” explains historian Tim Pickles.

Andrew Jackson’s army crushed the British in the Battle of New Orleans. It was one of the most lopsided battles in history. More than 2,000 British soldiers were killed, wounded, captured or missing. General Packenham was also killed, shot several times on the battlefield. The Americans only lost about 20 men in the main battle.

In spite of this, some historians believe that the Battle of New Orleans did change American history. The lopsided nature of the battle may have ensured that the British would never fight a war against the United States again.

The battle made Jackson a national hero. His leadership in battle had a lot to do with why he was elected president in 1828.

For many years, Jan. 8 was celebrated as a national holiday in the United States. I’m told they still acknowledge the day in Louisiana.

Any current account of the Battle of New Orleans has to mention that the site of the battle (now an industrial suburb called Chalmette) was extensively flooded by Hurricane Katina in 2005. Chalmette has been through a lot; its population has still not — and may never — returned to its pre-Katrina levels. However, the Chalmette National Battlefield remains a wonderful place to visit, and the people at Rocky and Carlos Restaurant down the street were as hospitable as they could be.