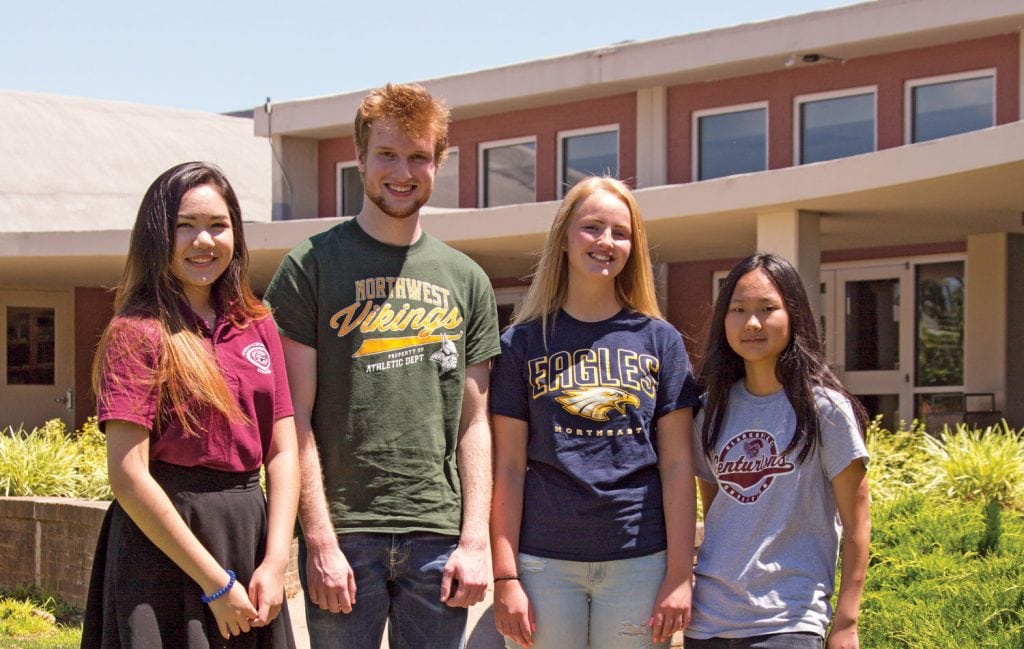 From left, students Peach Virojchalerm from Thailand, Greg Riquet from France, Josie Monnike from Denmark and May Park from South Korea attended school in the U.S. this year, living with families in Clarksville.
Share
Facebook Twitter LinkedIn Pinterest Email

Imagine sitting in front of the grandeur of the Eiffel Tower. Imagine having the opportunity to live in France for months or even a year to learn the language, immersing yourself in the sights and culture and getting to know its people. Now imagine being able to do that as a high school student when you’re on the verge of launching into your life as an adult and before the responsibilities of adulthood perhaps prevent you from having that extraordinary experience.

That’s exactly what Alexa Diehl of Brentwood did during the first semester of her junior year of high school in 2009, living with a host family and attending school in Toulouse, France. Diehl was part of a student exchange program called AFS-USA, which, for 65 years, has been sending students to a vast array of countries and bringing students from other nations to the United States.

“I hoped to learn about the culture and learn the language,” says Diehl, who graduated from college in May with a degree in international business and finance. “It was well beyond my expectations. I learned so much about the culture and the people and by the end was wishing I had stayed for the full year. There were a lot of people who were skeptical of Americans when I first arrived, but by the end of my stay, they were some of the people hosting my going-away party and telling me how much I would be missed. As clichéd as it sounds, I really learned that you cannot judge a book by its cover.”

AFS’s intercultural programs, formerly the American Field Service, were founded after the outbreak of World War I by Americans living in Paris who volunteered as ambulance drivers to remove the wounded from battlefields. After seeing firsthand the devastation brought about by war, they decided to start a program by which people from different countries and cultures could meet, learn together and better understand each other. It was combat of a different kind — trying to eradicate the fact that people often hate what they don’t understand. The work continued after World War II. In 1947, AFS sent 52 students from countries formerly at war to learn through international exchanges.

Today, AFS-USA continues its mission of working “toward a more just and peaceful world by providing international and intercultural learning experiences to individuals, families, schools and communities through a global volunteer partnership” by sending approximately 1,400 American students to other countries and bringing about 2,500 foreign students to the United States each year. All of these exchanges are made possible by more than 6,000 volunteers nationwide serving as everything from host families to coordinators to support staff.

One of those volunteers is Barbara Wills of Clarksville, a retired school counselor who is the current public relations chair for the AFS-USA area that includes Tennessee. Wills has been involved with AFS in various capacities for 30 years. She and her husband, Stanley, have hosted many students. Wills says she loves getting to know these “remarkable” kids and that AFS is a great way to promote peace.

“We’ve never sent a student back to his or her country who had anything negative to say about the U.S.,” she says. “They are great ambassadors for us.”

Becky Heywood of Nashville is the volunteer and sending coordinator for the area team. She’s been involved with AFS since high school when she was in a club that helped the exchange student who was studying at her school. During the intervening 29 years, she’s stayed involved with the organization. Talking to her about the students from Tennessee currently on exchange or those from other countries studying in Tennessee begins to give a sense of the wide reach of AFS.

Students from towns such as Mt. Juliet, Cookeville, McKenzie and Knoxville are studying in far-flung points of the globe like India, Thailand, Argentina, Turkey and China. And students from Bangladesh, Switzerland, Iceland, Chile, Israel, Norway and several other countries are learning more about the United States — and Tennessee in particular — by studying alongside their American classmates in Tennessee’s high schools.

“It gives them a global perspective and knowledge that few of their peers have,” Heywood says. “It helps their maturity and helps them be ready for the next step.”

Angele Fauchet of Brentwood, who studied in Germany during the 2013-2014 school year, agrees and has some words of encouragement for parents who might be nervous about sending their children to another country.
“Parents: It is probably terrifying to let your children venture so far from your reach,” she says. “You will probably wonder if they are safe, if they are happy, how much they miss home. But an exchange will allow them to discover themselves, and it will teach them how to manage without you being directly by their sides. Ultimately, you will find that your children will have grown more mature when they return to you, and college will not seem as intimidating.”

Fauchet is very honest about her time — the highs as well as the lows — as an exchange student. What’s amazing is that she came out of the experience with an overall positive impression despite a medical emergency that no one expected.

“In hindsight, I believe the hardest challenge I faced was my stubborn expectation that I had to immediately know and understand everything,” she said. “This could be said for language difficulties as well as cultural differences. I found myself still feeling frustrated over setbacks that had happened and at times had trouble forgiving myself for not being ‘perfect.’ I suppose I had a subconscious idea that if I was not perfect, my exchange could not be, either.

“While difficult to pinpoint, the most fun I had was probably during the class trip at the end of the year to Berchtesgaden, Bavaria, and Salzburg, Austria. There was a strong sense of camaraderie among my classmates and me, and the class trip magnified that.

“The most unexpected incident was breaking my jaw. My host family, home family and I did not anticipate that sort of injury. I will be forever grateful that my host family supported me during the entire process and allowed me to continue my exchange year with them. The most rewarding aspect of a year abroad is looking back and finally being able to understand that regardless of how difficult things might get, you will get through them and learn from them.”

While the focus may be on the students and exposing them to other peoples and cultures, the host families gain a lot from the experience as well. Jennifer Poelking of Adams and her husband, who is stationed at Fort Campbell, will be hosting their 12th student beginning in August. Prior to this, they’ve hosted students from Japan, Sweden, Norway, Spain, Germany, Switzerland and Italy. Poelking says she wanted diversity in their home to expose her daughters to people from different countries and learn from other cultures.

Because Poelking also works full time and has three daughters — one still a baby — her family hosts female students, and Poelking requests girls who have similar interests to her family — things like running and horseback-riding.

“It enriches our family so much,” the Cumberland Electric Membership Corporation member says. “It’s not like having a stranger in your home.”

Even after the hosted students go home, they come back for visits because they’ve really become part of the family, Poelking says. One of the girls plans to come for a visit so she can meet Poelking’s new baby.

The differences in language and culture can sometimes even offer up some funny moments. Poelking says some students were really excited to ride the big yellow school bus until they actually experienced it. One was confused by the phrase “tossing your cookies” when Poelking was talking about her baby girl spitting up. And the wide variety of goods at a store like Walmart sometimes overwhelms the students. They take pictures because while, for instance, they might have a handful of cereal options in the market back home, we have dozens here.

AFS offers year-long, semester and summer programs abroad for students ages 15-18. More than $3 million in financial aid and scholarships is available to students interested in studying in another country.

“My choice to study abroad was one of the scariest but best decisions I have ever made in my life,” Diehl says. “I would not be who I am today if I had not decided to study abroad. Since then I have studied abroad a second time, and that, too, changed my life. There is so much out there to explore, and if you don’t try it now, you might not get the chance again.”

AFS-USA has a tremendous amount of information on its website for those interested in studying in another country, hosting an exchange student or volunteering in a variety of other ways. The organization is always in need of more volunteers. Host families go through an extensive screening process to help guarantee the safety of everyone involved, and AFS-USA is regulated by the U.S. State Department. U.S. students can go to one of 50 countries while students from 90 countries can study in the U.S. To learn more about AFS and its study abroad and volunteer opportunities, visit www.afsusa.org.

The Tennessee Magazine’s 2022 Guide to the Fair & Festival Season