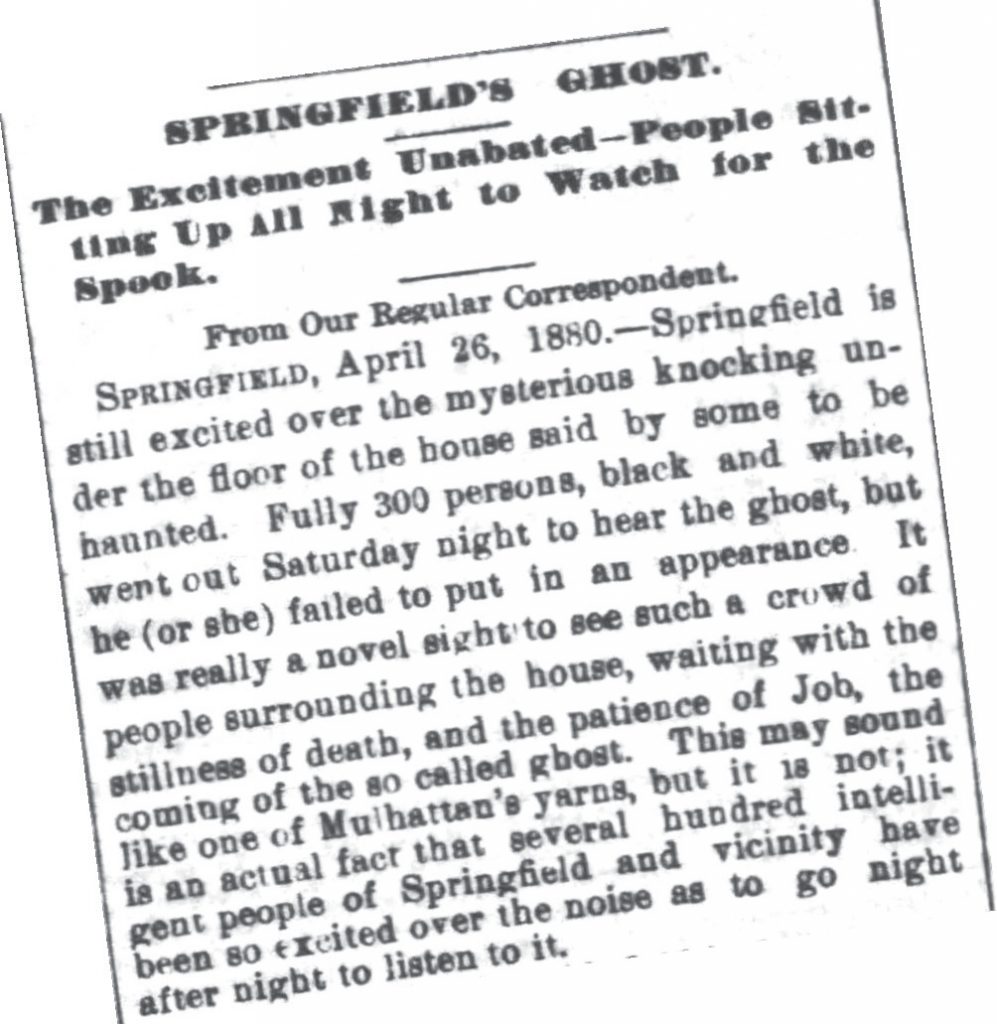 An article in the April 28, 1880, Nashville Daily American describes an alleged haunting in Springfield that compelled “several hundred intelligent people … to go night after night to listen to it.”
Share
Facebook Twitter LinkedIn Pinterest Email 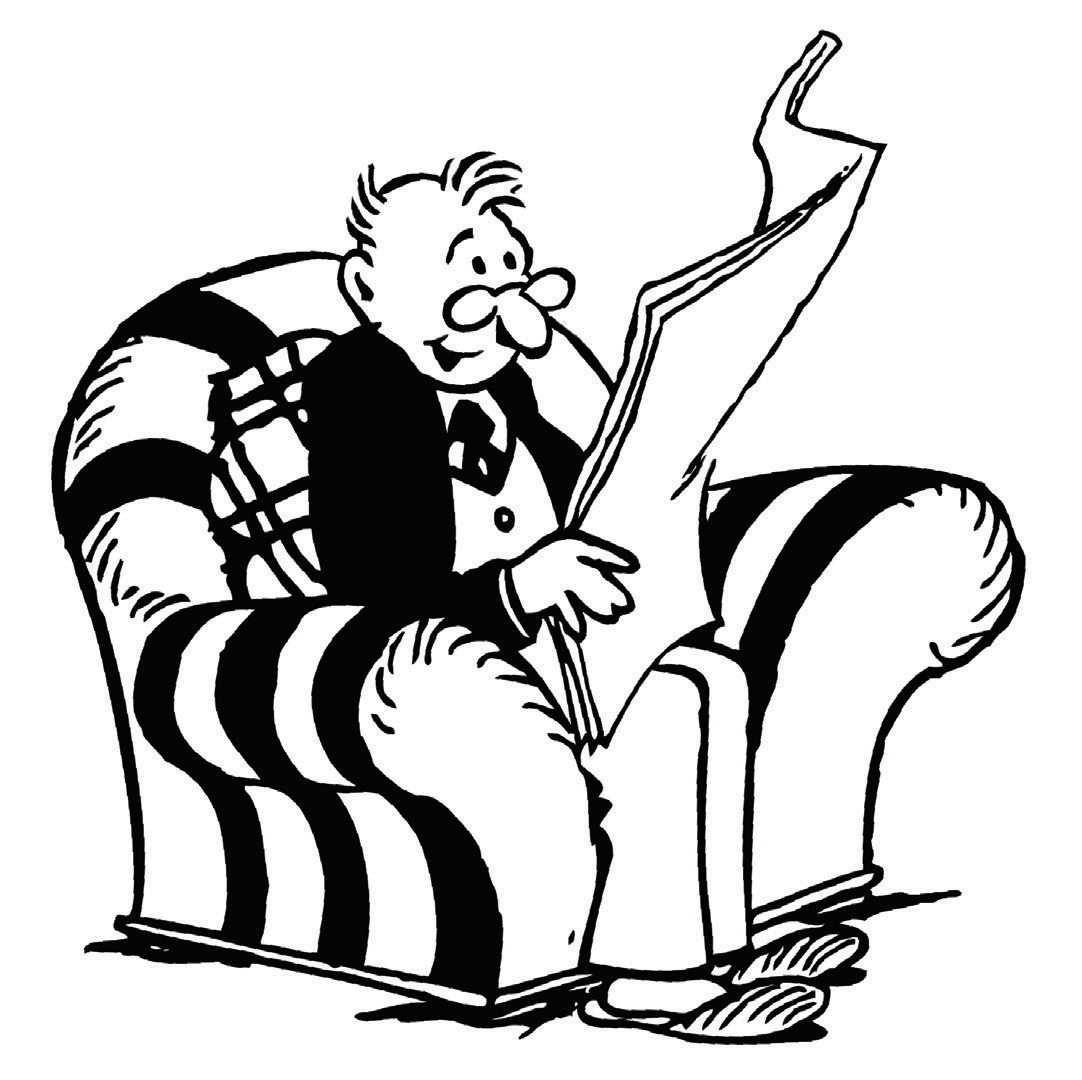 The best newspaper clippings in Tennessee history didn’t announce monumental events. They contain comments about day-to-day occurences that give us remarkable insight about the world and the way people viewed it.

Some of these clippings make us scratch our heads or even chuckle.

In November 1806, 11 adults were migrating west on the Cumberland Plateau when a party of American Indians surprised them. All seven of the men in the group fled, leaving the women to fend for themselves. It turned out that the Native Americans meant the women no harm; they “shook hands with the women and told them they would not be hurt.” Eventually, three of seven men who had run off made their way back to the main group, but four of them did not stop “till they reached the settlement” (of Nashville). No word on how these terrified men were treated by the general population after the news of their cowardice was published in newspapers such as the Nov. 19 Knoxville Gazette.

The July 24, 1820, Pitts-burgh Weekly Gazette contained an announcement about the creation of the town of Memphis. The location of the new town was said to be “on the east bank of the Mississippi, 224 miles below the mouth of the Ohio.” Its longitude? 13 degrees west “from Washington” — not 90 degrees west of Greenwich, England. (This reminds us just how much Americans hated the British after the War of 1812.)

Most of Tennessee’s early roads were maintained by turnpike companies that levied different passage fees for humans, horses and livestock. On Feb. 15, 1826, the Knoxville Enquirer reported that in the previous three months, 63,036 hogs had passed by the turnpike at the road through the Cumberland Gap.

What is it about Robertson County and ghosts? Many of us have heard of the Bell Witch, but in April 1880, there was “mysterious knocking under the floor” of a house in Springfield, causing as many as 300 people to loiter in and around the house one Saturday night, waiting for the apparition to make another appearance. “At 1 o’clock Sun-day morning your correspondent counted thirty men lying asleep on the porches and in the halls of the building, and there were as many more on the ground,” the Nashville Tennessean reported. “These men stayed all night, notwithstanding they were repeatedly asked to leave by the family occupying the house.”

Drunk driving was a problem in Tennessee before cars were invented. On Oct. 5, 1885, the Knoxville Daily Chronicle reported that a team of mules had run through Greeneville a few days earlier and overturned its wagon. “The catastrophe may be put to the account of drunkenness,” said the story. “The parties were promptly taken charge of by the town authorities and fined for reckless driving.”

Speaking of cars: In 1906, you would have thought that most Americans realized that automobiles were going to change the world, but that’s not true. Amongst the deniers was the author of a March 19, 1906, Nashville American article. “The automobile may come and it may go, but the demand for good horses will continue just the same,” began the article, in what may be the most inaccurate prediction ever made in Tennessee history.

There is a famous episode of “The Andy Griffith Show” in which a goat eats dynamite, causing Andy, Barney and the mayor to panic out of fear that the goat might blow up at any moment. I used to think this plot line was nonsense until I read an article in the Nov. 11, 1916, Nashville Tennessean. A Humphreys County farmer named James Tatmen was digging a well on his farm, using dynamite for blasting, when a calf wandered up and ate some of the explosive. It “exploded with a deafening roar, heard at the farm house a mile and a half away.”

In 1917, the roads were so bad in Tennessee — especially across the Cumberland Plateau in Marion and Sequatchie counties — that the Jan. 14 Chicago Tribune made the following recommendation to the tourist: Drive from Chicago to Nashville, then “ship his car (by railroad) between Nashville and Chattanooga, with the assurance that he is over the worst of his troubles.”

In the early 1940s, the Van Buren County town of Spencer made national news when women took over its local government. It all started when the mayor died, and for a while, no one took the initiative to call an election to replace him. The women of the Better Homes and Garden Club took action. They called an election (which most of the men didn’t notice). Next thing you know, the town had an all-female council, a female recorder, a female chief of police and a female mayor, Mrs. J.M. Gordon. The all-female government made it illegal to sell beer there. They also “abolished taxes and, to raise revenue, started giving pie suppers, old fiddlers’ contests, amateur theatricals and other forms of entertainment,” according to the March 15, 1942, New York Times.

Finally, since we live in an era when all things Confederate are under scrutiny, get this:

In step with the centennial of the outbreak of the Civil War, Pigeon Forge got a new tourist attraction in 1961. Called “Rebel Railroad,” the five-mile track featured coal-burning locomotives pulling Civil War-era passenger cars. “The route includes runs through mountain passes, up hills, over gorges, with mock battles with Union patrols and spotting of Yankee snipers,” the June 8, 1961, Elizabethton Star reported.

Rebel Railroad became Goldrush Junction in 1964, Silver Dollar City in 1976 and Dollywood in 1986.