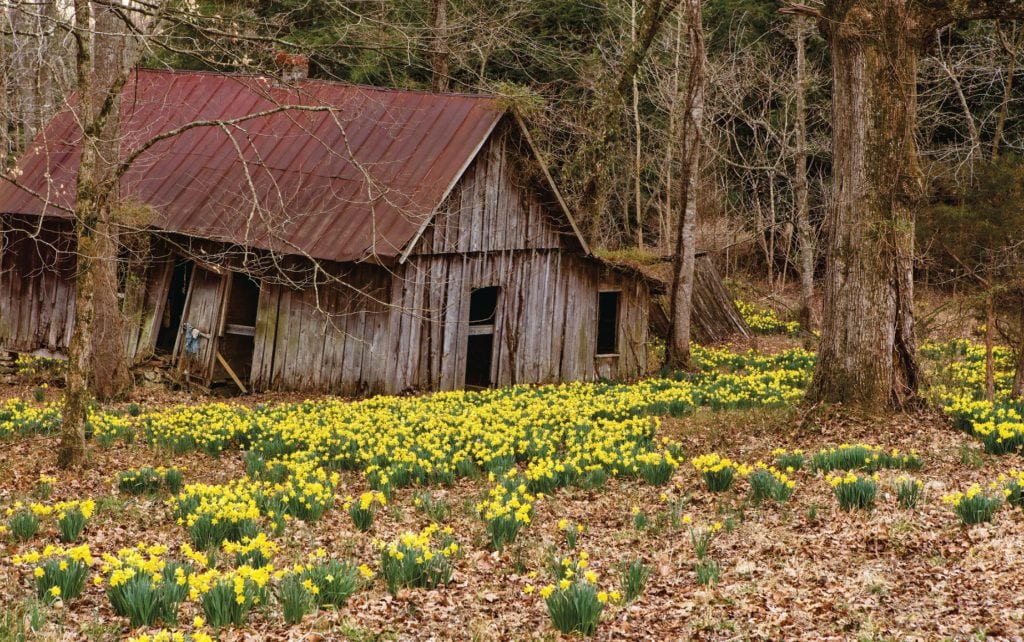 When I see lonely patches of daffodils in the woods, some still bordering dilapidated structures, I wonder who planted them. As daffodils are not native to Tennessee, the original bulbs would have been lovingly planted by someone many years ago. Could that person have ever imagined the flowers continuing to flourish so many years later?

Every spring, a sprawling patch still brightens the landscape of this homestead, above, at Cummins Falls State Park just north of Cookeville. It has spread over the decades to cover more than a third of an acre, surrounding the weathered landmark.

It must have been a welcome sight to see these flowers begin to pop up in the spring after a long winter inside with only a small wood-burning stove to heat the two rooms.

Archaeologists watch for patches like this as daffodils often outline foundations of structures long since lost. Daffodils circled around a depression in the ground may show where a tree once stood, often indicating where the front of the home was located.

With a little research, finding the story behind a subject is often as rewarding as making the photograph. Park rangers Ray Cutcher and Jeremy Vaden helped fill in the history of these Cummins daffodils for me.

The property was granted to Revolutionary War veteran Sgt. Blackburn (his first name is in question) in the 1790s. John Cummins then purchased the land, which included a large waterfall along Blackburn Fork, in 1825. Cummins would build two mills along the river, the last of which was destroyed by a devastating flood in 1928.

Carl and Belle Cummins built this two-room home around 1920 and raised their family there. They probably planted the first bulbs not long after moving in, according to David Cummins, a direct descendant. Carl and Belle raised their three children — Carl Jr., Betty Sue and Bill — in the home, which never had running water. No doubt the family spent many days in the swimming hole beneath the waterfall. The family lived in the home until 1938 when they moved to a newer residence nearby. Sharecroppers occupied the home for several years until it was converted to a tobacco-curing barn.

The property remained in the Cummins family for some 180 years until David and other family members decided to sell the 211 acres to the Tennessee Parks and Greenways Foundation, which, in turn, sold it to the state of Tennessee. It is now protected as Cummins Falls State Park, and visitors can hike to one of the best swimming holes in Tennessee at the base of the falls. The area is rugged and can be dangerous, so be sure to adhere to all posted rules and regulations while enjoying the park.

Because daffodils are tall and bright yellow, it is a challenge to photograph them. On cloudy days free of harsh, direct sunlight, you can capture more detail in the flowers, especially with closeups. Any breeze will make them sway, which means you’ll need to use a faster shutter speed. For the image above, I used a tripod to steady the camera and waited until they appeared to be still before I released the shutter. I included the cabin in the composition in hopes of learning more about the story, and I’m very glad I did.

Researching your subject will help take your images from a mere “Kodak moment” of stopping to smell the flowers to a meaningful image that tells the rest of the story.