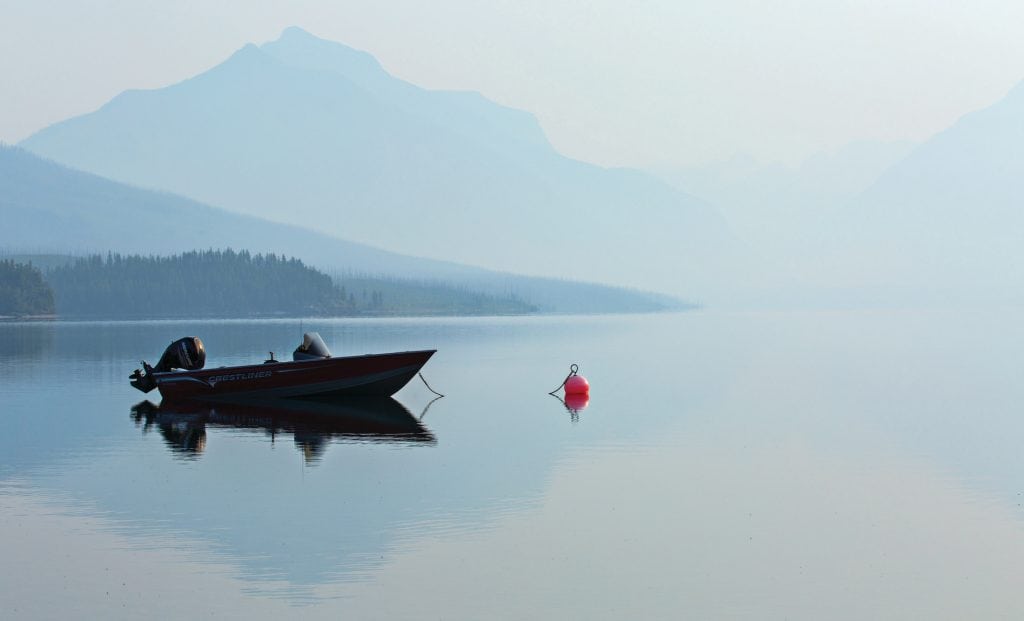 When on photography trips, I feel like I can’t miss any photographic opportunity. That means being up before sunrise and out until about an hour after sunset. That made for a few long summer days last August when I was in West Glacier, Montana.

I began my last day there at the Apgar Visitor Center just before sunrise. I had scouted the area the day before and thought the rental boats moored at the southern end of Lake McDonald might make an interesting subject with the golden light of a brilliant sunrise filtering in from the east or the right side of this image.

I set up my tripod on the dock, composed the shot with the boat at the lower left third of the frame and waited for the light. As it turned out, the sun didn’t break through the haze in the distance until quite a while after sunrise. This meant the streams of sunlight I had hoped to capture as they raked across this landscape just weren’t going to happen. Instead, a light cloud cover and a smoky haze from a nearby fire in Glacier National Park had filled the sky, obscuring the sunrise and the mountains in the background.

As I took this image, I was a bit disappointed that I had missed this last chance to capture what I had seen in my head. So instead, I framed the most interesting composition I could find with the boat as the central subject. As my shot transformed into a monochromatic pallette, the bright red mooring buoy added a glimmer of color that took on a central position in this composition. You might say it creates an anchoring point for your eye as you move through the image.

It wasn’t until just a few weeks ago, when I revisited my edit on the images I captured that day, that I took notice of this one again. Because it hadn’t turned out to be what I wanted that morning, I had largely ignored it. In hindsight, it tells its own story.

I would learn later that the smoke came from the devastating 2017 Sprague Fire that began with a lightning strike to the northeast of Lake McDonald in Glacier National Park the day before on Aug. 10. The devastating wildfire would burn into November, scorching nearly 17,000 acres. It would also consume the historic, century-old Sperry Chalet.

Writing this column almost a year to the day after I captured the photograph, I learned that lightning strikes started this year’s Howe Ridge Fire. It has ignited the closest ridges visible in this image and forced evacuations of the Lake McDonald Lodge. Mother Nature is an awesome power that can change the landscape in an instant — as quick as a lighting strike.