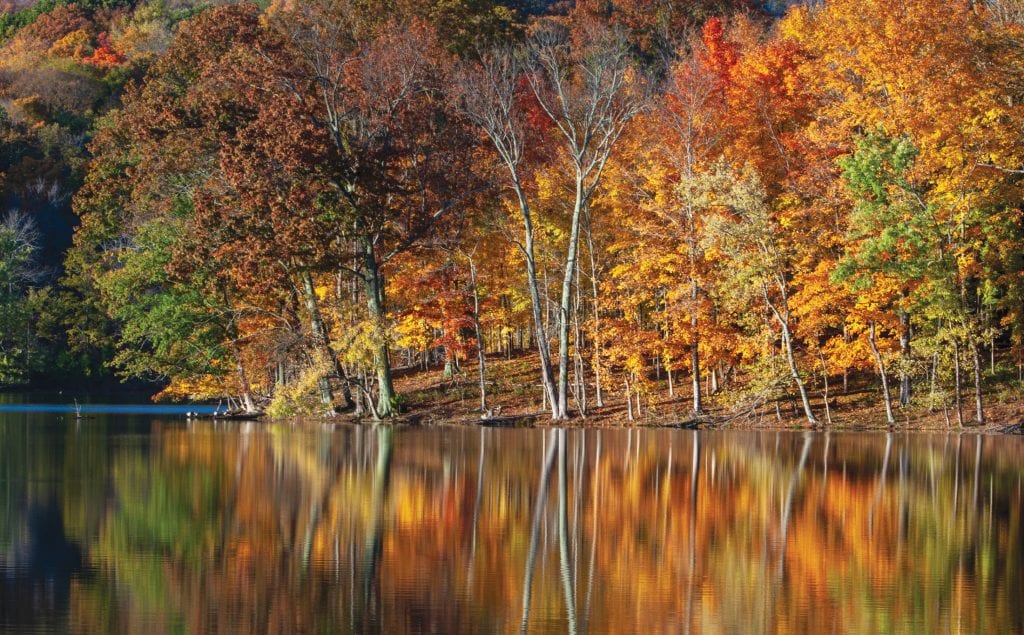 I love the colorful show nature puts on in the fall. In Tennessee, that means the somewhat singular summer color pallette of green explodes into nearly every shade of orange, yellow, red, purple and brown that you can imagine. Capturing the color at its peak can be a challenge, but it’s one I look forward to each year.

Planning for “Fall Color” — as it’s always written in my calendar from late October through early November — is tied to the ever-changing weather. Predictably, the leaves begin changing in the higher elevations of the East Tennessee mountains, and the colors wash across the state as lower temperatures trigger trees to slow their production of chlorophyll. As these concentrations are depleted in the leaves, the sun bleaches out the remaining chlorophyll, revealing the true leaf color.

The science of how fall color actually happens is complex and dependent on several factors, including tree stress from summer droughts, shorter daylight hours, cool nights and sunny days. When all of these variables are just right, the results can be magnificent. Just be sure to capture the vivid scenes before wind and rain of the changing season bring down the leaves.

This image is from a few years ago, during just such a fall when all the elements combined perfectly for a late-afternoon reflection. My favorite time of day to capture fall color is during the “golden hours” — generally an hour or so just after sunrise and before sunset. The sunlight is at a lower angle and warmer and softer during this time of day. Each of these factors adds its own subtle qualities to the light that you can’t capture when the sun is higher in the sky and subjects are much more contrasty. This image was captured about 10 minutes before I lost the light as the sun dipped behind a hill, casting a dark shadow across the trees and erasing the reflection.

Other weather occurrences can often take average photos to the next level. For instance, after cool nights, fog may be present at sunrise, adding another interesting element. Late afternoons can be perfect for reflections in water with the low angle of light and still winds. Less wind means there’s less of a chance that a reflection in water will blur, presenting, instead, more of a mirror surface. You might also want to try using a circular polarizer to help reduce glare from the sun at this time of day.

With so many weather variables at play, the perfect fall shot can be elusive. Plan your fall color photo shoots with some built-in flexibility in location and time. I’ve been on many excursions when the perfect shot did not present itself, but I’ve always tried to enjoy the day regardless. Just being outside is part of the reward for your efforts. Your patience and planning will eventually pay off.