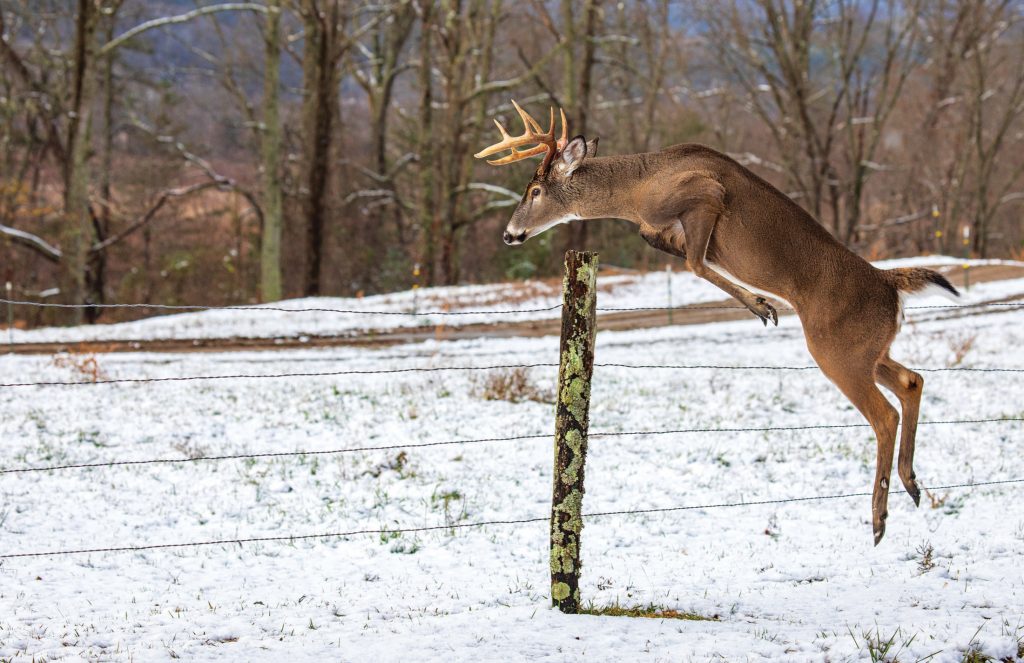 Luck was on my side in December during a quick trip to Cades Cove in the Great Smoky Mountains. In a two-hour window, the weather, the light and happenstance all combined wonderfully, leading to several opportunities.

An evening storm felled a few trees along the Cades Cove Loop, blocking the road to traffic. Rangers were, however, allowing people who wanted to walk in to proceed as park employees waited on the equipment to clear the road. So I took them up on it. After walking in about a mile, I paused to look back toward an area where the sun was beginning to peek over the mountain ridge surrounding the cove.

That’s when I shot last month’s Point of View image, which I captured exactly 12 minutes before this image. I was standing on the gravel road, turned to my left, photographing the light playing through the low clouds and fog on the mountain range, when I glanced back to see this white-tailed buck approaching from a field behind me to my right.

Knowing that he wouldn’t stay still for long, I changed my ISO to a higher setting and increased the shutter speed as much as the light would allow — all as I was moving into a better position to see the buck. In a situation like this, with a long lens like the 100–400 mm I had on my camera, you want to use a shutter speed at least equivalent to 1/(the focal length of the lens) to help cut out any camera shake you cause by hand-holding the camera instead of using a tripod. Faster shutter speeds will also stop the action in the image, freezing the motion of the subject.

I quickly chose 1/800 just in case the buck jumped over the fence. I would have preferred to fiddle with the exposure and shutter speed a bit longer, perhaps choosing a faster speed, but then I would have missed the shot completely.

I focused on him as he grazed. There were two fences, one on each side of the road, and I was in the middle. As two other onlookers had already gathered a bit too close, the buck bounded from a standstill over the first fence. I missed that shot, blocked by a tree between us. But I got another chance when he lept over the second fence and trotted away. The entire encounter lasted only 90 seconds.

Admittedly, I was fortunate to be in the right place at the right time to catch this powerful buck in motion. What a beautiful moment. “Please be in focus, please be in focus…” was the plea I repeated on the drive home.