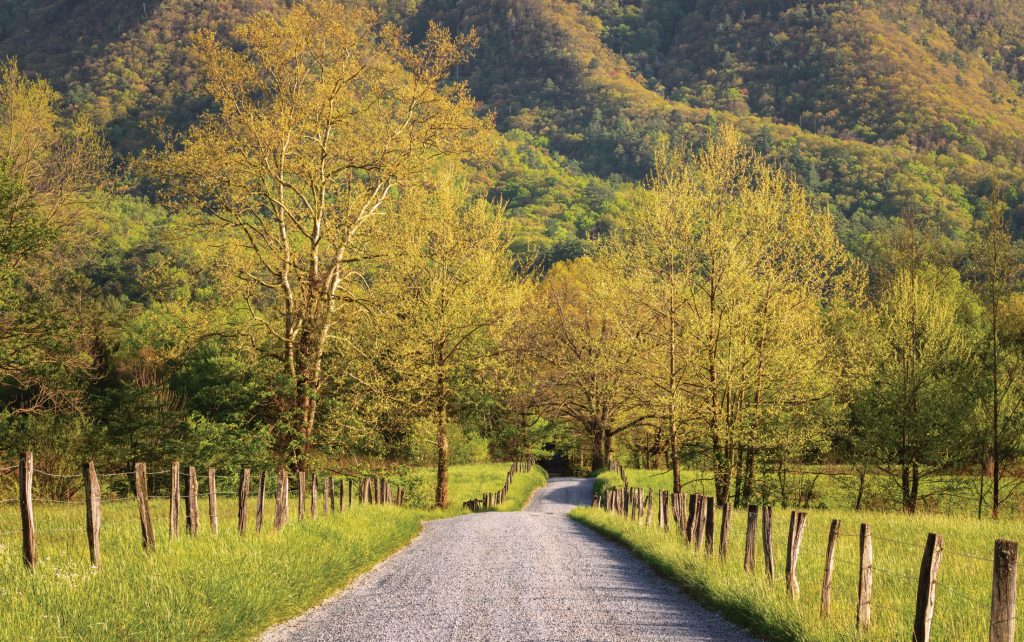 Cades Cove in the Great Smoky Mountains National Park ranks as one of my favorite places to visit, hike and photograph. It is accessible via an 11-mile one-way loop through a fertile valley just south of Townsend on the western edge of the park.

On one such trip earlier this year, I photographed wildflowers, creeks and landscapes. When I first noticed this scene on Hyatt Lane, it presented a nice composition with pretty green trees and a gravel road — all elements that often work well in an image. I thought it would look even better as the sun set, so I decided to stick around.

To pass the time, I walked along Abrams Creek, soaking in the sounds of songbirds and the trickling of the cold, clear water while looking for salamanders and frogs.

I captured the image above about an hour before sunset during the “golden hour.” The sinking sun cast warm, soft light across the cove, adding shadows to the eastern side of the trees, mountain ridges and fence posts. The deep shadows you see during the golden hour help define shapes and add a depth to photographs that a midday sun can’t create because of its high-in-the-sky angle.

I wanted to compress the length of the road and the tree line so that the foreground and center of the photo would be in focus and the mountains slightly out of focus. Choosing a long lens with an f-stop of 20 accomplished the effect.

With my camera on a tripod, I composed the image with the leading lines of the fences and the road at the bottom third of the image to lead your eye into the photo and then up to the top of the trees. Placing it dead in the center would have made the image stagnant. Your eye would have gone to the center and stopped.

Please remember when photographing wildlife to keep a safe distance. It’s against the law to bother or feed any wildlife in any national park. Changing an animal’s behavior because you are too close is unsafe and is considered harassment. These laws are for safety — yours and the wildlife’s.