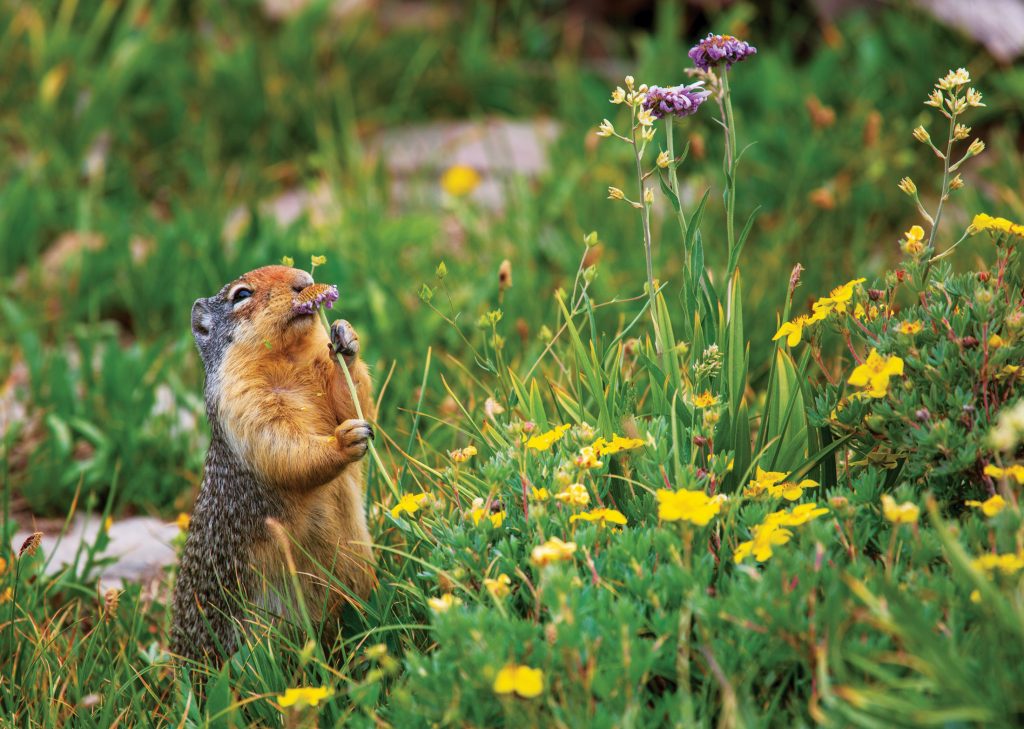 While visiting Glacier National Park a couple of summers ago, I came across this little fellow along the trail at the Continental Divide’s beautiful Logan’s Pass. Several marmots scurried in and out of burrows as others sunned on various-sized rocks and boulders. All seemed to be enjoying the warmer temperatures of an early August afternoon.

This was the first group of these large ground-dwelling squirrels I had ever seen, and they were quite entertaining with many little squeaks and barks as they foraged. They ignored most of the people walking along the 1.5 miles of boardwalks and dirt trails that lead to the Hidden Lake Overlook.

Stopping to watch, this particular individual seemed to have my temperament that we will call slow and deliberate as compared to faster and less observant. He took time to smell the flowers before carefully eating the petals off each Alpine leafybract daisy. I took time to watch him and catch my breath in the thin air of the 6,600-foot elevation.

I watched him very deliberately reach out and smell each flower before deciding if that was one he wanted to eat. The petals were already gone from this one as he pulled it to his nose. He passed on it and moved to the next two on the right, which he ate before ambling away.

When observing wildlife, attributing human emotions such as smelling the flowers and taking a nap to actions of an individual animal can misrepresent what they are doing. For example, a bear or a deer scratching or rubbing on a tree might not be relieving an itch but is probably marking territory to defiantly defend. In this case, my descriptions are what I observed and, I believe, accurate as to what was happening.

Whether it’s a vast landscape or a small slice of animal behavior, observing nature through my lens allows me to focus on moments in time that will never again exist. Capturing these moments and then researching the subjects to learn more about them make each photograph even more rewarding.