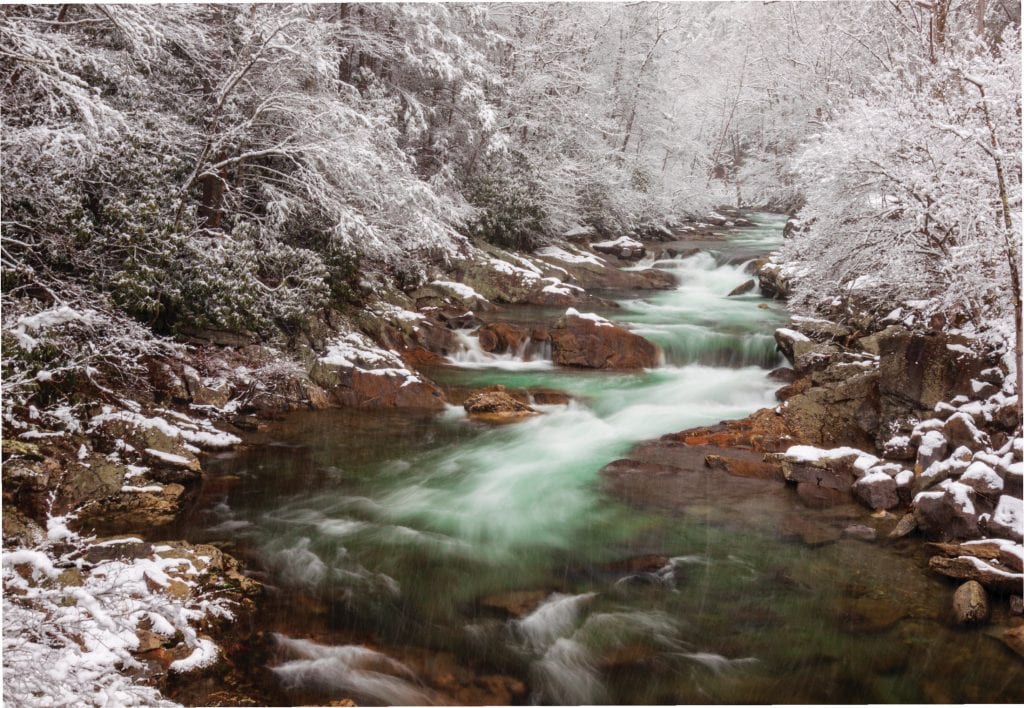 Driving through the Little River Gorge as the road snakes along the sharp curves of the Little River isn’t for the faint of heart, especially in the heart of winter. Following the river’s path for about 20 miles, the road winds through this mountain pass from just south of the Sugarlands Visitor Center near Gatlinburg to Townsend.

Several pullouts offer safe places to stop along the way. Trailheads lead hikers into the woods, to waterfalls or to explore the river’s edge. This scenic area of the Great Smoky Mountains National Park offers numerous photographic opportunities with each passing season. Winter is no exception.

Heavy snowfalls and icing conditions can approach quickly, making travel within the park treacherous, so keep an eye on the weather and stay safe. While photographing the park, I stay up-to-date with road closures and inclement weather via weather apps, the park’s social media feeds and its website, nps.gov/grsm.

The image above presented itself after a heavy morning snow began. It was cold enough that the snow stuck to every tree branch and capped the river rocks, making a beautiful winter scene. And it was cold enough to keep most of the traffic off the road.

It was still snowing as I began to shoot. The snowfall seemed to muffle any noise around me except for the flowing river and the sound of fluffy snowflakes as they plopped upon the ground nearby.

I began photographing the scene by placing my camera on a tripod and choosing a slower shutter speed with an aperture that would give me a good depth of field. This allowed the water to blur and everything to be in focus from the foreground to the background.

The combination that worked was 1/6th of a second at fl22. An added bonus was that the snowflakes were large enough to be slightly visible in the final image.

It was a beautiful, quiet morning.