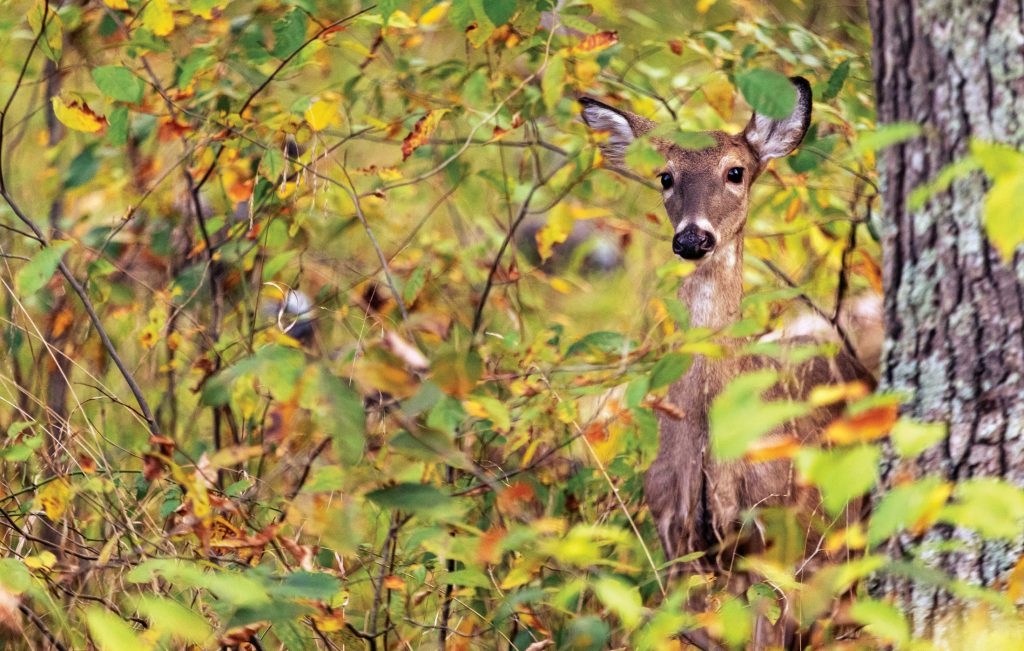 “All things in this world must be seen through youthful eyes.”
— Henry David Thoreau

On a recent walk in the forest, I had that sixth sense speak to me. When this happens, I usually look up to realize I’ve lost track of time or have been so focused on a subject that I’m missing something going on behind my back.

This time, I realized I was being watched — fortunately, not by anything sinister or menacing but by a curious young white-tailed doe.

I had been on a trail since just after sunrise following a rafter, or group of wild turkeys, working through a dense section of undergrowth. The dozen or so hens and three toms scratched through layers of early fall leaves while feeding on what persimmons, seeds and insects they could find. The doe, I suspect, was after the same persimmons.

The desire to feed was strong enough that my presence didn’t seem to disturb either the turkeys or deer. I stayed on the trail — quiet and still — about 20 yards away with a telephoto lens to observe them.

The early morning sunlight that day was hidden by a thick cloud cover. There just wasn’t much light. At one time, back when I was shooting with film, these conditions would have just been too dark. I would have packed it in and already left for the day.

Now, though, with the technology in smartphones and digital cameras, even dark days can be good photography days. The sensors that have long since replaced film as the medium on which our images are captured allow for much more low-light photography. I had a high ISO of 4,000 set on my camera. While creating a bit more digital noise or graininess in image, this allowed me to use a faster shutter speed to freeze the movement of the turkeys and deer in sharp images.

The young doe was soon joined by six other deer, including two fawns. The fawns cavorted like kids, darting and chasing each other, showing off, seemingly without a care in the world.

Nature always puts things in perspective for me.