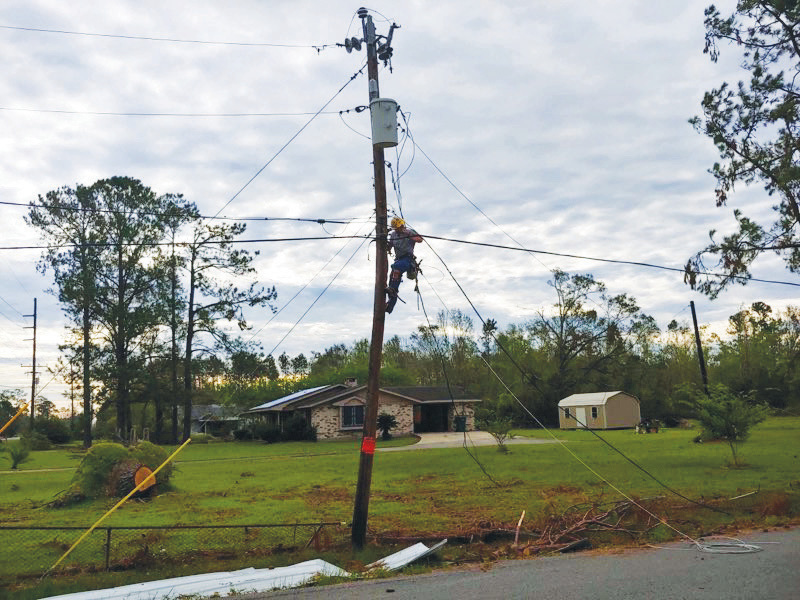 Planning and preparation are important. It doesn’t matter if you’re going on a hike, taking a drive in the mountains or spending a day at the beach. Camping? Don’t forget sturdy shoes, extra socks, snacks and a first-aid kit. That drive in the mountains? A full tank of gas, blankets, emergency road kit and an accessible map (especially if you’re out of cell tower range!). And that beach trip can be ruined if you forgot to bring sunscreen!

J.R.R. Tolkien phrased it in a memorable way: “It does not do to leave a live dragon out of your calculations, if you live near one.”

Whether you’re anticipating minor issues or some unimaginable calamity, preplanning can often greatly lessen the impact when things go awry. Electric co-ops do a lot of preparation in anticipation of things going terribly wrong. It’s not that we’re pessimists; we just know how many things create havoc on an electric system. The weather, though, is one of these variables we obviously can’t control but can plan for.

During February, Tennessee looked and felt a lot more like Alaska. In fact, some days were colder in Nashville than in Anchorage. Adding insult to injury, many parts of our state were hit with snow, sleet and freezing rain — or all three. As we all know, some of us painfully so, ice and power lines do not peacefully coexist.

How does an electric utility prepare for an ice storm? As it is occurring, it’s a matter of hoping and praying that it won’t be too bad. But some planning is done years in advance by clearing the right-of-way, trimming and cutting trees that might be too close to the lines. That’s a costly, time-consuming process that never ends; however, even with the best right-of-way clearing, heavy ice on a line combined with wind can bring down wires, poles and transformers.

As a storm approaches, several things happen. We begin early by anticipating how serious the weather might be. Crews are prepared for work, and trucks are loaded with equipment and supplies.

At our office in Nashville, we follow multiple weather forecasts, many that are specially developed for utilities. Beginning 72 hours in advance of a storm, we use a tool called the Sperry-Piltz Ice Accumulation Index, or SPIA Index. It has been shown to accurately predict the duration, intensity and damage capability of approaching ice storms.

So, if we know the live dragon is coming our way, what is our next step?

Because we maintain close relationships with cooperatives, municipal utilities and other companies throughout the nation, we converse daily with our counterparts in surrounding states. This mutual aid network allows us to bring in extra crews to assist your local cooperative. By knowing the anticipated track, duration and severity of a storm, we can make an educated decision on how much help might be needed.

Before the storm system is in our area, we’ve already been in discussions to get additional assistance, if needed. Depending on the type of storm and the certainty of the forecast, sometimes the skilled help is on the way before the storm hits!

As all of this is occurring, rest assured that everyone works together toward one goal at your local electric cooperative: get the lights back on as quickly as possible while working as safely as possible.

February’s storm carved a wide path of destruction from Texas to New England. Crews traveled hundreds of miles through multiple states to help us in Tennessee as well as our neighbors in Kentucky and Virginia.

An ice storm in February, a tornado in March 2020, and we don’t know what the rest of the year will bring. But we’ll be prepared.

Because it’s not a matter of if — but when.