Speaker from our past 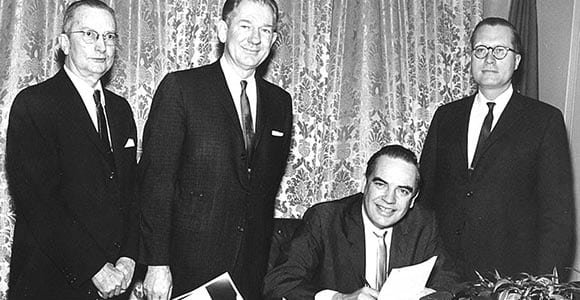 Dick Barry, House speaker in the 1960s, talks about life and Tennessee history

William L. (Dick) Barry is alive and well, living in a big house surrounded by cornfields in Henderson County. What makes that especially noteworthy is he was elected speaker of the Tennessee House nearly half a century ago and served in that capacity from 1963 until 1967.

Mr. Barry doesn’t get out very much, but he still has plenty of friends; in recent months he has been visited by people as distinguished as former Tennessee Gov. Winfield Dunn and State Sen. Douglas Henry.

I visited Mr. Barry and asked him questions about his life, state government and Tennessee history.

My great-uncle, John S. Fielder, was in the legislature from 1921 until 1927. My father was also interested in politics; he was the patronage man around here for the Hill McAlister administration. I remember watching the legislature in 1933 when I was 7 years old.

When did you first get involved?

I ran for election to the Lexington board of aldermen in 1953 when I was 27 years old, and the next year I ran for the Tennessee House of Representatives. I was unopposed that election; in fact, I was unopposed the first four times I ran. The fifth time I ran I had nominal opposition. The sixth time I had an opponent from Madison County, which had been added to my district, and I had to work to get elected. That was the last time I ran because I knew I would lose after that.

Why were you sure you would lose?

It has to do with the history of Henderson County and the district I represented. I am a Democrat, but Henderson County is historically Republican. This goes way back. Henderson County supported the Union during the Civil War. Unlike most of West Tennessee, Henderson County has steep hills, and the soil is such that it erodes easily. Cotton was not big, and slavery was not big. Most of the farms were small here, and most of the people were poor here. That’s why I was only the third person ever from this county to go to Vanderbilt University.

Before 1901, Henderson County had its own House member, and he was always a Republican. Then, in 1901, they worked a scheme where Madison County next door got two legislative districts because of their population. So Madison and Henderson counties shared a district, with a gentleman’s agreement that the representative would come from Henderson County. That meant it would be a Democrat because in the general election the big Democratic majority in Madison County would put him over. This was the sort of trick that the federal government did away with in the Voting Rights Act of 1965.
Since you were a West Tennessee politician, what did you know about Boss Crump?

First of all, his name wasn’t “Boss” Crump, it was Edward Crump, and his critics gave him that title of Boss. Mr. Crump was a political leader who had the support of the people of Shelby County. There was no compulsion, as far as I’m aware. As best I can tell, they adhered to his positions voluntarily. During the time his influence was great, he was able to exercise a disproportionate influence on Tennessee politics. His No. 1 interest was always Memphis and Shelby County. But he did not hesitate to endorse candidates for statewide office.

One other thing about Crump: In 1952, Frank Clement was elected governor, and Buford Ellington was his campaign manager. They went to Memphis after the election to thank Mr. Crump for his help. Mr. Crump said to them as they were leaving his office, “If you boys play it right, you can hold onto that thing for 15 or 20 years.” Well, they held onto it for 18 years — Clement, then Ellington, then Clement, then Ellington.

So what was it like for a legislator when you first got elected in 1954?

When I was first elected, individual House members did not have offices. There was only one real committee room, and that was in the basement of the Capitol. I stayed at the Andrew Jackson Hotel, which is no longer there.

Probably the biggest change since then is that individual state legislators were not in constant contact with their members, as they are today.

How many black legislators were there when you served?

When I first got elected, there were none. When I left, there were two — both from Shelby County. All of that changed dramatically when I left office because of the Voting Rights Act and other things.

How did you work your way up to speaker?

After Ellington got elected to his second term in 1958, I became the floor leader and handled all the administration’s legislation. Gentleman Jim Bomar of Shelbyville was the speaker of the House. He was my very good friend, and I am proud to say that I was to some degree his protégé.

Then, in 1963, Jim ran for and got elected to the State Senate. Governor-elect Clement supported him for speaker of the Senate and me for speaker of the House. I guess the governor did this for reasons that were only known to his inner circle; in those days you had to have the support of the governor.
Was the legislature more or less powerful back then?

The legislature is more powerful today. They have more independence from the influence of the governor’s office, which some think is good, and some do not.

The power shifted from the legislature to the governor during the administration of Austin Peay, who died in office in 1927. It did not return to any considerable degree until the mid-1950s.

What things that happened when you were speaker stand out in your mind?

In 1963, Sen. Estes Kefauver died. Governor Clement called me that night, about midnight, and told me. Clement also told me that he wanted to be appointed to replace Kefauver as senator and for State Sen. Jared Maddux, who had previously been lieutenant governor, to become governor in his place.
Maddux and I met him in Cookeville and talked him out of it. We knew that the voters didn’t like that sort of thing and that if he did that, we thought he’d lose the next election. After all, the people of Tennessee had elected him governor. Once they do that, they don’t want you to shift over and become a senator. So, instead, Clement appointed Herbert Walters to take Kefauver’s place.

Is that the only time you disagreed with Clement?

That very afternoon, Gov. Clement went to the penitentiary and commuted the sentences of the men on death row, and he also gave each of them a Bible, as I recall. So we disagreed on that. But this did not affect Clement’s support of me.

Lyndon Johnson was president when you were House speaker. Did you meet him?

Yes, a couple of times. My most amusing encounter with Johnson was on March 15, 1967 — Andrew Jackson’s birthday — when he came to the Capitol to speak to the legislature.

My office was right next to the governor’s. For some reason he was really tired that day, and he came in and laid down on my sofa to rest before he spoke to the legislature. I walked in, and there he was. I could tell he didn’t know who I was, but I knew exactly who he was. So the president of the United States closed his eyes and rested on my sofa.

What is your favorite thing from Henderson County history?

The largest man who ever lived was in Henderson County. His name was Mills Darden. He was born in 1799 in North Carolina, died here in 1857. He was 7 feet, 7 inches tall and weighed more than 1,000 pounds. Like most thousand-pound men, he was sensitive. So he wouldn’t let you take a photograph of him, and there is no picture of him.